United Airlines has launched its United Aviate Academy and already begun training its first class with a goal to help alleviate the pilot shortage. 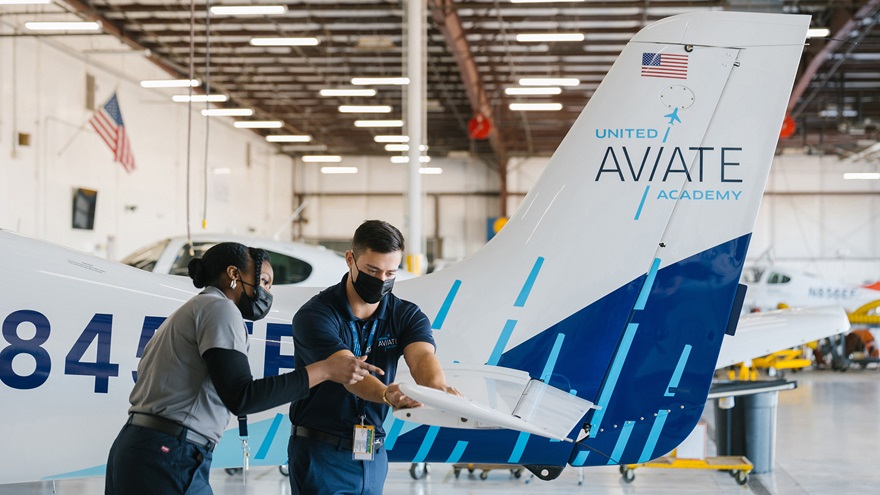 The United Aviate Academy officially welcomed its inaugural class on January 27, aiming to train 5,000 new pilots by 2030, with at least half of them women or people of color. The first class surpassed that diversity goal, with 80 percent of the trainees contributing. Photo courtesy of United Airlines.

A secondary goal of the academy is to train more women and people of color, United said. The inaugural class of 30 is 80 percent women and people of color. United plans to train about 5,000 new pilots through the program by 2030, enrolling between 25 and 50 students each month with a yearly goal of 500. The company said it plans to hire at least 10,000 new pilots by 2030.

Acknowledging the cost of pilot training, United said it is working with JPMorgan Chase & Co. to fund nearly $2.4 million in scholarships. The airline is working with the Organization of Black Aerospace Professionals, Sisters of the Skies, the Latino Pilots Association, and the Professional Asian Pilots Association to educate prospective pilots and find scholarship candidates.

Admission to the program requires a high school diploma or GED equivalent. Once accepted, applicants don’t pay for private pilot training. They will pay for advanced ratings and certificates, from instrument through multiengine flight instructor, estimated at $71,250.

When participants complete training, they’ll build flight hours at one of Aviate’s partner universities or flight schools, or fly for one of the company’s Part 135 cargo operators. They’re then eligible to begin flying for a regional partner airline, including Air Wisconsin Airlines and GoJet Airlines.

Once minimum service and flight hour requirements are met, candidates can transition to first officer positions at United.

The Aviate program appears to be off to a brisk start, with 9,600 applications received since the program opened.

The flight school is located at Phoenix Goodyear Airport in Goodyear, Arizona. Students train with a fleet of Cirrus SR20s.