Get the app Get the app
News & Media What Went Wrong? 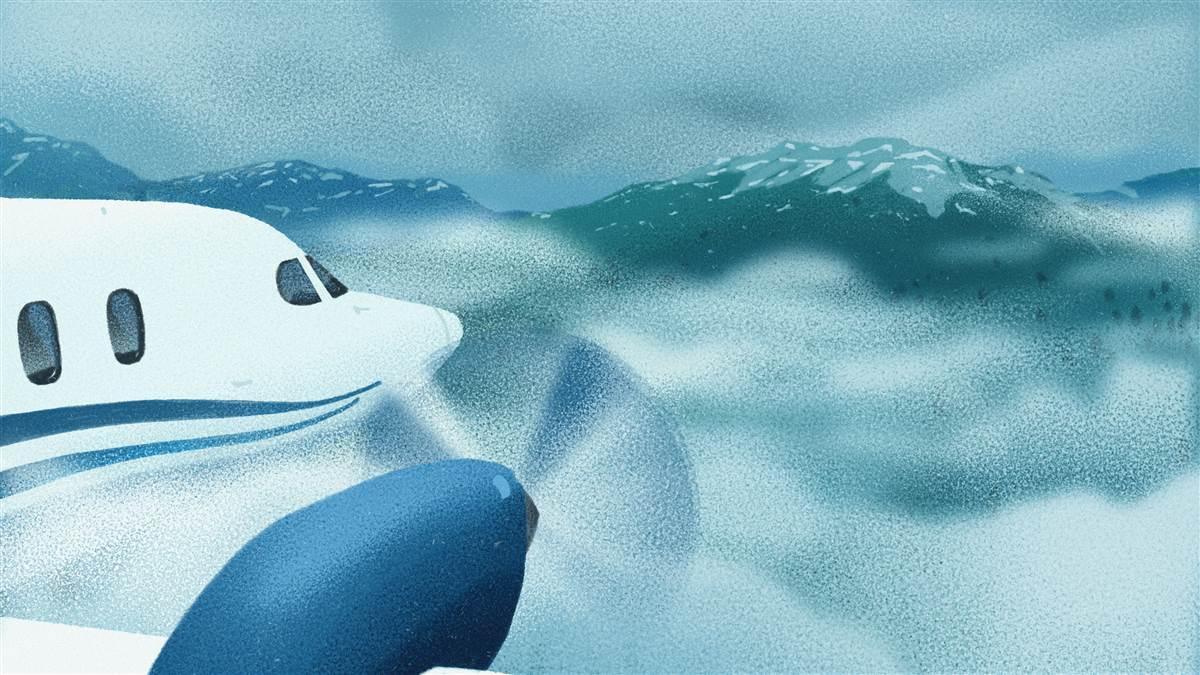 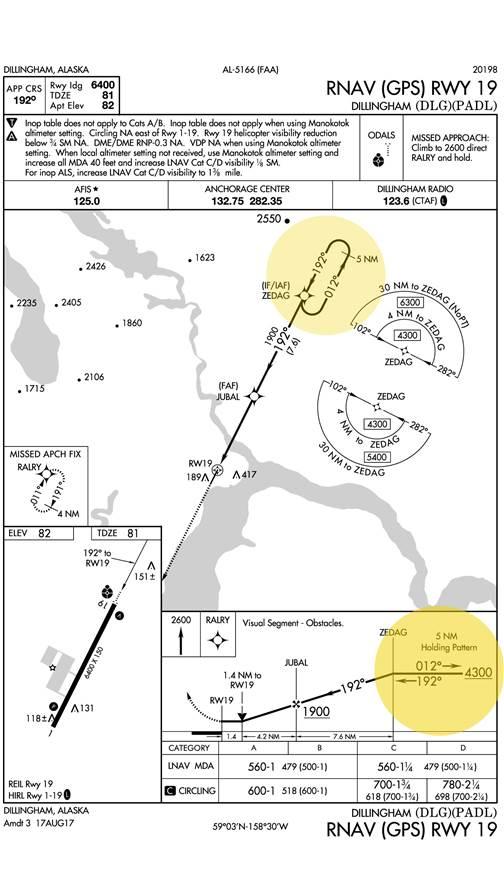 The captain and first officer were the only souls on board, and the short, coastal route would primarily overfly flat marshland. Even so, few sections of the Last Frontier are free of terrain, and a mountain range begins less than 10 miles northwest of the destination airport.

The airline transport pilot captain had over 5,700 hours of total flight time, 5,400 in the Beech 1900, and the vast majority of which was in Alaska with his current employer. The commercial multiengine pilot first officer had 470 hours, with 250 hours in type. In December 2012, both crewmembers had completed Part 135 proficiency checks that included instrument procedures with all tasks marked as satisfactory.

Beyond being an IFR-equipped aircraft with no history of maintenance issues, the Beech 1900 also had a BendixKing KMD 850 multifunction display capable of providing aural and visual terrain warnings. The airplane was outfitted with dual Garmin 430W units capable of providing visual terrain alerts. The warnings on both systems could be inhibited by the flight crew to prevent nuisance alerting.

The Dillingham weather observation reported an overcast cloud ceiling at 1,500 feet, wind from 100 degrees at 17 knots gusting to 30 knots, 7 miles visibility in light rain, a temperature of 34 degrees Fahrenheit, a dew point of 32 degrees Fahrenheit, and an atmospheric pressure of 29.09 inches of mercury. Instrument conditions prevailed along the route of flight, which had a direct-line distance of only 62 nautical miles. The winds, the pilots decided, favored Runway 19 via the RNAV/GPS approach.

Thirteen minutes into the flight and about 30 miles away from the initial approach fix, ZEDAG, the pilots made their approach request to Anchorage Center.

“Anchorage Center Ace Air fifty-one, current weather down into Dillingham, requesting RNAV one nine approach,” one pilot said. “Any chance we can get direct ZEDAG?”

“Ace Air fifty-one cleared direct to the Dillingham Airport via direct ZEDAG, ZEDAG transition. Maintain…maintain at or above two thousand until established on a published segment of the approach. Cleared RNAV Runway one niner approach to Dillingham Airport. Remain this frequency.”

“We’ll stay with you. Cleared to ZEDAG transition for RNAV one nine approach into Dillingham. Maintain two thousand until a published segment of the approach Ace Air fifty-one.”

ZEDAG is located to the northeast of the runway. During the readback, neither the pilots nor the controller acknowledged that the minimum safe altitude for the ZEDAG transition when approaching from the southeast is 5,400 feet—significantly higher than the altitude the pilots believed they’d been cleared to. The pilot’s readback of maintain two thousand rather than maintain at or above two thousand was also incorrect, yet the controller did not correct it, and the Beech 1900 began a descent to 2,200 feet.

Six minutes later, the airplane’s trajectory generated aural and visual minimum safe altitude warnings on the controller’s radar display, which included a one-second aural alarm at 8:09:16 and a flashing MSAW indication in the airplane’s data block that would continue until the end of the flight. The controller did not issue any terrain conflict alerts or climb instructions to the flight crew. A few seconds later, the pilots made a request:

The pilots entered the hold at 2,200 feet; the published altitude for the hold is 4,300 feet. Moments later the airplane disappeared from the controller’s radar display, and over the next several minutes, Dillingham Flight Service Station and Anchorage Center tried to reach the pilots, but were met with silence. At 8:35 a.m. the FAA issued an alert notice, and at 8:54 a.m., search and rescue operations were initiated.

The wreckage was found the following morning. A post-crash investigation indicated that the aircraft hit steep, snow- and ice-covered terrain known as the Muklung Hills about six miles north-northwest of ZEDAG at 1,996 feet in a wings-level attitude. Both pilots died on impact.

The NTSB listed the probable causes for the accident to be the flight crew’s failure to maintain terrain clearance, which resulted in controlled flight into terrain in instrument meteorological conditions. Contributing to the accident were the flight crew’s failure to correctly read back and interpret clearance altitudes issued by the air traffic controller, their failure to adhere to minimum altitudes depicted on the published instrument approach chart, and their failure to adhere to company checklists.

Also contributing to the accident were the air traffic controller’s issuance of an ambiguous clearance to the flight crew, which resulted in the airplane’s premature descent; his failure to address the pilot’s incorrect read back of the assigned clearance altitudes; and his failure to monitor the flight and address the altitude violations and issue terrain-based safety alerts.

This is a rare accident where probable cause is listed for both sides of the push-to-talk, and a stark reminder that approach briefings are a requirement for a reason and not a formality to trivialize or rush through. They are especially important when on familiar approaches as pilots tend to forgo a briefing when they believe they have the “plate” memorized—but complacency is an equal opportunity killer.

The instrument flying system is designed with checks and balances that, when functioning properly, allow us to fly hundreds of miles without seeing the ground and end up in a spot within a few feet of our target. Those checks and balances include a standard, accurate clearance from the controller and a correct readback from the pilots. In this case, neither was achieved. The instruction to maintain at or above 2,000 feet from ATC is a critical reminder that before descent on any flight; and especially on an instrument flight plan in IMC, a pilot should be completely sure that there will be no terrain conflicts, and double-check minimum safe altitudes.

Part of the company’s standard operating procedures included an approach briefing, as should be done on every instrument flight. It seems that the pilots either did not brief the approach, or did not brief it properly. This route was relatively short at only 62 miles direct, and it’s possible that the pilots were behind the aircraft even before departure. Short trips, especially in IFR and IMC, compress the time we have to complete tasks and because of that, are often much more challenging than long trips. Had the pilots reviewed and understood the approach, they would have likely adhered to the minimum safe altitudes.

The hold was unplanned for and unbriefed, and added another step to the flight to gain information about the runway surface conditions—information they could have acquired earlier. The pilots were cleared to hold as published, which would have required a climb to 4,300 feet. The change in clearance from the assigned altitude (which they believed to be 2,000 feet) to the published altitude, and failure to comprehend that holding as published required a climb, led them toward disaster. While the pilots were far below the published safe altitude, they would not have hit the terrain had they bypassed the hold as originally anticipated.

Further, the captain’s day started around 4:30 a.m. the day of and day prior to the accident. Two days before the accident his duty day began at 3:30 a.m. The first officer had similarly early days with one rest day earlier in the week. While they were professional pilots who did this regularly, a series of early morning flights can take its toll in small ways, especially after multiple days of early flying.

The controller had multiple opportunities to warn the pilots of their low altitude, but for whatever reason, did not. The radar scope itself gave out low altitude warnings, but this too did not trigger a call to the Beech 1900. According to a controller who worked in the facility handling the accident aircraft, the aural alarm sound for a conflict alert and the sound for MSAW alerts were similar, and frequently sounded in the control room. The accident controller further stated that aircraft on visual approaches will almost always cause an MSAW alert. It’s possible that the frequent MSAW nuisance alarms conditioned controllers to be less attentive than they otherwise would be, and that could have been a factor in the controller’s failure to give a terrain conflict alert or instruction to climb. But the erroneous decision to descend and stay low was made by, and a responsibility of, the pilots.

One final tool that may have prevented this accident was the onboard terrain warning system. The multifunction display and onboard GPS systems would have given both aural and visual warnings of the pilots’ low altitude. However, it is common in terrain-heavy areas, such as Alaska, for warnings like these to be silenced, or “inhibited” during all phases of flight to avoid what some pilots may perceive as an irritating, distracting, unnecessary warning for an obvious risk factor.

Damage to the devices post-crash precluded testing for functionality, but the pilots made no report of an issue before the flight. The highest point of the Muklung Hills is 2,500 feet. If the pilots or air traffic controller had noticed anything amiss, it would’ve taken mere seconds for the powerful Beech 1900 to climb those 100 feet and miss the terrain.

Unfortunately, despite the checks and balances and tools available to both the pilots and controllers, this flight ended in a preventable tragedy. As pilots, we are trained to trust ATC. They are the voices that guide us down in bad weather, help us see traffic, and keep us safe. But everyone can make mistakes and pilot-in-command responsibility can’t be overstated. This accident is a sobering reminder that procedures as simple as briefing an approach exist for a reason, that terrain warning systems can help prevent tragedy, and that instruction from ATC should be verified first, trusted second. While controllers are often key components of successful instrument flight, pilots are the ultimate authority for safety of flight, and the ones who must pay the price if that safety is not maintained.