An end to the means changes their minds 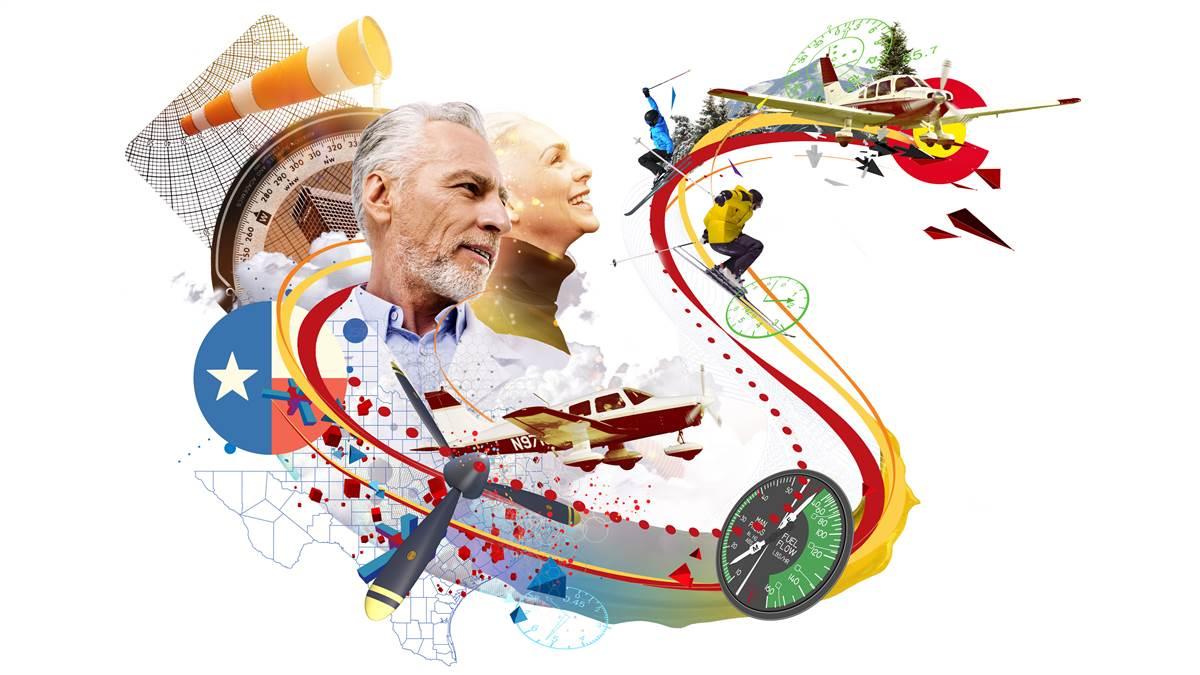 How did we get into this quagmire of flying and even owning an airplane? As always, every story has some very strange twists and turns, as does life. I want to share our story, and, maybe, it will influence someone else to get into an airplane and try it out.

It all started with our buying a home in Breckenridge, Colorado. We like to ski, the kids like to ski, and the grandkids like to ski. So, we bought a house. But we live in Texas and we don’t plan on leaving. We have a home on Possum Kingdom Lake and love it here. Our problem started with the 13-hour drive to the ski house. With dogs, the drive lengthens to 14 hours and with three dogs (we dog-sit for our sisters for a month at a time), we have to do the drive in a straight shot because no hotel will book you a room with three dogs.

A 14-hour drive gives you a lot of time to think up crazy ideas and plans. Ours was to get an airplane so we could fly in less than three hours. Let it be known, we knew nothing about airplanes, nothing about flying, and nothing about the regulations. And to make it just a little worse, as if it could be, we had no passion for getting into the air. At ages 66 and 67 respectively, my wife and I could not have cared less about flying. Our plan was to get our certificates and an appropriate airplane and hire a pilot to fly with us up to Breckenridge every three weeks or so. Seemed like a good plan to us at the time.

We signed up for lessons at a local flight school and then went online to find an airplane. Remember, we still had zero passion for flying. We did our discovery flight and about 10 more hours in the airplane and still could not have cared less. We were in bed one night and talked about what the heck had we gotten ourselves into. Maybe we had made a big mistake and should cut bait right now. But, we decided, in for a penny, in for a pound, and, not being quitters, we signed up for many more weeks of training.

Now about the passion part. I recently heard a TED Talk and the speaker said most of us approach life all wrong. We are told to “follow our passion,” yet most young people have no idea what that even is. They get a degree from college and yet still have no idea what kind of job or life they want. She quoted studies that said passions yield very mixed results for actions. Passions die quickly and then so do the actions that followed that passion. Her advice was to flip this philosophy 180 degrees. When actions turn into passions, the effects are orders of magnitude longer lasting and generate much more happiness. My wife and I can certainly attest to this. We started with zero passion but lots of intentions and actions. After 70 hours in the beat-up old Piper Warrior, we are passionate about our flying. We love climbing into that dinky little airplane and sending it into the sky. We cannot wait until our Saratoga is delivered and we get to send it into the sky. And now, we are passionate about going straight into IFR, mountain, and spin training. This airplane no longer represents a fast bus ticket to Colorado but rather an adventure into $100 hamburgers and exploring every remote corner of this country. I hope that everyone who has this wild idea to fly but says to themselves, I am too old, I am too busy, I don’t want to go back to school, and I just don’t know if I have the passion for it, understands that it is a crazy adventure worth every dime and hour spent chasing it.

There is a saying that I will paraphrase, “You can go through life and end it with a body that you have carefully preserved and cared for, or you can slide into home beaten and battered with a beer in one hand, chocolate in the other yelling, Woohoo, what a ride.” We have chosen the latter and it continues to be one heck of ride.