EAA AirVenture opened on July 25 with somber news that Tom Poberezny, whose father founded the event, and who succeeded his father leading the Experimental Aircraft Association for many years, died hours before the show that he built into a world-class event began, following a brief illness. 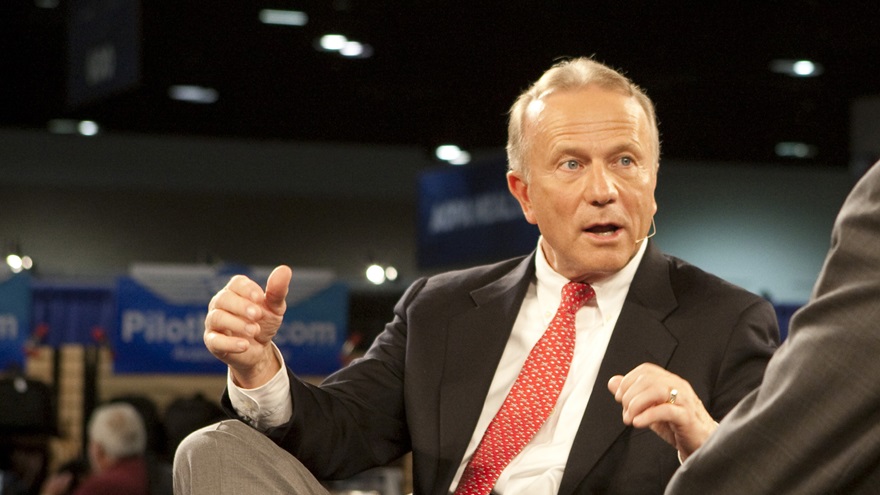 Tom Poberezny, who built EAA AirVenture into what we see today, died July 25 after a brief illness. Photo by Chris Rose.

News of Poberezny's death at age 75 arrived as AirVenture began, prompting a missing man formation and tributes from friends and colleagues who shared stories of his numerous contributions to general aviation and EAA. Chairman from 1989 to 2010, Poberezny succeeded his father, Paul Poberezny, in the role. Paul Poberezny and wife Audrey founded EAA together in 1953.

“An accomplished aviator in his own right,” Poberezny’s EAA biography notes, “Tom was a member of the U.S. National Unlimited Aerobatic Team that captured the World Championship in 1972. The following year, he won the U.S. National Unlimited Aerobatic Championship. He subsequently flew for 25 years as one wing of the legendary Eagles Aerobatic Team (originally the Red Devils), the most successful civilian precision flying team in history.”

As a leader of EAA, Poberezny built what his parents began into the largest aviation event of its kind in the world, drawing more than 500,000 visitors and tens of thousands of aircraft each year.

“His role was sort of professional management,” said Dave Hirschman, AOPA Pilot editor at large. “He was this very engineering-minded guy. He was a hugely accomplished aerobatic pilot…he flew with the Eagles Aerobatic team for many, many years…total precision, total professionalism and…he sort of brought that attitude to EAA and he really tried to grow it as a professional business. He succeeded in a spectacular way in growing AirVenture, in fact…under his leadership, they named it AirVenture. He built EAA, and made Oshkosh really the central focus of the organization and the aviation universe.”

“This event as it is today would not be what it is without Tom Poberezny,” Dick Knapinski, EAA director of communications, said. “Tom became chairman of the fly-in in the mid-1970s and before that it was primarily homebuilders, vintage warbirds, things like that.”

Visits from the record-breaking Rutan Voyager aircraft and Concorde were at top of mind as Knapinski recalled how Poberezny helped AirVenture grow from a convention just for flyers to an event for everyone, with dazzling daily airshows, big-name exhibitors and sponsors, scores of education and training seminars, and an assortment of vendors providing every aviation product imaginable. “First of all I remember Voyager coming here before it went to the Smithsonian, it came here twice. He brought Concorde here. Only the fourth American city Concorde had ever landed was Oshkosh, Wisconsin. You think about that legacy, that just, that doesn’t happen.”

“When you consider his legacies,” Knapinski continued, “number one, the growth of AirVenture, number two, the development of the EAA Aviation Center including the museum….Three, the Young Eagles Program, 2 million kids flown free of charge by EAA members…he spearheaded that…and finally four, on the aviation side, the development of sport pilot, another access point to aviation…he worked on that for a decade to make that rule change possible. And so, when you think about that, that’s a tremendous legacy to leave for aviation, for EAA, for Oshkosh.”

Poberezny also had a passion for aviation history. “In 2002‐2003,” his biography said, “Tom played a pivotal leadership role in the national centennial celebration of flight. He was a member of the Centennial of Flight Commission, a six‐person board empowered by Congress to coordinate and publicize the nation’s commemoration of the Wright brothers’ historic first flight. At the same time, he led EAA’s Countdown to Kitty Hawk program, which commissioned the construction of the first completely authentic reproduction of the 1903 Wright Flyer.”

EAA CEO and Chairman of the Board Jack J. Pelton said in the EAA Facebook post, “It is not lost on us that Tom’s passing occurred on the opening day of EAA AirVenture Oshkosh, the event he led into world prominence as its chairman beginning in the 1970s…Tom’s legacy is tremendous in the world of aviation with his personal achievements as well as the growth of EAA, especially the development of the current EAA Aviation Center in Oshkosh, the Young Eagles program, and the creation of Sport Pilot nearly 20 years ago. He will be greatly missed but more importantly, he will be remembered for all that he did for EAA and aviation.”

“This is the greatest aviation show on earth, and it started with his father,” AOPA President Mark Baker said. “I’ve been coming to this show on-and-off, mostly on, for 45 years and became good friends with both of them; mostly Tom in the last number of years. We traveled and had a lot of fun together. He was quite a showman. We’ve all benefited from Tom’s diligence and excitement around all things aviation. He was a good friend, we’re going to miss him. He made a big difference in our world.”