Get the app Get the app
News & Media Character counts

The windsock tells you more than speed and direction

As Clint Eastwood (Harry Callahan in Dirty Harry) said,  “A man’s got to know his limitations,” and that applies to pilots, too. 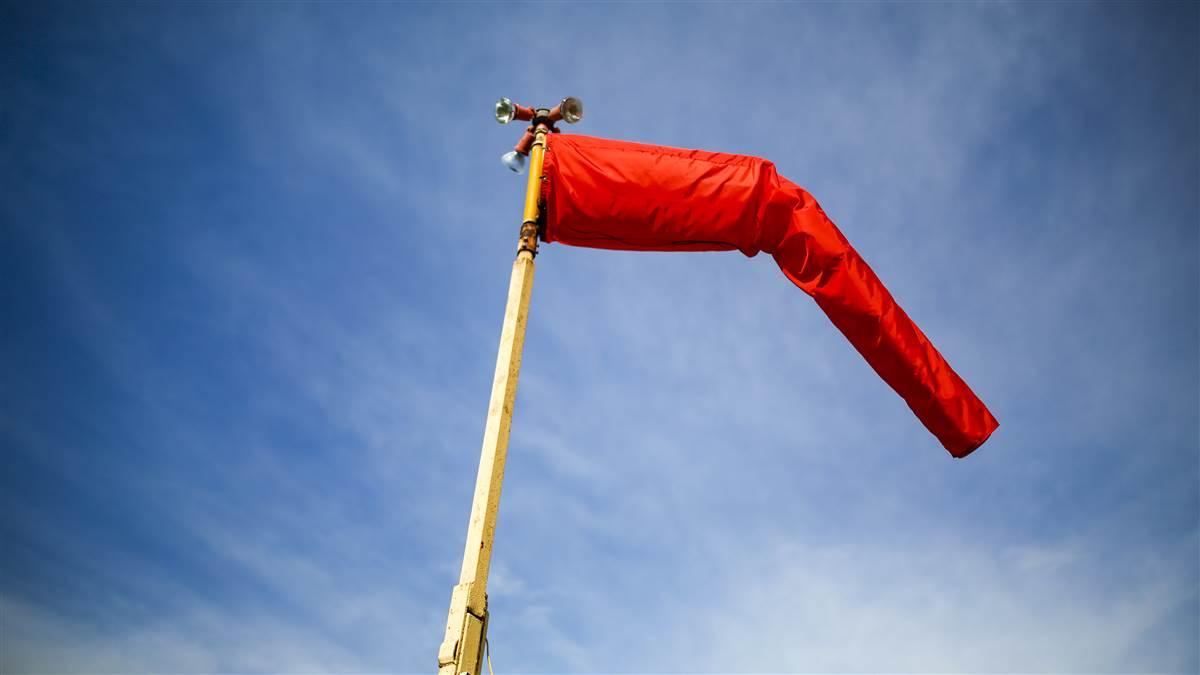 Every airplane has a placarded maximum demonstrated crosswind for landings, and the same is true of every pilot. Our individual wind skills are a function of training, experience, common sense, and confidence, and every pilot possesses a different combination of those factors. However, when training is combined with real-life, head-to-head wrestling with winds they would normally avoid, pilots can learn to handle far more wind than they think they can. Understanding what the windsock is telling you is one of the mental skills necessary to do that.

In addition to the speed and direction, the windsock tells you what skills will be needed and how hard you’re going to have to work to make the flight comfortable.

How do we read velocity in a windsock?
A standard FAA windsock won’t be picked up from hanging until it is seeing three knots or so. It will be fully extended at 15 knots, although there are some 20- and 25-knot socks out there. Generally, if the windsock has alternating white and orange bands around it, each band represents three knots of wind. The number of bands from the pole to the band where the sock bends down gives the speed in three-knot increments. However, most socks are a single color, usually orange for increased visibility. In that case, estimate how much of the length is straight out and how much is bent, and determine what percentage that is of 15 knots.

Wind seldom flows smoothly like the wide river people like to think it does. The wind-river almost always contains invisible eddies and swirls.If you see a sock so stiff that it looks as if it is made of sheet metal, that’s nature’s way of telling you to leave your bird in the barn.

Wind stability, gusts, and gusts
A windsock that points in one direction and pretty much stays there is one thing. One that is continually waving around is a different matter.

As the wind changes direction, the wind experienced on the nose of the airplane changes with it. If the changes are slow and smooth, they have an almost unnoticeable effect in the cockpit. If, however, the changes, right and left, are much faster and across a wider angle, then the airplane will continually require attention to keep the nose where you want it. 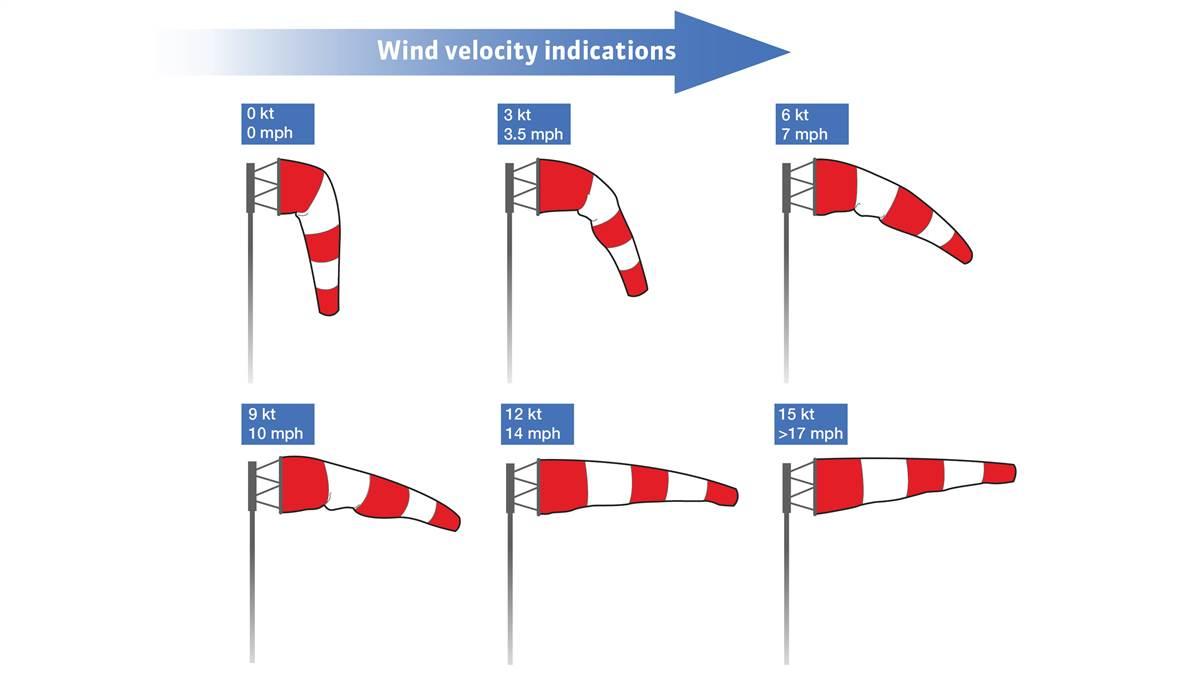 A check of the windsock at your destination airport allows you to choose the runway most aligned with the wind. At airports with one runway surface, choosing the direction with a headwind allows you to land with a much shorter ground roll and much less energy than landing on the opposing runway. Airports with a crosswind runway also allow you to choose a runway that minimizes the crosswind on landing, requiring less correction to counter wind drift and maintain alignment with the runway. Since windsocks point in the direction of the wind and you will be landing opposite the wind, you can visualize the airplane flying out of the larger end. —SD

These changes in wind direction are not to be confused with gusts. True gusts are a sudden change in wind speed that could be likened to an ocean wave rolling in. In front of the wave, there is no indication it’s coming. Then it rapidly peaks, hits us, then just as rapidly disappears. All gusts are built around that concept. However, the character of gusts can vary wildly, and these differences are clearly shown in the way the windsock reacts.

Gusts are numerically quantified on the ATIS, AWOS, or ASOS broadcast, but not all airports have automated weather reports. So, depend on the windsock for gust info. When the wind is whipping the sock from slack to stiff and back again, it’s next to impossible to categorize it with a specific number. However, you can develop an eye for the motions and mentally catalog them as being high or low, a threat or a nuisance. Do they look violent or just pesky? That’s a relative comparison that can only be made after spending some time studying the sock and comparing what you see to what you’ve seen in the past.

The wind may be reported as “10 gusting to 15” or a gust spread of five knots. How you view gust spread depends on what kind of airplane you’re flying. Depending on the airplane, five knots may not be worth worrying about. If, however, the reported spread is 10 knots, pilots of most general aviation aircraft need to pay more attention to it. The degree of worry attached then builds exponentially with further increases: the difference between a 10-knot gust spread and a 15-knot spread, in terms of how it will affect you, is much more than 50 percent. And the difference between a 10-knot spread and a 20-knot spread raises the question of whether you should be flying at all.

Gusts can become especially dangerous when they are not aligned with the main wind. The sock is stiffened and pointing in one direction, then it instantaneously whips in another direction at an obviously higher velocity. Most training aircraft are going to get bounced around.

A special wind situation, one to be avoided, is when the wind is 90 degrees to the runway, but violent, off-heading gusts are taking the wind behind the wing tip. When the wind suddenly jumps behind the wing, there may be a sudden loss of lift. Here the airspeed drops in a heartbeat and the airplane momentarily sinks. If this happens while the airplane is being flared for landing, it can smack the runway.

Windsock locations on the field are important
Many windsocks are located mid-runway, which is not where pilots need them. They really should be about where you’re going to be touching down, so you have a good indication of what to expect right before touchdown. That’s when you’re the most vulnerable.

It’s also worth noting that windsocks are often affected by nearby topographical features, buildings, or trees. Most airport operators try to locate socks out in the open where they are getting the same air that the runway is getting.

Regardless of where the windsock is located, it can’t tell you what to expect when you’re low on short final. If there’s any kind of vertical drop-off at the end of the runway, for instance, odds are that when the wind is really blowing there will be a downward curl just short of the threshold. Windsocks can’t tell you what’s happening off the runway, but they can at least give you a hint of what to expect.

What the windsock can’t tell us
There are two distinct bits of information windsocks can’t give: They can’t tell you how the wind slows down as you get closer to the ground (the velocity gradient) or the way the wind changes as you travel down the runway.

Wind speed is always zero in boundary layer right on the pavement. Then it increases up to about 15 feet, where the windsock is tethered and where sensors probably measure the wind speed. It is not a constant gradient. Every wind will be a little different and sometimes this difference can surprise you. Crosswinds that are still strong close to the ground demand much more dramatic corrections in the last few seconds of the landing.

A windsock gives lots of information, but only for the exact spot where it’s mounted. It can’t tell what the wind is doing 500 or 1,000 feet either direction down the runway. For that reason, the wind experienced on landing is almost never exactly what the sock predicts. And the wind you experience on landing may change several times. Wind seldom flows smoothly like the wide river people like to think it does. The wind-river almost always contains invisible eddies and swirls.

The western part of the country is especially known for winds that are often circular in nature. They are like small cyclones, so windsocks at opposite ends of the runway are sometimes pointing at each another. Those are wind conditions in which there is no “right” direction to take off or land. Every direction is downwind. Only if there are windsocks at opposite ends of the runway can a pilot know that.

The windsock gives lots of clues, but it can’t possibly tell the whole story. That being the case, revert to the basic rule of aviation: Fly the airplane. Deal with the situation as it develops—which pretty much summarizes what it means to be a pilot.