All searches are ultimately visual. When you’ve gone missing, your electronics will only get your rescuers so close. At some point, they’ll actually have to see you. I learned this lesson the hard way. 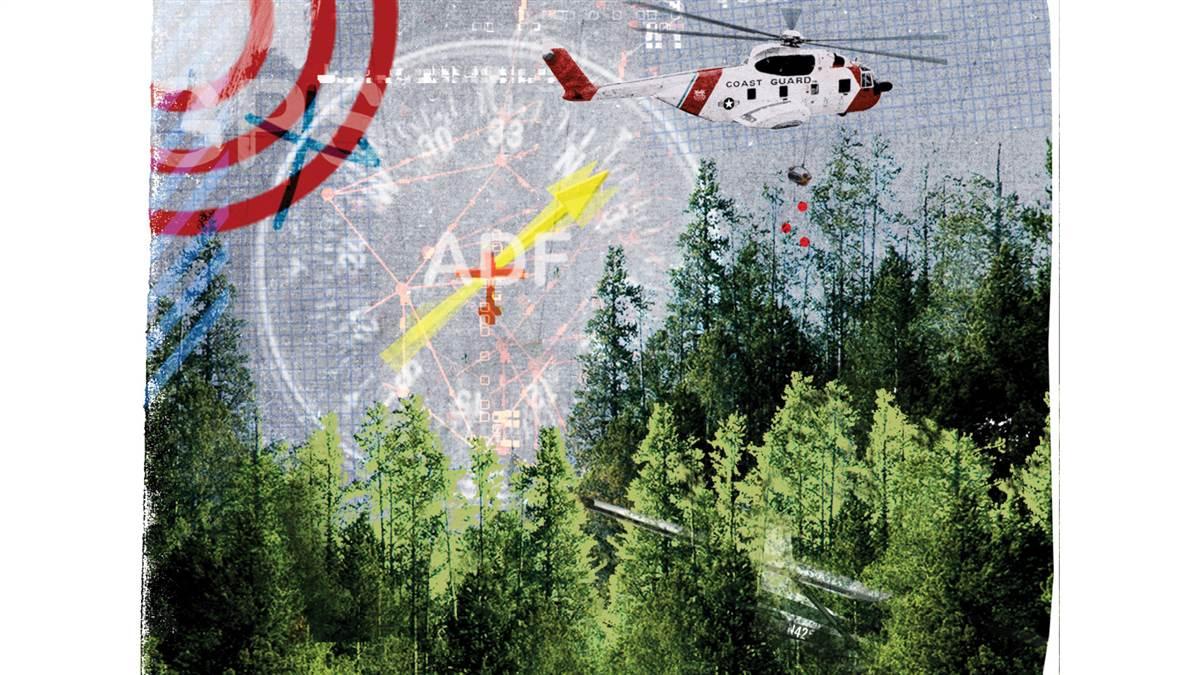 I was an aircrew member aboard U.S. Coast Guard aircraft in southeast Alaska. We flew Sikorsky HH–3F helicopters, which at that time were the only all-weather IFR-equipped helicopters in the state. Whenever an aircraft went missing, we got the call. In my experience, more than half of our searches came up empty, and then one day I learned why.

The big joke in southeast Alaska was that it only rains twice a week, once for four days, and then again for three. It was true. Southeast Alaska hosts the world’s northernmost rainforest, the Tongass National Forest. At the sound of the search and rescue alarm, I left the comfort of the barracks and ran through the wind and cold rain to operations, where our line crew was already pulling the HH–3F out of the hangar. The operations officer briefed us on our mission.

Only moments before, an Alaska Airlines 737 overhead had picked up an emergency locator transmitter signal. Almost simultaneously, a small Cessna was reported overdue in the small town of Wrangell, Alaska, about 75 miles north of us. We ran to the aircraft and started it up, taking off within minutes of the alarm for the 40-minute flight to Wrangell.

In my youth and inexperience, I remember thinking that this would be an easy search. After all, the aircraft had an ELT. Electronic locator transmitters had been required on all U.S.-registered aircraft since 1973, after a highly publicized and unsuccessful search for U.S. Rep. Hale Boggs whose aircraft had disappeared in Alaska. Originally just a beacon that searchers could home in on, the ELTs have become much more sophisticated, transmitting data on the aircraft via satellite. But back then, an ELT was just a screeching sound in your headset. In Coast Guard aircraft, we had an automatic director finder (ADF), which when tuned to 121.5 MHz would point to the source of the beacon. We could follow the needle to the site of the crash.

The Cessna was painted green and white. In a cold, steady rain, we were searching a four-square-mile hillside of tall timber, for a green aircraft in a rainforest.We arrived at Wrangell and flew just offshore. Immediately our ADF picked up the signal that we heard in our headsets. The needle pointed to a hillside just northeast of town. As we approached the hillside, the needle started swinging widely. When we flew offshore again, the needle settled down. We approached the hillside again, and again the needle swung erratically, pointing to no single position.

We realized then that the ELT and the ADF were of no further use to us. We had to start searching the old-fashioned way, by sight alone.

Our target was a Cessna 150. The pilot had just flown a hundred miles from Sitka, Alaska, landed at Wrangell, and then took off again without refueling for a quick sightseeing hop around town. He never made it back. The Cessna was painted green and white. In a cold, steady rain, we were searching a four-square-mile hillside of tall timber, for a green aircraft in a rainforest.

That’s when the reality dawned upon me that we were searching for an aircraft, perhaps with survivors, that lay within close proximity but was perfectly camouflaged. We moved slowly back and forth across the slope, in a track line search pattern designed to maximize our likelihood of seeing the target. Unlike a search over flat terrain, due to the thick timber and heavy undergrowth, we could not look out at an angle but could only look straight down, with the gray sky reflected off the many puddles in the muskeg below. We searched all afternoon. We landed at Wrangell, refueled, and took off again with a “Nightsun” searchlight mounted under the aircraft. We gave up near midnight, with plans to start again at first light.

The following day around noon, our other crewman Billy saw something. “Hold!” he said into his mic. Looking straight down, we could see a large white number silhouetted against the muskeg. We did not see an aircraft, just one large number. Billy hoisted me down through the thick branches, using all 200 feet of the cable on the drum.

I felt like I was like entering a forbidden place, like an ancient tomb. Despite the roar of the Sikorsky rotors overhead, I was struck by the quiet on the forest floor. The rainforest canopy kept out both light and sound. I could see where the aircraft had struck the treetops overhead, then scraped the bark off as it plunged down into the muskeg. The forest canopy had then closed back up. As I stood in the rain, I saw that, upon impact, the green fuselage had folded over onto the wing, so that only the green hull, with a few white numbers, was exposed to the sky.

There were four people on board the Cessna 150, with two small boys unbelted in the baggage compartment, if you can call it that. One of the four was still alive. It was my job to get him out.

Years later I cannot help but wonder if we could have seen that aircraft sooner if it had not blended so well with its environment; that is, in the northern rainforest of southeast Alaska with some of the thickest timber on the planet. What if it had been painted orange, or sunburst? Would more have survived? Did the others die while listening to us searching for them, only yards away?

Take a look at the aircraft at your airport. Are any of them painted to stand out against a background, whether sky or forest? Mine is red and white.

I think often of the victims of that flight. I think of the lesson that I learned and how I learned this one the hard way.