Bleed air is a beast. Leaving the engine’s compressor section at temperatures up to 1,000 degrees Fahrenheit and pressure 20 times that of ambient sea level air, it needs to be tamed by a jet’s air management system before it can be put to useful work in the environmental, pressurization, and ice protection systems of the aircraft. 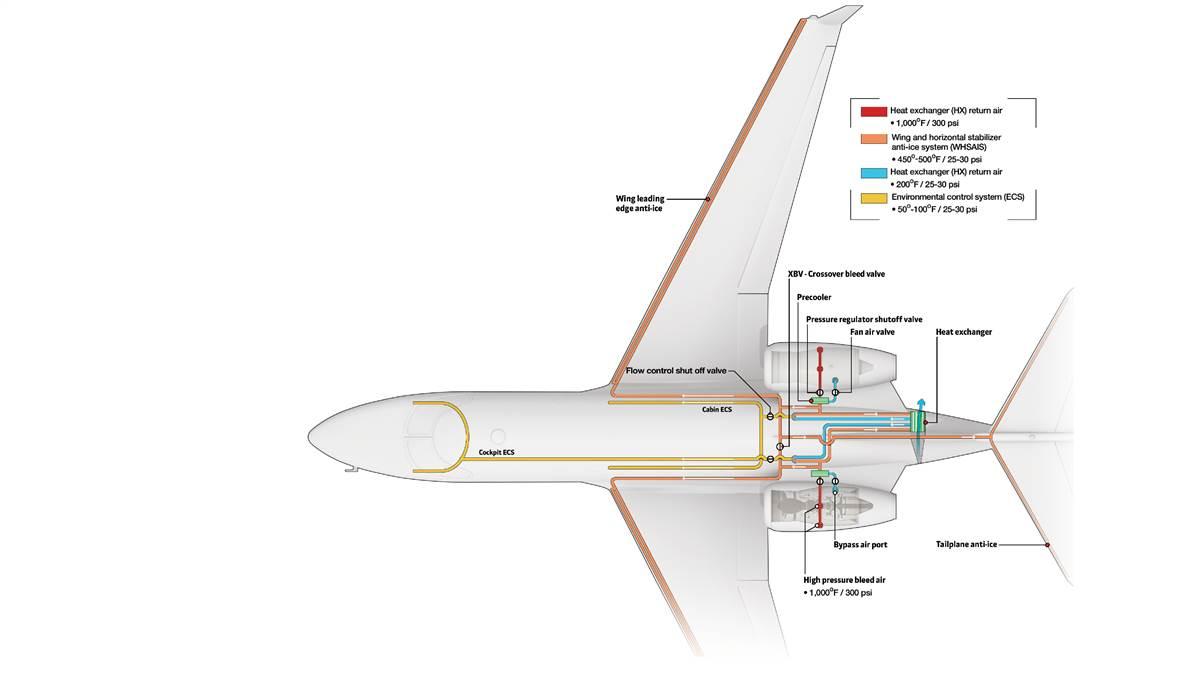 Further, it’s a mercurial beast to manage—subject to large fluctuations in temperature and pressure both as the atmospheric density changes during climb and descent, and as the pilot makes thrust changes varying from the absolute minimum to maximum output of the engine. The challenge of the air management system, then, is to take this too hot and too dense air of changing mass, and turn it into a consistent mass flow of desired temperature and pressure.

In a typical system the first component downstream of the bleed air source is the pressure regulating and shutoff valve (PRSOV). As the name implies, the PRSOV does two jobs for the price of one; primarily it regulates the pressure of bleed air with a high of perhaps 300 psi, in even a small engine, down to a manageable 25 to 30 psi. It can also, if needed, shut off the air supply from its engine entirely. This shutoff function can typically be initiated automatically in the event of a detected failure in the bleed system, or manually by the pilot through a cockpit control.

Recall that a fire needs three elements to burn: oxygen, heat, and fuel. Bleed air is an ideal fire starter, being a rich source of the first two elements. Present it with fuel—i.e., many of the contents of the aircraft not specifically designed to carry bleed air—and a fire is likely. Bleed leak detectors protect against this possibility by monitoring the temperature outside the bleed lines for the heat that would indicate the bleed air is escaping the ducting, and triggering a closure of the associated PRSOV.

Leaving the engine’s compressor section at temperatures up to 1,000 degrees Fahrenheit and pressure 20 times that of ambient sea level air, it needs to be tamed by a jet’s air management system before it can be put to useful work.After the PRSOV has brought the bleed air to a more useful pressure, something needs to be done about its temperature—far too high for most of the “client” systems in the aircraft to utilize. In the smallest jets using inflatable deice boots for surface icing protection, the air only needs to be cooled to the temperature appropriate for the environmental system—slightly higher than 200 degrees F. With the relatively low amount of compression being applied in the smaller engines of these very light jets, only one stage of cooling is needed to bring the bleed air to this desired temperature.

Larger models of light jets protect the wing and/or tail surfaces from ice with a thermal system that heats the entire leading edge with bleed air; hotter air (approximately 450 to 500 degrees F) than is used by the environmental system is needed to maintain desired surface temperature. Further, the greater thrust output of these engines requires more compression of ambient air, resulting in a greater volume and temperature of bleed air. Driven by these two facts, two stages of bleed air cooling are needed.

In these jets the bleed air leaving the PRSOV first passes through a precooler. The precooler works via the same mechanism as a heat-exchanger, but rather than ambient air being the source of heat removal, fan bypass air is utilized. Fan bypass air can be thought of as “bleed air lite”—air that has been slightly compressed and heated by the first stage compressor (known as the N1 fan), but for reasons of efficiency is sent out the back of the engine rather than being further compressed and burned in the combustion section. Some of this bypass air is diverted through a modulating valve into the precooler.

A computer controls the movement of the modulating valve as it attempts to maintain a constant temperature downstream of the precooler. As the valve is moved to a more open position more bypass air flows through the precooler, in turn causing more heat to be carried away from the bleed air. Closing the valve has the opposite effect of raising the output temperature. Depending on the aircraft a single target output temperature may always be used, or the target temperatures may vary with altitude, ice system operation status, and whether the aircraft is functioning with both bleed air sources operational. Downstream of the precooler this hot-but-not-as-hot air is split, with some going to the ice-protection system, and the rest flowing through a second ambient air-cooled heat exchanger to further cool the bleed air for use in the environmental system.

Modern pressurization systems provide an extremely smooth experience from takeoff to landing without any of the pressure “bumps” that can plague older jets. They do so thanks to the air system’s ability to provide a stable mass of airflow into the cabin throughout the changes in bleed air production associated with altitude and thrust changes. Whether at sea level and takeoff thrust, or at idle power at Flight Level 450, flow control valves (FCVs) turn a variable mass of bleed air into a constant mass output. Typically set to ensure between 8 and 10 pounds per minute of air enter the cabin, the FCVs let the pressurization system operate with constant inflow throughout the entire flight envelope, resulting in a smoother experience for occupants. Should an engine or bleed source fail, the FCV on the remaining side will automatically double its output, allowing for uninterrupted pressurization.

In some aircraft the FCVs are tasked with the same double duty asked of PRSOVs, and are thus called flow control shutoff valves (FCSOVs). Here the shutoff function is invoked to assist in environmental control.

Recall that on the ground we don’t have a large volume of ambient air available to cool the bleed air, and that even in the best of cases the bleed air can only be cooled to 30 degrees warmer than ambient conditions. Taxiing for takeoff on a 90-degree F summer afternoon then, the bleed air entering the cabin will be a toasty 120 degrees, not helpful to the vapor cycle system (functioning like the AC system in your car) that is trying hard to cool the cabin down. In these situations, the FCSOVs will close until the aircraft becomes airborne, helping cool the cabin faster. Conversely, on a very cold day the FCSOVs will go to their highest flow setting during taxi, to allow the most rapid possible heating of the cabin.