Get the app Get the app
Already a member? Please login below for an enhanced experience. Not a member? Join today
News & Media Aircraft manufacturers with facilities in Ukraine under threat

Aircraft manufacturers with facilities in Ukraine under threat

Editor's note: This story was updated March 2 and March 3 to include additional information.

Flight Design and Aeroprakt officials said their manufacturing facilities in Ukraine were continuing to make aircraft, but their production is in peril.

“We know them very well,” Peghiny said. “Some have been with the company more than 20 years. We’re good friends, and we take this very personally.”

The Flight Design factory is located in Kherson, a city of 300,000 people in the southeastern portion of Ukraine, where Russian troops took control after overcoming days of resistance in a spirited defense by Ukrainian defenders. Russian tanks patrolled the streets on March 2, Reuters reported, though Kherson remained the only city under Russian control. It was unclear whether and for how long the Flight Design factory would remain in operation. Workers had continued building airplanes as the Russian military encircled the city.

Flight Design USA has about 25 airplanes on order.

“At this point, there are about 10 to 12 airframes at the Kherson plant,” Peghiny said. Ordinarily, the airframes would be sent to Flight Design’s final assembly and completion center in the city of Šumperk in the Czech Republic.

“We’ve found a new, 25,000-square-foot site suitable for use as a production and paint shop, and will use that in the future,” Peghiny said. Šumperk is also home to the F2 and CT series’ completion center, and is a European Union Aviation Safety Agency certified and approved production organization. Load, structural, and flight testing is also conducted in Šumperk. Additional engineering work is done at the company headquarters in Eisenach, Germany.

Flight Design is offering to move its Ukraine staff and their families to the Šumperk facility. Peghiny said that the Kherson plant will function as long as conditions allow. However, tooling currently remaining in Kherson will have to be replaced by newly manufactured tooling for use in Šumperk. The company will fund new tooling, but it may take six to nine months to build.

“This is so sad,” Peghiny said. “We were all geared up and really rolling until the invasion.” Even so, Flight Design said it would have its usual presence at the upcoming Sun ’n Fun Aerospace Expo in Florida and Aero Friedrichshafen event in Germany.

“We’re hoping for the best and preparing for the worst,” Peghiny said.

Dennis Long, a dealer for Aeroprakt, a manufacturer of light sport aircraft in Ukraine, said he spoke with factory officials who said they plan to remain on the job.

“They told me they’re going to keep making airplanes until they can’t,” he said. “For the time being, it’s business as usual, although my next two airplanes will likely have to be shipped from Poland because the port of Odessa is closed.”

Long is based in Searcy, Arkansas, and sells about a dozen two-seat Aeroprakt A22s and A23s a year. Business has been extremely good recently and he’s currently sold out through the end of 2022.

“Sales have been great,” he said. “Right now, due to all the uncertainty, I’m not taking any new deposits. I’m more concerned about the people over there than the airplanes at this moment.”

Epic Aircraft, maker of a single-engine turboprop in Bend, Oregon, is controlled by a holding company owned by Vladislav Filev, a Russian oligarch with multiple aerospace firms known as the “Russian Elon Musk.” Filev owns S7 Airlines, Russia's largest private passenger carrier, and S7 Technics, a major aircraft maintenance firm. Filev is a graduate of the former Soviet Union's military space academy in St. Petersburg and later became chairman of a Russian investment firm. Epic Aircraft received an FAA type certificate and production approval for its carbon fiber E1000 GX, which cruises up to 333 KTAS and has a ceiling of 34,000 feet.

The Bend Bulletin reported February 22 that Epic has ramped up production following a slowdown forced by the coronavirus pandemic, and expects to complete 20 aircraft this year, doubling that production rate to 40 aircraft in 2023.

Epic Aircraft Director of Sales and Marketing Mike Schrader said in an email exchange that the situation in Ukraine was not expected to impact the company. 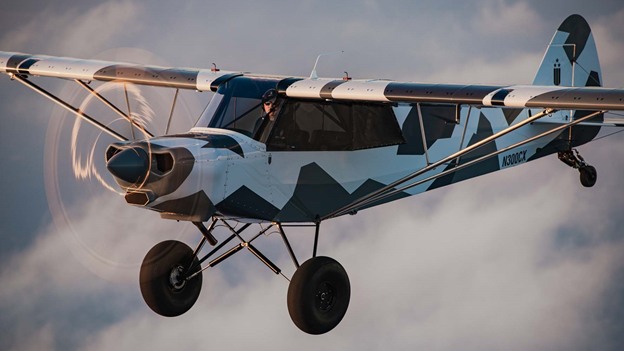 New Cub on the block