‘Those that have’ include jet pilots

On December 1, 2021, a Cessna Citation Mustang was reported to have made a gear-up landing at Lake Havasu City Airport (HII) in Arizona. 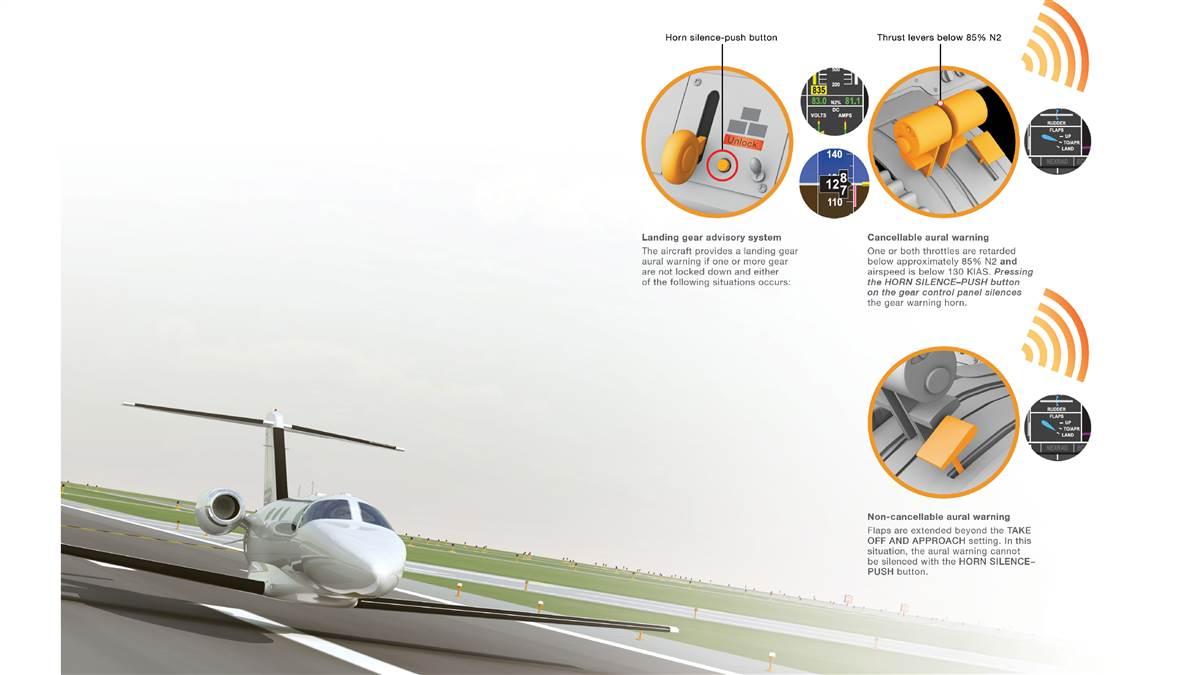 Photographs taken of the accident show the aircraft resting on the ground with the flaps in the Up position, with extensive fire damage to the right wing. The mishap is strikingly similar to another Mustang accident that occurred just the year prior.

In February 2020, a pilot was receiving a checkride from a designated pilot examiner and was in the process of demonstrating a zero-flap landing, a required maneuver for the test. The pilot believed he had completed the prelanding checklist and put the gear down; however, the aircraft touched down with gear retracted, resulting in a dramatic fire caught on video by a bystander’s cellphone.

While any aircraft with retractable landing gear is vulnerable to a gear-up landing, the specific design of the gear warning system means some aircraft lend themselves more to the right mix of human factor threats that can lead to another pilot joining the ranks of “those that have.” That’s why it’s important to develop an awareness of the relative robustness of your aircraft’s gear warning system. It’s critical to developing procedures that work to minimize this most undesirable outcome.

Let’s start by examining the gear warning system found on the two accident aircraft. The Mustang has the same system found on many other models of Citations, taking inputs from thrust lever position, airspeed, and flap setting. If the flaps are not the landing setting (which causes a non-cancelable gear warning regardless of other parameters if all three gear are not locked down), the aural warning will be triggered if airspeed is below 130 KIAS and thrust levers are below approximately 85 percent N2. This thrust setting is very high, roughly equivalent to the climb thrust detent.

The requirement that both conditions be met helps to prevent nuisance or distracting erroneous warnings. After liftoff, for example, the aircraft will have high thrust settings, but will be below 130 KIAS for several seconds while it accelerates. Conversely, there are many times at high speed where the pilot will need the thrust levers at idle, but relatively few occasions where the pilot will deliberately wish to fly below 130 KIAS while also not being at climb power.

A latent threat arises though, in that “relatively few occasions” is not the same as no occasions. Every time a Mustang pilot performs the series of stalls required during initial and recurrent training, two of the three stalls involve gear-up, low-speed flight, with the thrust at a low setting—triggering the landing gear warning. So, whether performing the stalls in a simulator or in-aircraft, each time the pilot is being conditioned to routinely ignore and cancel a landing gear aural warning.

Critically, once the aural warning is canceled, it will not recur unless the aircraft speeds up beyond 130 KIAS, and then slows again below 130. Thus, the trap is laid: A pilot performing a flaps-up landing, as occurred in the two events under discussion, hears a landing gear aural warning when slowing in the pattern below 130 KIAS. Not ready to lower the gear yet, the pilot, perhaps without deliberate thought, silences the strident gear horn, as they have done many times before during training. For the rest of the pattern no further gear warning is created, and the extra workload created by the zero-flap landing results in the pilot’s omission of the prelanding checklist, which would prompt them to extend the gear.

Contrast this gear warning system with that found in Embraer’s Phenom 100. In addition to thrust lever position and airspeed, the Phenom adds one more critical input to the calculation of when to issue a gear warning altitude. For a zero- or reduced-flap landing, the aural warning will only be triggered when the aircraft is at or below 700 feet above field level. Larger jets use radar altimetry as an input to the gear warning system, but the Phenom creatively works around the absence of a radar altimeter by comparing barometric altitude to the landing field elevation set in the pressurization system.

Inclusion of this extra parameter has two important effects. First, as stalls are practiced at altitude, most Phenom pilots will never touch their gear warning silence button, thus not developing the habit pattern that doing so is normal and necessary. Second, when practicing a zero-flap landing, should the pilot forget to lower the landing gear, the warning will not sound until 700 feet above field level. By this point the pilot is likely on base or final leg, and absolutely and unquestionably wants the gear down, whereas at a pattern altitude of 1,500 feet above field level the pilot may not quite be ready for the gear when a warning is triggered. Again, the result is that the pilot is much less likely to cancel their sole and final gear warning.

In flying an airplane where we have been conditioned to cancel gear warnings, we are at elevated risk of conducting a gear-up landing, particularly during an abnormal flap landing. Good procedure and checklist discipline is of the utmost importance. During any approach or landing I teach my students to never cancel a gear warning, no matter how irritating. If, while conducting a partial or no-flap landing, the gear warning horn is triggered I give my students two choices—accelerate above 130 KIAS and hold the speed there until ready to lower the gear, or just put the gear down, even if it’s earlier in the pattern than otherwise desired. Pressing the silence button is strictly forbidden outside of stall practice.

Next are the techniques that should be used for all landings, not just abnormal flap landings. First, lowering the gear at the same place during every approach will help put habit patterns in our corner. On an instrument approach, a specific glideslope displacement, such as one dot prior to intercept, works well as a consistent trigger for lowering the gear. For a visual pattern, midfield on downwind—or abeam the touchdown point—is appropriate.

Recognizing that some approaches and patterns become nonstandard (e.g., a visual approach that starts on a base leg will never pass the midfield/threshold trigger), another final check is necessary. On short final, roughly a half-mile from the threshold, I verbally reconfirm “three green, flaps (as appropriate), cleared to land”—the three coincident items history has shown, despite the best intentions of otherwise diligent pilots, Murphy always finds ways to ruin your day.