A five-month plan to circumnavigate both poles stretched into nine months before Robert DeLaurentis successfully guided his modified 1983 Twin Commander 690D to a landing at San Diego’s Gillespie Field on August 12, 2020, after flying through 22 countries and six continents.

Among the pilot’s primary goals was to celebrate the “similarities in people, not the differences,” and to promote better understanding worldwide. Since completing the flight, DeLaurentis is using the airplane as a vehicle to share his experience by promoting science, technology, engineering, and math education and relaying how “aviators doing good things” can promote aviation.

The self-described “Zen Pilot” began his journey in his aircraft, which he named Citizen of the World, on November 16, 2019, before the COVID-19 virus closed borders worldwide and added layers of challenges to the ambitious adventure. DeLaurentis observed how coronavirus pandemic lockdowns and isolationism “seemed to split the world apart with great intensity.” However, he said he was “so dedicated to the mission that there was no way I was going to walk away from it.” His vision of connecting the South and North poles “and everybody in between” took on a new meaning as an “empowering example of connection, collaboration, and possibility” as the world came to grips with life’s new reality.

During a planned stop in Spain for several weeks, the country was overrun by the virus. Accustomed to providing aviation tips on the AOPA blog, DeLaurentis found himself sharing safety tips for grocery shopping and daily routines that he gleaned in Europe during the earliest days of the pandemic. 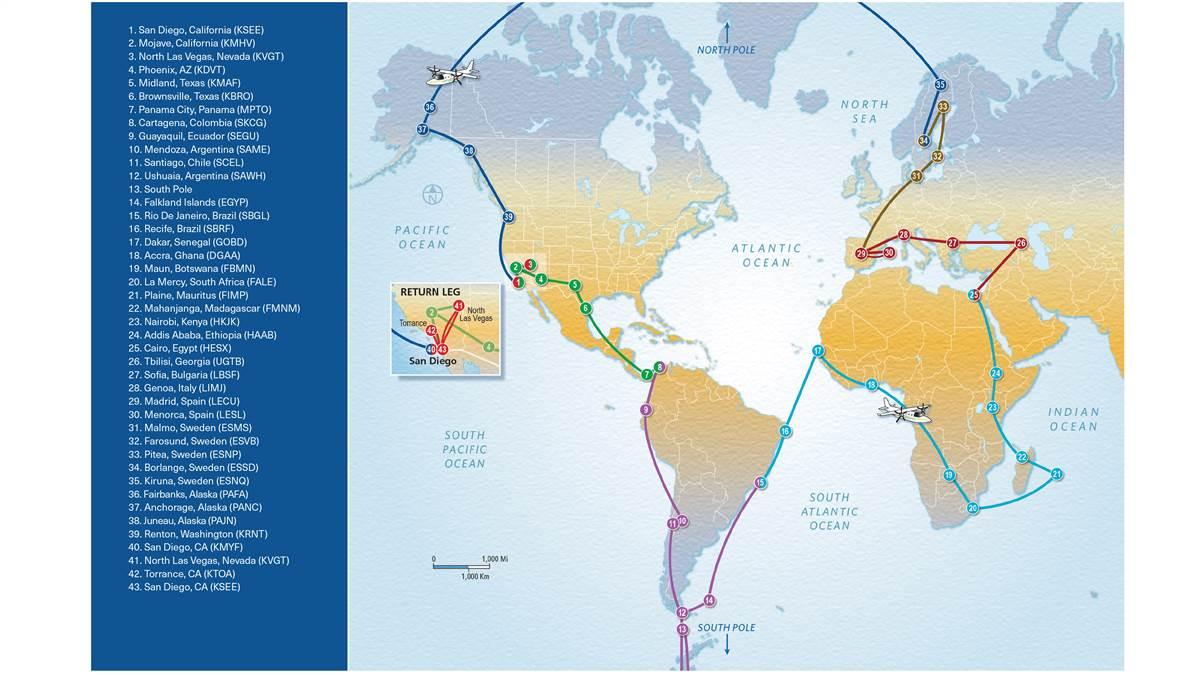 Above the South Pole in December 2019, DeLaurentis faced a navigation challenge when most of his on-board flight management and navigation systems became unreliable—and he experienced the same phenomenon again over the North Pole in July 2020.

By the time he landed in California with a celebratory warbird escort, DeLaurentis had notched several firsts during the polar circumnavigation: using biofuels over the South Pole; tracking over the pole with ADS-B equipment; and setting time and distance marks for a Twin Commander. He carried a NASA wafer scale spacecraft prototype for interstellar probes, sampled the polar atmosphere for plastic fibers that travel through the air, and provided science, technology, engineering, and math (STEM) outreach to those he interacted with along the way.

AOPA was represented during the association’s eightieth anniversary year during the flight over the South Pole in December 2019. A black-on-white AOPA wings and shield logo survived speeds of 360 miles per hour and temperatures of minus-60 degrees Celsius that caused fuel gelling concerns at 35,000 feet. DeLaurentis described the roundtrip flight from the tip of South America to Antarctica that included navigation loss, extreme weather, and pilot fatigue as “very challenging.”

Modifications to the Twin Commander began a year prior to the flight, with more than 50 upgrades to the aircraft, avionics, and turbine powerplants. “You could probably write a book on the airplane itself” with all the modifications, he said. Even the tire plies were increased to support the extra weight generated from fuel carried in six aluminum ferry tanks—five in the aircraft’s pressurized cabin and one in the unpressurized luggage compartment, which potentially doubled the aircraft’s range to 5,000 nm and a flight time of 24 hours.

However, managing the fuel system’s array of valves and transfer pumps proved to be more challenging than expected. A misalignment of a fuel tank vent valve caused two of the metal tanks to rupture at different times and “dumped over 150 gallons of Jet A fuel inside the airplane” while dousing DeLaurentis with fuel.

“I did everything I could think of to make that airplane go higher, faster, and further. The biggest thing was the step up to Honeywell’s TPE331-10T engines.” The geared-drive engines produce 1,000 thermodynamic horsepower and put out 940 shaft horsepower, but after modifications produced 1,147 shp and were “remarkably efficient compared to the free-turbine designs like the Pratt & Whitney PT6 series,” he said.

This efficiency was crucial when he departed for the South Pole from Ushuaia, Argentina, during an 18-hour-leg that tested his—and the aircraft’s—endurance. It also came into play in an area he called “the zone of confusion” near the North Pole where on-board navigation instruments were unreliable for hundreds of miles, and hours of flight time.

Below DeLaurentis lay a barren landscape of ice and crevasses so deep and wide they could swallow the 43-foot-long airplane and its 52-foot-long wingspan without a trace. Polar bears would be a factor if he managed an emergency landing on the ice without disappearing beneath it.

“I’m five hours of flight time from land, 30,000 feet up over a cloud layer at a wrong-way altitude doing almost 400 mph over the North Pole with no coms,” he recalled. The flight management system would periodically come online, then fall offline a short time later. The magnetic compass, flight management system, and other avionics became confused as DeLaurentis flew directly over the magnetic, the true, and the North Pole of inaccessibility—a remote portion of the North Atlantic equidistant from land masses. He said interpreting the conflicting position readings “felt like cosmic torture.”

DeLaurentis instead relied on “a simple $1,000 iPad” to show him the way. An old-school directional gyro and a watch also helped him stay on track. “I was going back to fundamentals because that’s what we must do when nothing makes sense.”

He made a point to fly across the South Pole twice—and the North Pole three times—to make certain he accomplished the polar circumnavigation goals.

DeLaurentis logged 26,000 miles during the polar journey and wrote blog posts documenting the highs and lows. Landing permissions and takeoff protocols constantly changed amid COVID-19 restrictions. Bureaucratic mix-ups threatened to derail a polar crossing and delayed other crucial legs. Mechanical challenges included a burst ferry tank in the Twin Commander’s cabin that flooded the aircraft’s interior with fuel and drenched the pilot.

Despite the challenges of completing a world journey during a global pandemic, DeLaurentis managed to look on the bright side. He met monks who preached patience and youth who taught him about appreciating life’s simpler joys, and he fell into a “deeply reflective state of mind” that allowed him to feel more connected to others. He described it as a “stunningly beautiful experience.”

He said his view of different cultures changed when he saw people cooperating rather than competing. “All the people along the way who helped me, even when it wasn’t necessarily to their initial benefit, helped me see that when we work together, we can accomplish so much more. I came to understand that working together as citizens of the world would be the only way ahead for the planet as we tackle things that we never would have expected.”

After completing the polar circumnavigation, DeLaurentis ushered in several projects highlighting the Earth-crossing flight. He is sharing more than 50 interviews with people he met along the way. After the trip, the aircraft was refurbished with a new interior and new paint so DeLaurentis can travel to schools and make youth aware of STEM education classes. He is also collaborating with Redbird Flight Simulations on five simulated “high-stress flights” that test pilots’ mettle during flyovers of the North and South poles and a cyclone out of Madagascar. During the simulated flights, participants can observe “the most harrowing moments” of the journey.

During the summer of 2021, DeLaurentis was joined at 2021 EAA AirVenture by Voyager nonstop, around-the-world pilot Dick Rutan. The pair arrived in the distinctive Citizen of the World Twin Commander and drew a crowd before they could unload luggage.

In the months since, DeLaurentis relocated to the Pacific Northwest and earned a seaplane rating and a tailwheel signoff. His future includes traveling Washington’s Puget Sound in an amphibious Cessna 182, logging more tailwheel time, and exploring Alaska. He was recently nominated by Dick and Burt Rutan as a Living Legend of Aviation. “To be considered for membership by this group of legendary people that are doing so much for aviation and the world is for me, beyond words,” he said. “It is my hope that our message of connection, oneness, and peace which has reached 53 countries on six continents over the past eight years will continue to spread and have even more impact on the entire planet.”