The Sunshine State delivered in spades for pilots attending The Hangout, an AOPA Fly-In at Tampa Executive Airport in Florida. Warm fall weather and bright blue skies welcomed more than 1,200 AOPA members and aviation enthusiasts on November 4 and 5.

"It's always a pleasure to host AOPA," said John Tiliacos, the executive vice president of airport operations and customer service for Hillsborough County Aviation Authority. The authority operates Tampa International Airport and the general aviation airports of Tampa Executive, Plant City Airport, and Peter O. Knight Airport. "We have a strong relationship with AOPA, a relationship we highly value."

The Hangout featured a wide variety of activities, including short-takeoff-and-landing demos each day; industry and safety seminars; nearly 50 exhibitors; and aviation movies each night; including Top Gun: Maverick and Speed & Angels, all included as part of the admission fee. The event also included an expansive 39 Lounge, which provided plenty of seating and shelter for pilots to hang out and socialize throughout the day and evening. Food trucks, a bar, fire pits, and a live band helped create a welcoming environment.

The exhibit area included festival-style small tents for exhibits, including engine and avionics manufacturers, flying clubs and flight schools, and a host of aviation service providers. The static display included aircraft from Cirrus, Evektor, Vashon, Icon, and Daher, among others, plus a variety of airplanes from Premier Aircraft Sales and Van Bortel Aircraft.

The Hangout, a new event format for AOPA, was the second and final of the year. The first was in Spokane, Washington, in September. "Our goal was to provide a relaxed and welcoming event where pilots can learn new safety techniques, examine new products, and simply hang out with one another," said Elizabeth O'Connell, AOPA's director of events. "An important element was to incorporate aircraft camping into the event," she continued. "We wanted camping to be close to show center and convenient for those who want to pitch a tent under a wing." Pilots camped with 64 airplanes in Tampa. In all, 170 aircraft flew into the event. 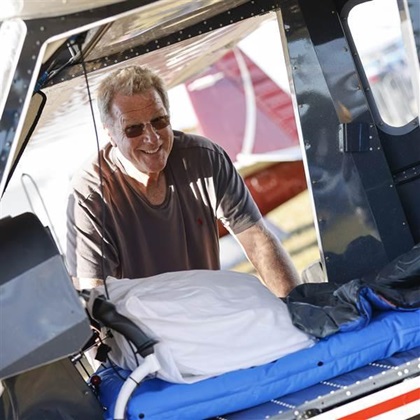 Sarasota pilot John Cropsey enjoyed his overnights at the event, stretching out in his new Vashon Ranger R7, a light sport airplane, built in Washington. Cropsey took delivery of the perky two-seater in August and has flown it almost every day since, already putting 70 hours on it. "It has exceeded my expectations," he said. Even at 6 feet, 4 inches he can stretch out in the rugged airplane where seats fold down and the seat cushions can be removed and replaced with a foam pad and a sleeping bag. Elsewhere in the campground, pilots pulled out portable grills, chairs, picnic tables, and tents, setting up their own community next to the 39 Lounge.

AOPA's last scheduled event for the year is the Aviator Showcase at Fort Worth Alliance Airport in Texas. The event runs 4 to 7 p.m. November 17 and 9 a.m. to 3 p.m. Central time November 18. The showcase features new aircraft displays and exhibitors focused on products to upgrade and improve aircraft. A single seminar track is focused on content related to buying and upgrading an aircraft.

Contributor (former Editor in Chief)
Contributor and former AOPA Editor in Chief Tom Haines joined AOPA in 1988. He owns and flies a Beechcraft A36 Bonanza. Since soloing at 16 and earning a private pilot certificate at 17, he has flown more than 100 models of general aviation airplanes.
Go to Thomas B Haines's Profile
Topics: AOPA Events, Fly-in, U.S. Travel