Anatomy of a slip

Know how to use this essential pilot tool

A slip is a favorite technique that finely tunes my descent profile in the pattern, especially since I routinely fly steep approaches. 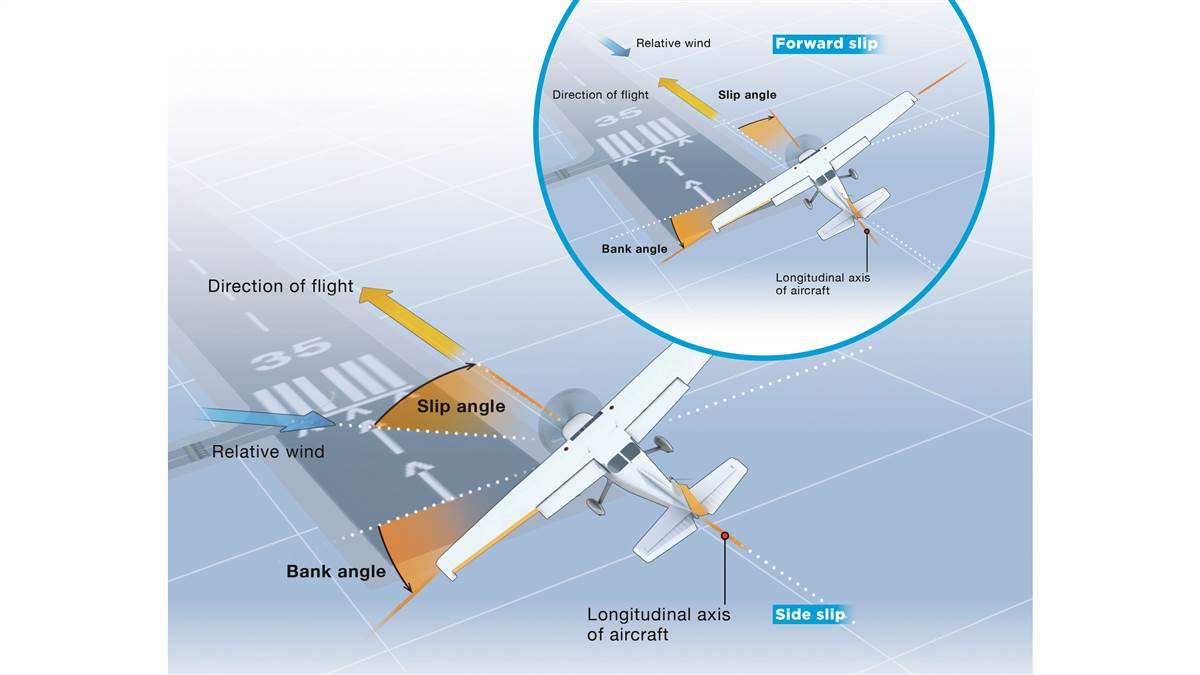 Doing so ensures that on the final approach segment, I can clear the trees near the beginning of the runway at Franklin County Airport (UOS) near Sewanee, Tennessee, while still touching down just past the numbers. That technique served me especially well several years ago when the engine of a Piper Saratoga left me in the lurch as I turned base to final on Runway 24. With an abundance of altitude, I assumed best glide airspeed and, once landing on the runway was assured, a forward slip allowed me to make efficient use of the short runway.

The private and commercial airman certification standards include the slip as a required maneuver, but during practical exams, it often becomes clear that the topic isn’t getting enough attention. The associated aerodynamics can elude even experienced flight instructors who perpetuate misconceptions with their students. Let’s dissect slipping flight and see that, used with care, it’s an important component in our aviation toolbox.

As we fly, the angle between the relative wind and the longitudinal axis of the aircraft is called the slip angle. We generally strive for coordinated flight—a zero slip angle—because a lack of coordination introduces significant drag that lowers cruise speed and efficiency.

An airplane naturally changes the direction of the oncoming flow in myriad ways. After all, it generates lift by deflecting the air downward in its wake. An engine with a spinning propeller adds a corkscrewing effect to the flow around the fuselage that hits the left side of the vertical fin and encourages the aircraft to slip to the left. This effect, as well as the other left-turning tendencies, can be especially pronounced during takeoff, so we use right rudder to compensate.

Some of the left-turning effects are still present in cruise flight. But by using various techniques such as canting the engine axis to the side and setting a higher angle of incidence for the left wing slightly higher than that of the right, we can keep the rudder pedals neutral in cruise flight while enjoying the efficiency that coordination affords. The truth is that we almost always fly with a nonzero slip angle because coordination is a razor-thin line between slipping in either direction.

The best way to assess coordination is to visualize the motion of the air with respect to the longitudinal axis. Glider pilots use a slip string—a piece of string with one end taped to the center of the windscreen. If the string falls straight back along the middle of the windscreen, the slip angle is zero, but if the end moves to the right or left, then applying opposite rudder can return the slip angle to zero.

Multiengine instructors use a slip string during training with one engine inoperative. If the left engine fails in a typical twin-engine aircraft, the aircraft will tend to roll and slip to the left. The pilot might naturally maintain wings-level flight and use right rudder pressure to keep the airplane flying straight, but the slip string betrays the inefficiency of this configuration. Banking slightly into the running engine and releasing some of the rudder pressure produces the efficiency of coordinated flight and increases opportunities for an emergency landing site.

The reason you don’t see slip strings on single-engine aircraft is that a running or even windmilling engine disturbs the flow and renders the string unreliable. Interestingly, the twin-engine example shows that coordinated flight can happen when the inclinometer ball is not centered. So the ball isn’t a perfect indicator of coordination, but it’s typically the best proxy available.

Banking an airplane can also compromise coordination. For the remainder of this discussion, suppose a pilot commences a turn by rotating the yoke to the left knowing that the same principles will apply for a right turn. The downward-deflected right aileron creates more drag than the upward left aileron, so the pilot should also apply left rudder for coordinated flight and symmetric flow across the wings. Once she holds the aileron deflection for a bank angle constant, the necessary rudder pressure will keep the inclinometer ball centered. The wrong amount of rudder pressure—either too much or too little—results in a nonzero slip angle because the air doesn’t flow evenly across the wings.

Now let’s focus on uncoordinated flight while the aircraft is banked. If the pilot holds too much rudder than is necessary for coordination, it produces a form of slipping flight called a skid. The aircraft’s occupants feel as though they are being pushed to the outside of the turn—the same way we feel when making a tight turn while driving a car. What feels natural in a car should never feel so in an airplane. In such a skid the inside wing has a higher angle of attack, and if a stall occurs in this condition, the low wing stalls first and the airplane tends to roll into a spin.

Using too little left rudder in this left turn, or even applying right rudder, means that the yaw rate is insufficient for the bank angle. This type of slipping flight is called a (proper) slip and the sensation for passengers is that of being pulled to the inside of the turn. In a slip, the outside (right) wing has a higher angle of attack. If the aircraft stalls in this condition, the high wing will tend to stall first, and a roll often commences to the right. The aircraft can also enter a spin if stalled in a slip, but we’ll see that this is a better situation than a skidding stall.

Let’s say now that the pilot puts the airplane into a 30-degree bank and uses enough opposite rudder to stop the turn so that the aircraft moves along a straight line over the ground. We use this type of slip all the time in the pattern. In a forward slip, the high drag configuration allows us to lose excessive altitude while maintaining a responsible airspeed. In a side slip, we compensate for a crosswind to keep the longitudinal axis of the airplane aligned with the runway centerline and use extra power to compensate for the increased sink rate. Aerodynamically, the forward slip and the side slip are the same maneuver.

Given that it’s possible to spin from both a skidding turn and a slipping turn, what makes the former dangerous and the latter a valuable tool? First, a slip allows us to keep the aircraft moving along a straight line which can be important during the final segment of the approach. The second refers to stall characteristics. If the aircraft stalls in a 30-degree skidding turn and the pilot takes 90 degrees of the attendant roll to recover, the aircraft is now inverted and guaranteed to lose significant altitude in the recovery process. In the pattern, all the aerobatic prowess in the world won’t be enough to avoid tragedy.

In contrast, if the aircraft stalls in a 30-degree slipping turn and the pilot takes 90 degrees of roll to recover, the aircraft is now banked 60 degrees in the opposite direction but is still upright. To be clear, stalling in both a skidding and slipping turn can result in a spin. The chief benefit of a slip is that the pilot has more time to push forward on the yoke to stop the aircraft from going inverted.

Misconceptions about slips abound and are even perpetuated by well-meaning flight instructors. For example, some explain that spinning from a slip is impossible and that’s just not the case. I have a video demonstrating this on my YouTube channel. Some say that the control inputs one holds in a slip to a landing are “anti-spin,” but considering the left slip introduced above in which the pilot holds left aileron and right rudder, the high wing will have a higher angle of attack so it will tend to stall first. In that case, applying left rudder and forward yoke pressure would be part of the recovery for an attendant spin.

To be sure, the aerodynamics of uncoordinated flight isn’t easy. There is absolutely no sticky situation in general aviation for which a skid is the answer. But a slip, used with care, is an essential part of our aviation toolbox and deserves regular attention and practice.