Get the app Get the app
AOPA Members DO more LEARN more SAVE more - Get MORE out of being a pilot - CLICK HERE
News & Media eVTOL hopeful Kittyhawk done, dusted

Those casually following the eVTOL scene may not have noticed the Kittyhawk Heaviside, a single-seat, autonomous (pilotless, remote-controlled), winged eVTOL that traces its complicated origins back to 2010. 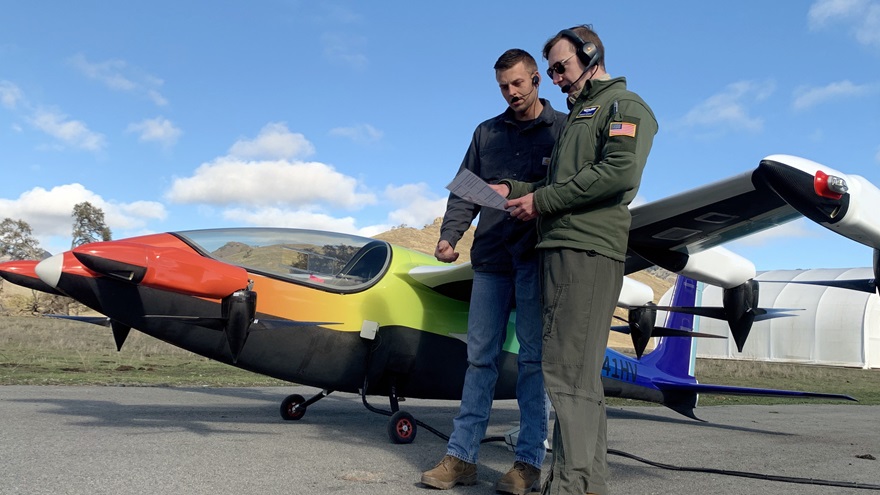 Parker Downey, of Kittyhawk, and Terrence McKenna, a U.S. Air Force Reserve pilot with the 370th Flight Test Squadron and the test and experimentation lead for the Air Force Agility Prime program, conduct preflight checks of a Heaviside aircraft in anticipation of its first flight by an Air Force pilot at the Kittyhawk Corp. facility in Palo Alto, California. The Agility Prime program took another step forward in December with the first government remotely piloted flight of an eVTOL aircraft. Nine months later, the fate of Kittyhawk's Heaviside eVTOL prototype was unclear after Larry Page announced in late September that the company was shutting down. Courtesy photo via U.S. Air Force.

That was when Google co-founder Larry Page funded Zee.Aero, which changed its name to Kittyhawk, then built the Flyer—a one-person, recreational ultralight design with eight tilt rotors the company said was meant for flying “above water.” The Flyer project seems to have petered out, replaced by the Cora, an autonomous, two-seat, 12-rotor, winged eVTOL—with an aft pusher propeller for forward flight—intended for use as an air taxi. The Cora’s top speed was advertised as 100 mph, its maximum range as 25 statute miles, and its operating altitude as running between 500 and 3,000 feet.

Palo Alto, California-based Kittyhawk upped its standing after forming a joint venture with Boeing Co. in early 2019 to form yet another company, called Wisk, which took over the Cora project. In March 2021 Boeing merged its own, pre-existing eVTOL company—Aurora Flight Sciences—with Wisk.

Got all that? Well, things have taken a sudden, drastic turn: Page stated that he is shutting down Kittyhawk altogether. “We’ve made the decision to wind down Kittyhawk,” the company said on Twitter. “We’re still working on the details of what’s next.”

This implies the end of the Heaviside project, although Boeing has said that this development hasn’t changed its commitment to Wisk.

Obviously, the death of Kittyhawk will be scrutinized in the weeks and months to come. Will another company pick up the Heaviside project? This single-seat, winged tiltrotor, which has six tilting propellers on the aft edges of its main wing, with two more on the forward canard, seems able to fill a niche. Like the Cora, the Heaviside is autonomously controlled, but by describing it as “optionally piloted,” Kittyhawk appeared to leave open a role for direct, on-board pilot control.

Most interesting is that the Heaviside had attracted interest from the U.S. Air Force’s Agility Prime program, an initiative aimed at developing a stealthy special operations aircraft quieter and smaller than traditional helicopters. It has reportedly been awarded airworthiness approval by the Air Force, which flight-tested a Heaviside H2 version of the original model, along with several other eVTOLs that are vying for an Agility Prime contract.

But perhaps the greatest significance of Kittyhawk’s decision is that it may well signal the beginnings of a shakeout in the eVTOL world, one that seems overdue in a business segment filled with competitors, propelled by no small amount of hype, and—with a few exceptions—design compromises that make their utility questionable. Overconfidence also seems to play a part.

As of September 22, Kittyhawk’s homepage still featured a boast, “If anyone can do this, we can.” There was no mention on the page of the fact that the company was “winding down.”

AOPA Pilot Editor at Large
AOPA Pilot Editor at Large Tom Horne has worked at AOPA since the early 1980s. He began flying in 1975 and has an airline transport pilot and flight instructor certificates. He’s flown everything from ultralights to Gulfstreams and ferried numerous piston airplanes across the Atlantic.
Go to Thomas A. Horne's Profile
Topics: Electric, Advanced Air Mobility