I’m frequently asked by aircraft owners to recommend good maintenance shops in a particular area, and my company maintains a large database of maintenance resources to facilitate such referrals. 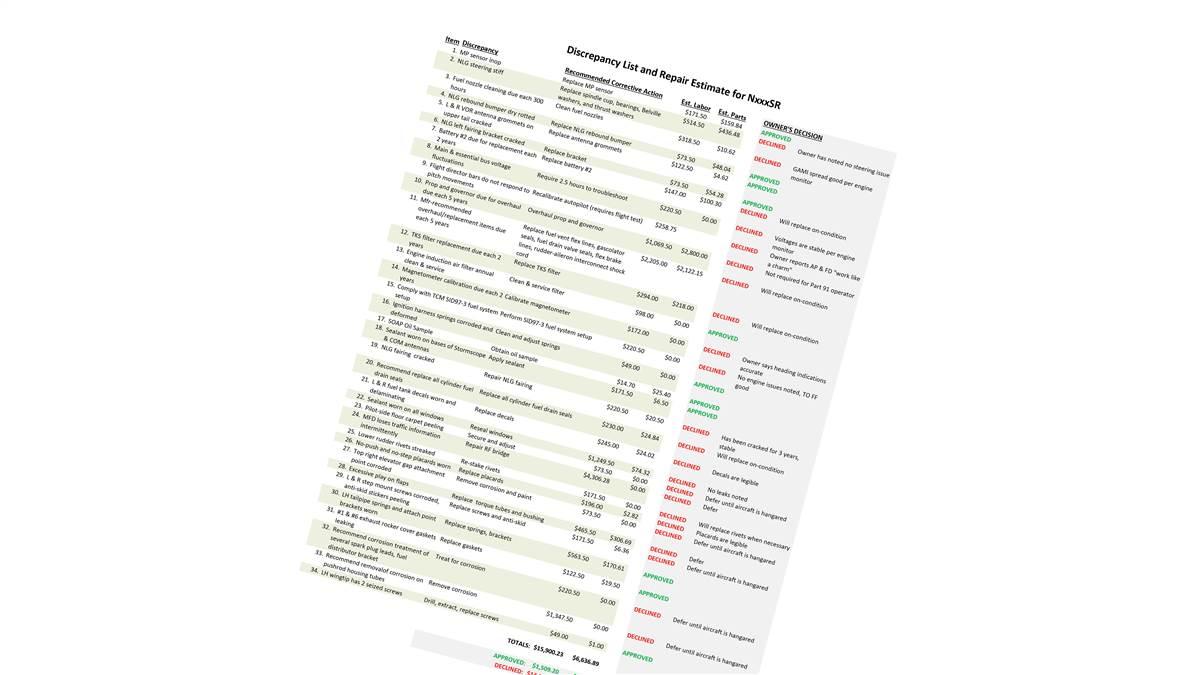 Our team of more than 20 A&P/IA account managers keep close track of their experiences working with hundreds of shops, and we do our best to steer our clients to the ones with which we’ve had the best outcomes and—perhaps more important—away from those that were not so good.

Often, I find myself telling a client, “This is an outstanding shop that does thorough inspections and excellent work, but be prepared for a big bill unless you keep them on a short leash.” I do not mean this as a criticism of the shop. It simply reflects the reality that the best shops tend to do very thorough inspections and uncompromisingly meticulous repairs, and they tend to have a perfectionist approach to maintenance. These are exactly the attributes we want the shop to have, but the result can be serious sticker shock unless the owner actively throttles the shop back by explicitly directing them to perform only the work desired and nothing more.

Consider the annual inspection we managed for the owner of a 2006 Cirrus SR22. The shop involved was a Cirrus Authorized Service Center we’d worked with before and liked a lot. Per our normal practice, we instructed the shop to do the inspection but to perform no repairs and to order no parts until it had written up a detailed discrepancy list, repair recommendations, and cost estimates and provided it to us to review with the owner.

Why are we doing this?

We went over the shop’s discrepancy list and repair estimates with the owner line by line, offering him suggestions as to the items that really ought to be repaired and those that could be prudently declined or deferred. Generally, we encouraged the owner to approve those items that clearly needed to be done and/or that were inexpensive to do, and to decline or defer work that was not demonstrably necessary (particularly if it was costly).

It’s your shop’s job to find and document every discrepancy it can and to write up every maintenance task the manual calls for. Then it’s your job to go over the list.For instance, the shop wrote up a substantial number of costly maintenance items not because any actual discrepancy was found, but because the items were “due” according to the maintenance manual. The word “due” is one of the most expensive words in the world of aircraft maintenance. Part 91 (non-commercial) operators are never required to perform maintenance just because the manufacturer says it’s due (unless it’s something mandated by an airworthiness directive or airworthiness limitation). We almost always recommend that such work be performed strictly on-condition rather than on the fixed timetable provided by the manufacturer. If something is working fine but the book says it’s “due” for replacement or overhaul, we usually suggest telling the shop “No thanks.”

The shop also wrote up discrepancies on items that the owner swore were working just fine. The shop claimed the nose steering was stiff, but the owner said the airplane had no steering issues. The shop said that voltage was fluctuating on the main and essential electrical buses, but the voltages looked stable when we reviewed recent engine monitor data. The shop said, “flight director bars do not respond to pitch movements” but the owner said the flight director and autopilot had been “working like a charm.” The owner declined all these items, too.

Then there were several legitimate discrepancies that did not rise to the level of airworthiness concerns that the owner chose to defer. The shop reported the nose gear fairing was cracked and proposed to repair it, but the owner said it had been cracked for the past three years and the crack was stable and not growing. The shop wrote up some corrosion-related discrepancies, but the owner decided to defer dealing with them until he was able to secure a hangar for the airplane. Those were reasonable judgment calls for the owner to make.

By the time we finished going over the discrepancy list with the owner, he’d decided to approve 11 of the 34 repairs recommended by the shop, and to decline or defer the remaining 23 items. The estimated cost to repair those 11 items came to about $2,000, while the estimated cost of the 23 declined items would have been north of $20,000. A short leash indeed!

Some readers might jump to the conclusion that this shop was overpriced and/or trying to take advantage of the owner, but I would strongly disagree. We love working with shops like this one that do thorough inspections and provide detailed discrepancy lists and repair estimates. As a Cirrus Authorized Service Center, the shop was obligated to write up all the “due” items in accordance with manufacturer’s guidance, and to perform all those manufacturer-recommended tasks unless the owner instructed them not to. To its credit, the shop did not complain when we advised them that the owner had approved 11 items and declined 23 others. They did the work the owner wanted done, refrained from doing the work that he didn’t, and presented an invoice with no surprises. That’s exactly the way things are supposed to work.

Is this a typical case? Well, yes and no. In my experience, when dealing with shops like this one whose annual inspections are thorough, it is common for one-half to two-thirds of the listed discrepancies to be items that can be prudently declined or deferred at the owner’s option. On the other hand, it’s a bit unusual for the declined items to represent 90 percent of the total estimated cost—that happened here because an extraordinary number of costly five-year items “came due” all at once.

At annual inspection time, it’s your shop’s job to find and document every discrepancy it can and to write up every maintenance task the manual calls for. Then it’s your job to go over the list and decide which items to approve and which to decline. To keep your IA smiling, avoid saying “no” to anything that’s a genuine airworthiness issue or that’s required by regulation (such as complying with an airworthiness directive or airworthiness limitation).