Editor's note: AOPA is saddened to learn that Peter Jenkins and his father Mark Jenkins were killed December 8 in an aircraft accident while on patrol in the Tsavo East National Park in Kenya, Africa. Remembering Mark Peter Jenkins
It started with two guys and a Cub. TacAero, which the National Business Aviation Association called “the fastest growing aviation company in the country” a few years ago, is a Pacific Northwest cadre of flying entrepreneurs who really do it all:

They train backcountry pilots in a fleet of CubCrafters aircraft; they take their graduates on backcountry adventures; they use taildraggers like human-flown drones for firefighting, search and rescue, and spotting moose in aerial surveys; they do tailwheel training for the Department of Defense; they have a division called Elite Aviator designed to hone piloting skills; and they sell aviation gear. They also do all this while having a lot of flying fun.

It was just Brian Prange and Jeremy Young when the company was founded in 2013, basing its mission initially on the realization that lessons Prange and Young had learned while under contract with the U.S. military in Afghanistan flying the Insitu ScanEagle unmanned aircraft system through Evergreen Aviation could be applied stateside. 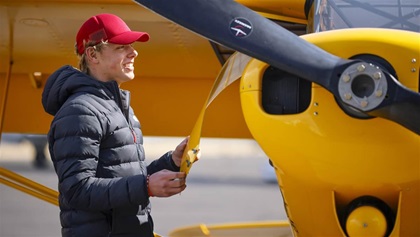 Peter Jenkins, a young officer with the British army and native of Kenya, spent a month in Hood River in late 2022 earning his private pilot certificate and tailwheel endorsement through TacAero. The Kenyan immersed himself in flying with instructor Lars Ljungqvist, earning his certificate after 64 hours, first flying a Piper J–3 Cub and then the CubCrafters Top Cub. His father, a wildlife conservationist in Kenya, encouraged his son to study at TacAero after several of the company pilots had visited there. “Flying with my dad had given me a bit of a love of flying. After I give back my time in the army, I’d like to get involved in conservation in Kenya in which aviation is a pretty useful tool,” Jenkins said. “The protected areas my dad has worked in are pretty large and if you don’t have an aircraft, it’s quite hard to see not only the areas getting impacted by humans but also see where there’s rainfall; if those areas have high rainfall its majorly where the wildlife is going to be and as a result of that it’s going to be a high impact area for poaching. An aircraft just makes it so much easier to access larger parts of the park.” In celebration of his new certificate, Jenkins and Ljungqvist were planning on flying the Top Cub out to the coast, an area the younger pilot had never seen. “Lars and I have landed in places where you probably wouldn’t be able to get to in other aircraft. It’s been great fun.”—JSW

“We were both deployed as UAV pilots to support OIF/OEF [Operation Iraqi Freedom/Operation Enduring Freedom] together and saw the potential of these technologies during the Iraq/Afghanistan conflict for domestic applications. Technologies include the advancement of sensors and drone capabilities,” Prange recalls.

A graduate of the University of North Dakota, a private pilot, and expert in unmanned systems, Prange, along with Young, saw that they could apply unmanned vehicle systems to manned aircraft if the aircraft is agile enough.

“We wanted to start a commercial endeavor and realized our love of general aviation—especially yellow Cubs—would actually make a great intersection since that aircraft well-represented the flight profile of the small UAVs we operated. It is called a ‘surrogate UAV’ when we mimic the attributes of a flying drone with a manned aircraft. We modified a Cub to start flight testing in Hood River and also got to work with precision agriculture mapping.”

A love for Cubs

“When we started TacAero, we had a love for Cubs and with the access to the Columbia River Gorge where the manufacturer of this drone technology was at, we were looking for a model aircraft that we could integrate these types of technologies into,” says Prange. “We had a serendipitous event where we met with Jim Richmond and the innovation that he brought to the classic backcountry aircraft...and in my opinion his genius in interpreting regulations and to advance the art. They were really interested in partnering with someone that could provide this type of value-add to their product and, in that process, they said they could really use someone who could train in these aircraft too.”

They found the perfect marriage with Jim Richmond’s CubCrafters aircraft. Richmond too had a love of the iconic Cub, and in 1980 he sold his home insulation business to repair and rebuild Piper Cubs. In 1999 his company introduced its first “new” aircraft and in 2004 it launched the Top Cub, a small fleet of which you’ll now find at TacAero headquarters currently in Hood River, Oregon.

“We approached CubCrafters to see if they were interested in partnering to provide a modified aircraft to the market that was ready for mission work. They were enthusiastic and also asked if we were interested in training tailwheel pilots,” says Prange. “The trifecta to offer the market is: technology, aircraft, and training. That really launched the partnership as we are their factory trainers, and deeply influenced the direction of TacAero to what it has become. Turns out more people wanted high-end tailwheel training than agencies wanted modified aircraft.”

Because of their experience in backcountry flying in CubCrafters aircraft, TacAero has developed some unique products: 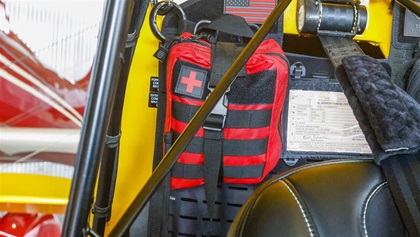 TacAero Aviation Survival Kit
The TacAero Aviation Survival Kit was created in collaboration with backcountry pilots and military SERE (survival, evasion, resistance, and escape) instructors. It is designed to fulfill the requirements for most backcountry emergency survival situations. Each piece of equipment in the aviation survival kit is hand selected and extensively field tested by professional pilots. Everyone, whether flying in the pattern or around the country, is encouraged to have a survival kit in their airplane that they know how to use, according to the company website.

Young has since left the company to pursue other interests (including winning STOL Drag competitions), and Andreas von Flotow is the company’s “transition” president. “I’m here to facilitate the transition of TacAero from a small conglomerate to a big group of companies,” says von Flotow, an engineer with Hood Technology and son of its founder Andy von Flotow. Hood Technology has developed a diverse range of products in aerospace and industrial dynamics and worked on imaging systems and catapults for the ScanEagle UAS. “TacAero has grown so much and it’s time for us to start specializing so our groups can do what they do best instead of being generalists,” says von Flotow. He, too, is an enthusiastic backcountry pilot and lover of the Cub.

“We only fly CubCrafter[s] aircraft, and we are constantly upgrading our fleet with the latest they’ve got. They really are just the best backcountry aircraft you can fly,” he says. “CubCrafters are great because they’re powerful, they are easy to fly, and they’re eminently upgradable. For example, we put Acme suspension on all our aircraft because it makes landing in the backcountry much, much safer and also easier in difficult terrain.”

In 2018 after graduating many pilots from its backcountry courses, TacAero embarked on a big adventure—taking 13 aircraft on an 18-day expedition into Alaska. From Hood River the group flew through Canada to Anchorage and back, traversing more than 5,500 miles. It was an epic adventure and one the company wanted to continue; Ian Waghorn and his wife, Tessa, are running the current expeditions and are relocating the training and expedition division of the company to Fredericksburg, Texas, in January 2023.

Insisting his role is “transitional,” von Flotow says he is working with TacAero because the company’s growth has been so fast in the past several years that it is experiencing “growing pains.” He is facilitating the concentration of the company on the three facets of the business—technology, training, and expeditions—putting people in those groups only in those roles. “Many people are being asked to be too many things. Being asked to be both a payload integration technician and a pilot and a backcountry flight instructor so it was distracting from their overall abilities. They are going to focus on what they do best. For example, Ian Waghorn is leading our backcountry flying group and moving them down to Fredericksburg, Texas, where it’s more central for our expeditions and the weather’s nicer. They will be focusing solely on backcountry training and expeditions. In Hood River we’ll still have our FBOs selling fuel and offering maintenance and basic training and then our payload integration flying where we offer surrogate unmanned services.”

It seems a shame that TacAero backcountry training will be leaving this gorgeous area, but while the challenges of flying here can be instructional, they can also be grounding. Wind gusts in the Columbia River Gorge can reach more than 55 knots—beyond challenging for even the most tenacious Cub.

“With regards to backcountry flying and expeditions, we really want to open this up to everybody. Aviation can be seen as an elite activity, and we want it to be available to anybody and everybody who wants to come out and learn backcountry flying,” von Flotow says. “We want our expeditions to be for everyone; you should come.” (We will; AOPA will join a TacAero expedition later this year.)