Don’t use exhaust gas temperature as a leaning reference

I respond to at least 100 queries from aircraft owners and pilots each week. At least a dozen of those are questions or requests for advice about leaning, and most of them relate to exhaust gas temperature. A few common ones: 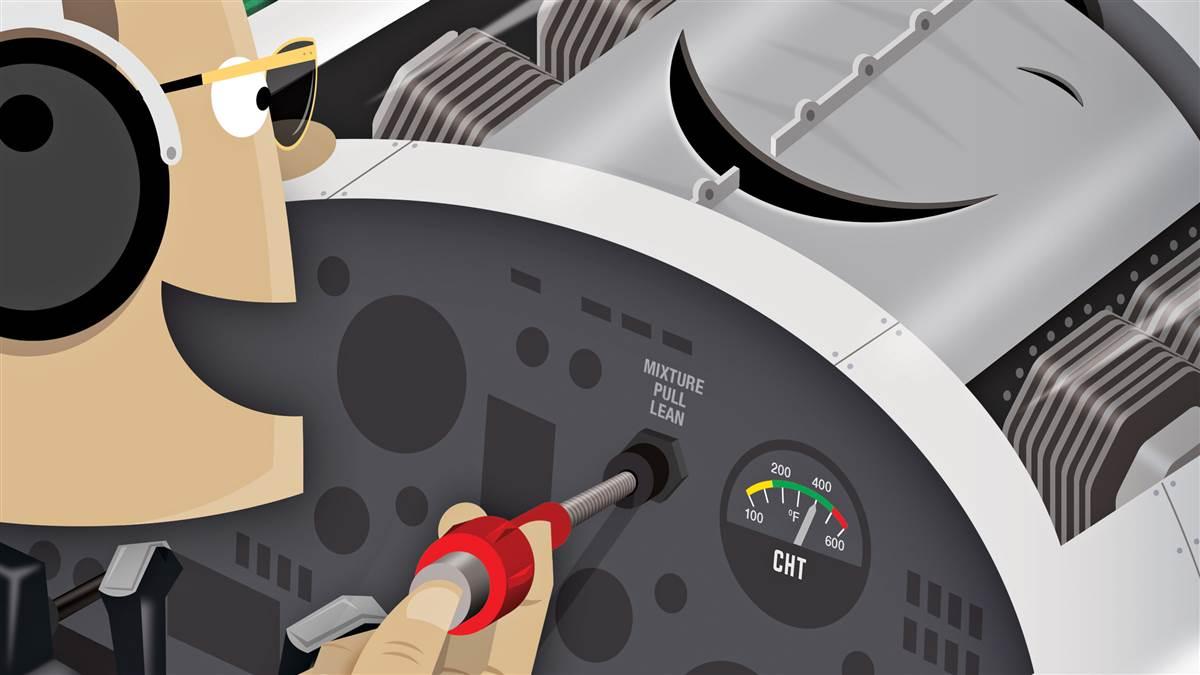 Q: My POH recommends leaning to 50 degrees Fahrenheit rich of peak EGT, but your articles/webinars/books seem to say I shouldn’t do this. What’s with that? 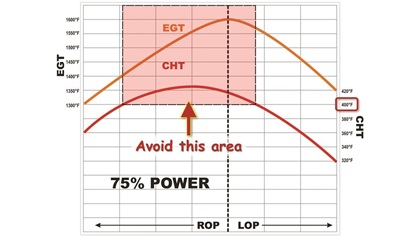 A: In the 1960s or 1970s when your airplane’s POH was written, engineers believed this was a good way to lean the engine. Since then, we’ve learned a lot more about the effect of mixture on the combustion event—largely through the research efforts of George Braly at the world’s most advanced piston aircraft engine test facility he created at General Aviation Modifications Inc. (GAMI) in Ada, Oklahoma—and we now know that 50 degrees F rich of peak is very nearly the worst possible mixture for engine longevity. I recommend against leaning to 50 degrees rich of peak because I want your engine to live long and prosper. 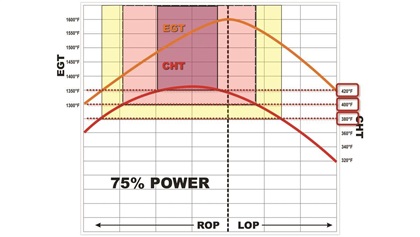 A: I recommend against using EGT as a leaning reference. Google “Mike Busch leaning” to find lots of information about what I recommend. 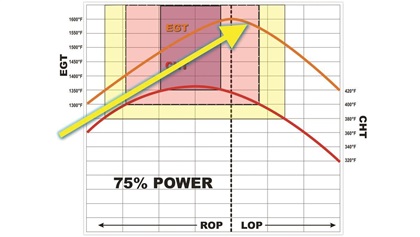 Q: How many degrees lean of peak do you operate the engines in your Cessna Turbo 310 in order to obtain the phenomenal engine longevity you’ve achieved?

A: I have no clue. Since I never use EGT as a leaning reference, I have no idea how many degrees lean of peak I operate—nor do I care.

If you slowly pull back on the mixture control while watching EGT, you’ll see that it goes up to a certain point, then starts coming back down as you continue to lean. The mixture at which EGT stops rising and starts falling is called “peak EGT.”

Combustion is a chemical reaction in which certain substances (reactants) combine with one another to produce other substances (products). For gasoline engines, the reactants are mainly the fuel hydrocarbon octane (C8H18) and the air component oxygen (O2), and the resulting products of combustion are carbon dioxide (CO2) and water (H2O) plus a bunch of liberated energy (heat) that our pistons, crankshafts, and propellers convert into airspeed. A chemist might describe the combustion of gasoline using the formula:

Note that it takes precisely 25 molecules of oxygen to combust two molecules of octane. We can achieve this ratio by combining 14.7 pounds of air with 1 pound of gasoline. This is the “stoichiometric” (chemically perfect) ratio of air and fuel that would theoretically result in no leftover oxygen or octane after combustion takes place.

Is peak EGT the place to be?

For best power, you need an air-fuel ratio of about 12.5-to-1, quite a bit richer than stoichiometric, which occurs at about 100 to 125 degrees F rich of peak. This rich mixture burns somewhat dirty (due to unburned hydrocarbons), but it also burns faster which yields a bit more power. For full-power takeoffs, we use an even richer mixture for increased detonation margin.

For best economy, you need an air-fuel ratio of about 16-to-1, quite a bit leaner than stoichiometric and so significantly lean of peak. Such a lean mixture burns very clean and reduces combustion pressure and temperature, which is great for engine longevity but at the sacrifice of some power and airspeed.

Whether you want to go fast, go far, or make your engine last a long time, peak EGT is probably not where you want to operate. There are better places to be.

The key to longevity is avoiding excess stress—something that is true for both engines and humans. For engines, the best measure of stress is peak cylinder pressure. Operating at excessive peak cylinder pressure is abusive and can shorten engine life. George Braly calls this “operating inside the red box” and it’s obviously something we’d like to avoid.

To stay out of the red box, I generally recommend keeping CHTs no higher than 400 degrees F for Continentals and 420 degrees F for Lycomings. If you plot CHT and EGT as a function of fuel flow, you’ll see the most abusive place to be (maximum CHT) is about 40 to 50 degrees F rich of peak, right where lots of POHs urge you to operate. The red box varies with horsepower—it’s wider at high power settings and narrower at reduced power. If power is low enough—say 60 percent—the red box goes away.

If you find yourself inside the red box (especially the magenta part), get out ASAP. There are three ways to get out: exit the left side (by enriching a lot), exit the right side (by leaning to lean of peak), or exit the bottom (by reducing power).

EGT as a leaning reference

Let’s circle back to why I don’t use EGT as a leaning reference and recommend that you don’t either, and why I especially caution against using the “lean-find” mode that most engine monitors have these days. To lean using EGT as a reference—say to 50 degrees rich of peak or 30 degrees lean of peak—you first need to find where peak EGT is. To do that, you must lean to the point where EGT stops climbing and starts falling—and do this quite slowly to avoid overshooting too far, because the EGT probes have relatively slow response times.

Here’s the rub: If you do this, you’re intentionally going inside the red box and usually the magenta box—and to make matters worse, you’re doing it slowly. That can’t be good for the longevity of your engine, can it? Actually, we know it’s bad, and here’s how:

In 2010 to 2011 we started to see an epidemic of cracked ceramic nose core insulators in Champion fine-wire spark plugs. A lot of these were in Cirrus SR22s—especially the turbonormalized ones—but some were in other makes and models as well. We weren’t seeing cracked insulators on Champion massive-electrode plugs, nor on fine-wire plugs from Tempest.

A cracked nose core insulator can trigger violent preignition that can destroy a cylinder and/or piston in a minute or so. After seeing a couple of cases where this apparently happened, Cirrus issued a service bulletin calling for removal of Champion fine-wire plugs, and Continental Motors stopped shipping new engines with these plugs installed. 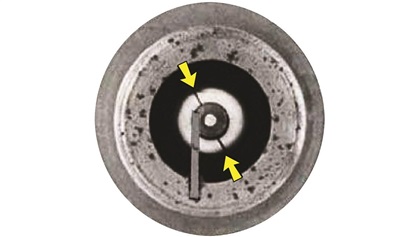 Champion was understandably unhappy with this turn of events. They issued a Service Letter SL74-10-001 stating that no manufacturing defects had been found in their fine-wire spark plugs, and that these plugs were being manufactured on exactly the same production line using exactly the same production methods as they had been for at least 20 years. Champion blamed the cracked insulators on the fact that Cirrus encouraged SR22 pilots to operate lean of peak, which according to Champion “can increase the likelihood of detonation and/or pre-ignition which will potentially cause significant engine damage, including damage to spark plugs.”

Champion’s explanation didn’t make much sense to us. The maximum likelihood of detonation and/or preignition occurs in the middle of the magenta box around 40 to 50 degrees F rich of peak, and it’s almost impossible to get a cylinder to detonate if it’s operating lean of peak. I’d been operating the big Continentals on my own Cessna Turbo 310 lean of peak for decades without a hint of detonation or preignition, and have thousands of clients who operate lean of peak with no issues.

We investigated more deeply with the help of a very smart former Continental Motors vice president of engineering. We discovered that it wasn’t operating lean of peak that was causing the spark plug insulators to crack, it was how pilots were transitioning from rich of peak to lean of peak that was responsible. Cirrus switched from Avidyne to Garmin in 2008, and started encouraging Cirrus pilots to use the fancy lean-find feature of the Garmin Perspective avionics to operate the engine at a recommended lean of peak cruise mixture. Of course, doing this required dawdling inside the magenta box for a considerable period of time to allow the software to locate peak EGT, causing the cylinders to go into light detonation—not heavy enough to damage the cylinders, but sufficient to cause the delicate nose core insulators of the Champion fine-wire spark plugs to crack. Those plugs were the canaries in the coal mine.

So, while Champion’s explanation for the cracked insulators was wrong, it was close.

That’s why I always transition from rich of peak to lean of peak as rapidly as possible, spending no more than a second or two passing through the red box. I call this the “Big Mixture Pull” (BMP), a term coined by George Braly and taught in his Advanced Pilot Seminars.

Now you know why I can’t answer questions like “how many degrees LOP do you operate your Cessna Turbo 310?” I honestly don’t know the answer, and to find out I’d need to spend time inside the magenta box locating peak EGT, something I’m disinclined to do. I really don’t care how many degrees lean of peak I operate.

What I do care about is staying outside of the red box, which means focusing on keeping CHT well-controlled. I also pay attention to fuel flow, because that’s what determines power when operating lean of peak. I ignore EGT when I’m leaning. It’s all about CHT and fuel flow.

Don’t get me wrong. I’m not saying EGT isn’t important. It’s immensely useful for troubleshooting engine problems. It’s just lousy as a leaning reference, and now you know why.

If you’re still unconvince at a reduced power setting where the red box isn’t an issue. Alternatively, you can start by doing a BMP and then try finding peak EGT by enriching from the lean side, which is a lot less abusive than the usual method of leaning from the rich side.