It’s training time in an amphibious Cessna 208B Caravan, and the next simulated emergency is an engine failure. My chosen off-field landing site is an oval-shape Minnesota lake about four miles ahead and 4,000 feet below. Gliding there in most single-engine seaplanes would be a cinch—but not this time.

“The float Caravan is a study in aerodynamic drag,” says Brian Addis, a former test pilot at Wipaire in nearby St. Paul, Minnesota. He sets up a worst-case scenario by pulling the 675-horsepower Pratt & Whitney PT6A-114 to idle, keeping the three-blade propeller at fine pitch (high rpm) so that it acts as an air brake, and leaving the flaps full down at 30 degrees.

“The book says to maintain 85 knots, but that’s not nearly enough, so shoot for 100,” he adds dryly. “That’s a nice, round number that should be easy to remember.”

I push the airplane’s long, pointy snout downward to 15 degrees below the horizon, then 20, while the lake I’m aiming for rises steadily in the wraparound windshield. The airspeed indicator is showing 85 knots—too slow—so I dive even more steeply at 25 degrees and feel my shoulders press against the harness. Airspeed finally stabilizes at 100 knots, but the plunging rate of descent is approaching 3,000 feet per minute, and the lake is suddenly far out of reach. My current trajectory would meet the ground at least a mile short of the marshy shoreline.

“A piano’s got a better glide ratio than a float Caravan—unless you feather the prop,” says Addis, 77, a retired college professor who knows how to make an impression. “The one thing you should take away from this exercise is that feathering the prop after an engine failure is absolutely vital to a successful outcome.”

Other training tasks highlight the float Caravan’s power, grace, and versatility. A rough-water takeoff allows the deep V-shape hulls in the Wipline 8000 floats to cut through wind-driven whitecaps as the surface wind gusts to 25 knots. The wind-assisted takeoff run is remarkably short and brief, as the lightly loaded amphib rises off the water in about 12 seconds at 55 KIAS. A confined-area landing brings the Caravan to a stop in less than 500 feet when the pilot pulls the propeller into reverse. Step-turns are smooth and stable regardless of the wind angle. And moving the prop in and out of flat pitch (beta) allows the pilot to precisely adjust for wind and current while docking.

On land, the airplane has an impossibly tiny turning radius despite its wide wheelbase, and it’s remarkably tolerant of crosswinds. The only real adjustment to make on landing is that the high cockpit height means the main wheels touch down a few seconds before the pilot thinks they should.

The Caravan’s long, strange trip from inglorious night freighter to luxury air yacht is beyond unlikely. FedEx was the launch customer for the unimaginatively named “Cargomaster” and bought hundreds of them following its FAA certification in 1984. Then, the overnight delivery firm was looking for rugged, reliable air transportation that could carry two standard freight cans and allow the company to better serve small markets. FedEx didn’t care at all about the airplane’s looks or speed, because they wouldn’t fly far from its U.S. sorting hubs. It wanted one pilot per airplane, no type rating requirement, and “absolutely, positively” excellent dispatch rates.

Cessna built the boxy fuselage around FedEx freight cans, added a gigantic cargo door accessible by forklift, left the wheels open, used a strut-braced high wing despite the drag penalties, and chose a Pratt & Whitney PT6A turboprop for reliability even though it used more fuel—particularly at low altitudes—than piston engines. Cessna generally seemed OK that its airplane wouldn’t win any beauty contests. And buyers who had nothing to do with night freight weren’t dissuaded, either.

Wipaire joined the fray by building and certifying amphibious floats for the Caravan. The company’s metal floats transformed the airplane into an all-surface adventure machine. Amphibious floats are heavy and mechanically complex with internal electric and hydraulic systems. They change a fixed-gear airplane into a retract, and they come with a gear position warning system designed to ensure that pilots land with the wheels up in water and down on land.

Despite this reduced performance, the places a float Caravan can go capture the imagination: The Inner Passage to Alaska; the Bahamas, Florida Keys, Outer Banks, New York Harbor, Maine, Arctic Canada, Alaska, the Pacific Northwest, San Francisco and San Diego harbors; and the Sea of Cortez, just to name just a few in North America. Few other single-engine airplanes can reach such exotic places with such reliability, or such style.

On the ramp, the float Caravan is a towering presence. Fueling can require parking the truck under a wing and climbing atop the cab to reach the fuel cap—a process that excludes the acrophobic. Single-point refueling is an easier option, and most Caravans are equipped for it, although many FBOs aren’t.

Preflight inspection requires opening both sides of the metal cowl while balancing atop the floats, and getting into the cockpit is like climbing a jungle gym: there are two footwells in the side of each float to help the process, and two ladder-like external steps lead to the cockpit. Strap into the five-point harness, adjust the seat (which, like a captain’s chair, has retractable armrests on both sides) and it’s time to get to work.

Almost all Caravans built in the last dozen years have a Garmin G1000 avionics suite, and those built earlier than that are a hodgepodge of mix-and-match equipment.

The engine start controls are logically laid out on the extreme left side of the cockpit, and the sequence is standard PT6A. Master on, check battery voltage, boost pump and ignition on, then engage the starter. Wait for 12 percent Ng, then move the condition lever to low idle. Monitor interstage turbine temperature and fuel flow as the engine lights, then move the prop out of feather. Taxiing requires differential braking, and the relatively small front tires let you feel every crack in the pavement.

Set 20 degrees of flaps before takeoff, then line up with the centerline. Acceleration is moderate, and rudder authority feels nonexistent at first, but it becomes crisp and responsive once takeoff power is set and the prop reaches full rpm at about 20 knots. Firm back pressure on the yoke keeps some weight off the front wheels as the Caravan lunges forward, and heavy right rudder counters its powerful left-turning tendencies.

“Your left arm and your right leg get a real workout flying a Caravan,” Addis says.

Hold tewheels off the ground in a shallow wheelie, and the main wheels lift off on their own at about 70 KIAS. Hold a 10-degree nose-up attitude as the Caravan accelerates through 80 KIAS, then partially raise the flaps to 10 degrees, and raise them all the way at 90 KIAS.

Trim off the back pressure and climb out at 100 KIAS.

The airplane is remarkably stable in every axis. Control forces are moderate and well balanced, and the view outside is expansive—even while climbing. Most floatplanes are unstable in yaw, but a pair of extra vertical fins on the float Caravan’s horizontal stabilizer help keep it straight. Steep turns produce a noticeable overbanking tendency that’s easily countered with opposite aileron.

Stalls, both power-on and power-off, are preceded by pronounced aerodynamic buffeting and an aural warning. Stall breaks are soft and even, and recovery is nearly immediate with a relaxation of back pressure and a reduction in angle of attack.

We fly to the confluence of the Mississippi and St. Croix rivers for water takeoffs and landings, and it’s there that the amphibious Caravan comes into its own. With the flaps fully down at 30 degrees, wheels retracted, and the prop at high rpm, the Caravan is stable yet responsive as it approaches the water at 75 KIAS and a 500 foot-per-minute rate of descent. Round out, fly into ground/water effect, raise the pitch attitude to 7.5 degrees and hold it there with increasing back-pressure as the airplane decelerates and you wipe off the last bit of engine power.

The floats settle smoothly into the water, and that’s your cue to raise the flaps, pull the condition lever to low idle, and lower the water rudders by moving a long, over-center lever on the floor between the front seats. The feeling is absolutely sublime.

Water takeoffs are exhilarating. With water rudders up, flaps set to 20 degrees, high idle, ignition on, and max prop rpm, push the power lever forward and hold full up elevator as the airplane surges ahead like a speed boat. It takes about six seconds to get “on the step,” then release most of the back pressure and hold a 7.5-degree pitch attitude. It takes significant right rudder to keep the airplane tracking straight. At about 50 KIAS, there’s enough aileron authority to raise one float to reduce hydrodynamic drag, but the airplane accelerates so smoothly and rapidly that raising a float doesn’t seem necessary. The airplane comes off the water with a little encouragement at about 60 knots, then accelerates rapidly in ground effect beyond 80 knots even with flaps down.

This particular Caravan is a 1998 model formerly owned by entertainer Jimmy Buffett. It’s equipped with a radar altimeter for glassy water landings, a depth finder that shows underwater obstacles, and a satellite phone. But the most useful accessory is a dedicated button that disables nuisance GPS terrain warnings without having to dig deep into the GPS menus.

Addis emphasizes real-world scenarios during four days of ground and flight training. He requires flying instrument approaches at cruise speed until a half-mile from the runway threshold, then chop the power and land normally on the fixed-distance markers.

“You’ll need to do that sometimes at busy airports to fit in with faster traffic,” he says. “And it’s not a problem.”

No-flap water takeoffs and landings dramatically increase the time and distance required to get airborne, but they may be necessary to avoid getting stuck in a remote area. Generator and engine failures, split flaps, avionics malfunctions, and ice avoidance are part of the checkout too, and most are based on actual events that have taken place among the Caravan fleet over the tens of millions of hours they’ve flown in the last 40 years. In addition to the official Cessna checklist, Addis provides his own cheat sheets that are boiled down to essential items only.

Addis, a Vietnam infantry vet (1968), former flight school owner, FAA pilot examiner, and inductee into the Minnesota Aviation Hall of Fame, has largely retired from active flight instruction—but he still does Caravan checkouts because he enjoys the airplane so much.

“There’s an air conditioner for summer and a heater in winter—and they both work really well,” he says. “The cockpit is incredibly wide and has an expansive view, and the airplane is totally obedient and devoid of vices...It’s an absolute delight.” 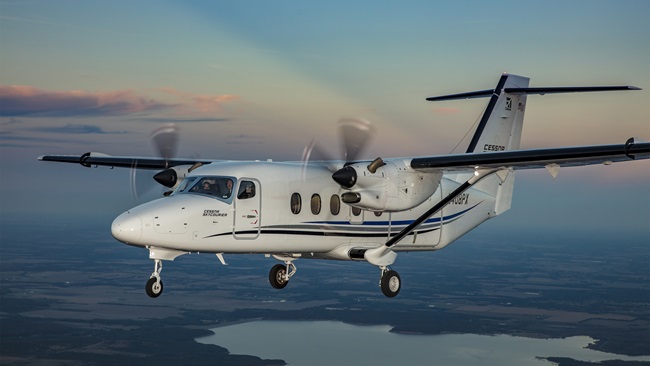