Get the app Get the app
Already a member? Please login below for an enhanced experience. Not a member? Join today
News & Media Publications Preflight Featured Images 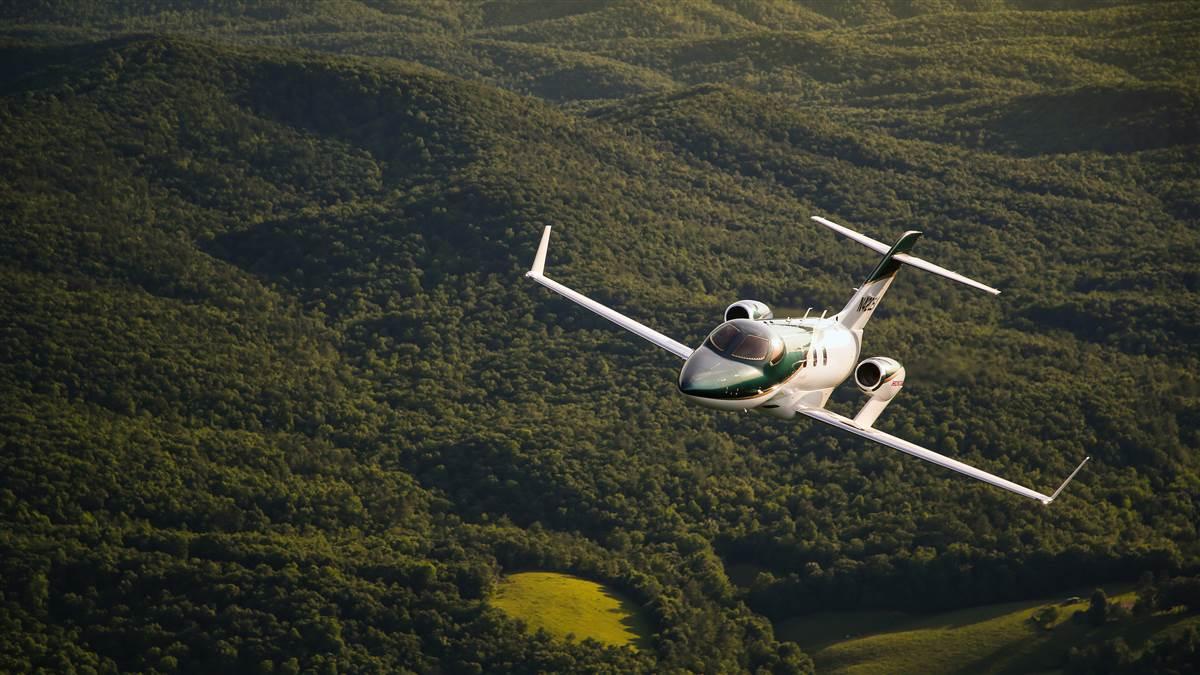 FASTEST IN CLASS. The HondaJet was finally put into production this year after more than a decade in development, designed to be the fastest in its class. It's a super-lightweight business jet that can carry up to six passengers and it can bet flown single pilot. The Japanese company is building the airplanes in Greensboro, North Carolina, where this photograph was taken. 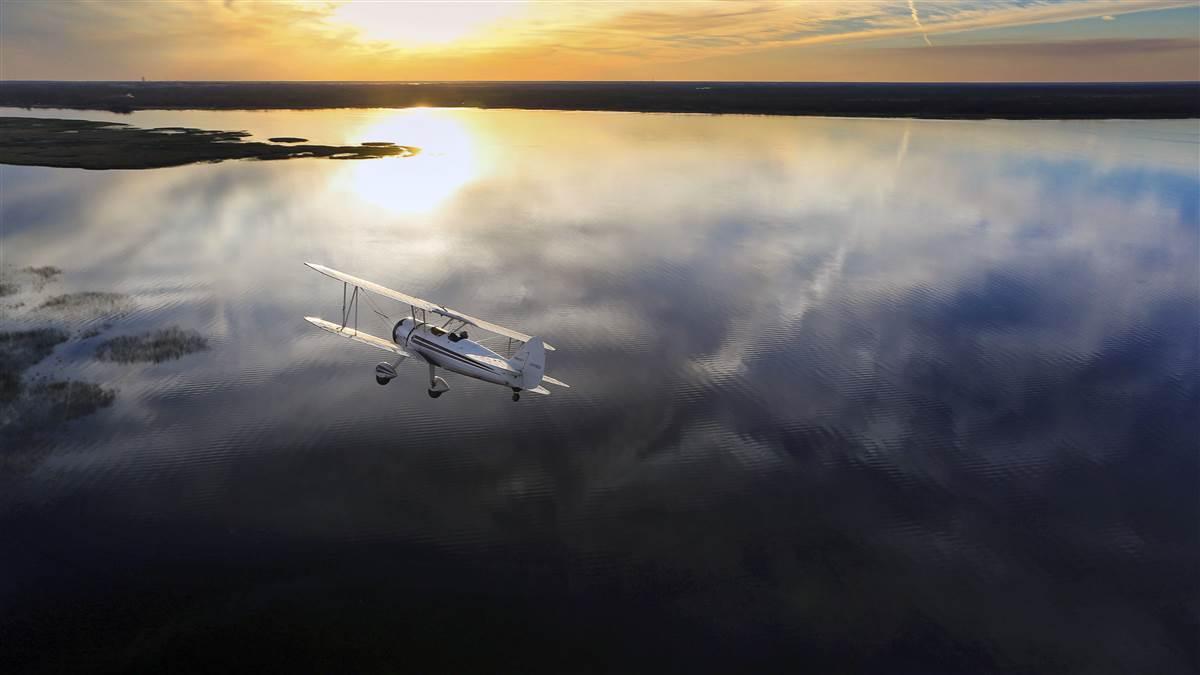 EXPLORING THE EVERGLADES. A Stearman Model 75 biplane meanders over Lake Istokpoga near Sebring, Florida, its Lycoming R-680, 300-horsepower engine rumbling, and a swirling breeze blowing through its open cockpit. This Stearman is owned and flown by Walt Fricke, founder of the Veterans Airlift Command, a volunteer organization that provides free flights for wounded vets and their families.

WHAT: Stearman biplane
WHERE: The Everglades, Florida
PHOTOGRAPHER: Chris Rose 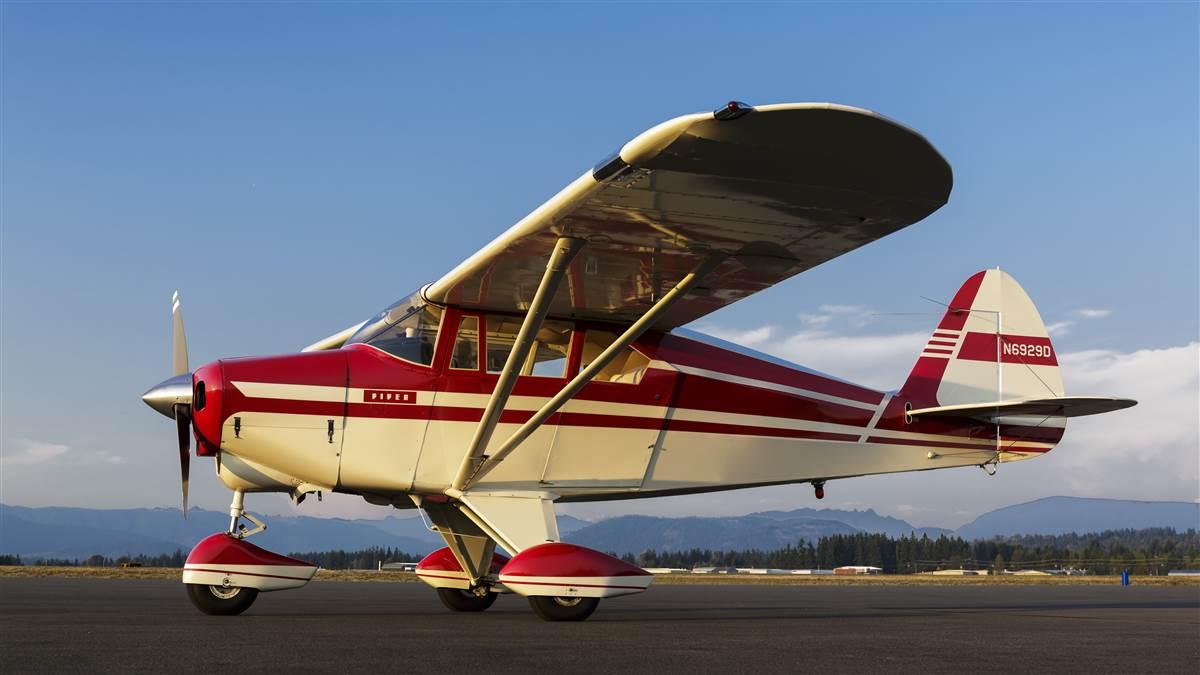 OVER THE TOP. Some owners just want the prettiest, most well-equipped aircraft they can buy. In this case, owners Dave and Stacy Serling got lucky when they bought this restored Piper Tri-Pacer—its restoration and improvements totaled nearly $100,000. That's the price of three Tri-Pacers in excellent condition combined. It won the prize for best restoration of its kind a the 2012 EAA AirVenture in Oshkosh. 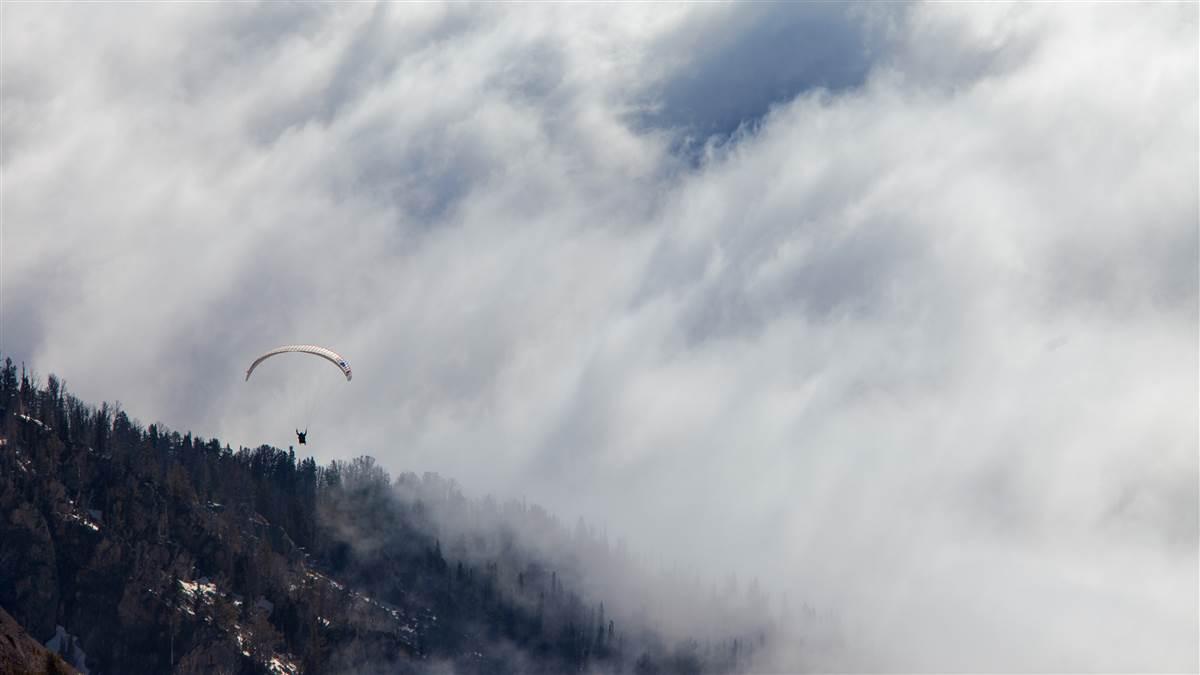 IN THE BREEZE. Paraglider's launch from Rendezvous Mountain. The view, the quiet, and the wind in one's face draw pilots to paragliding out of the Jackson Hole resort at Teton Village. 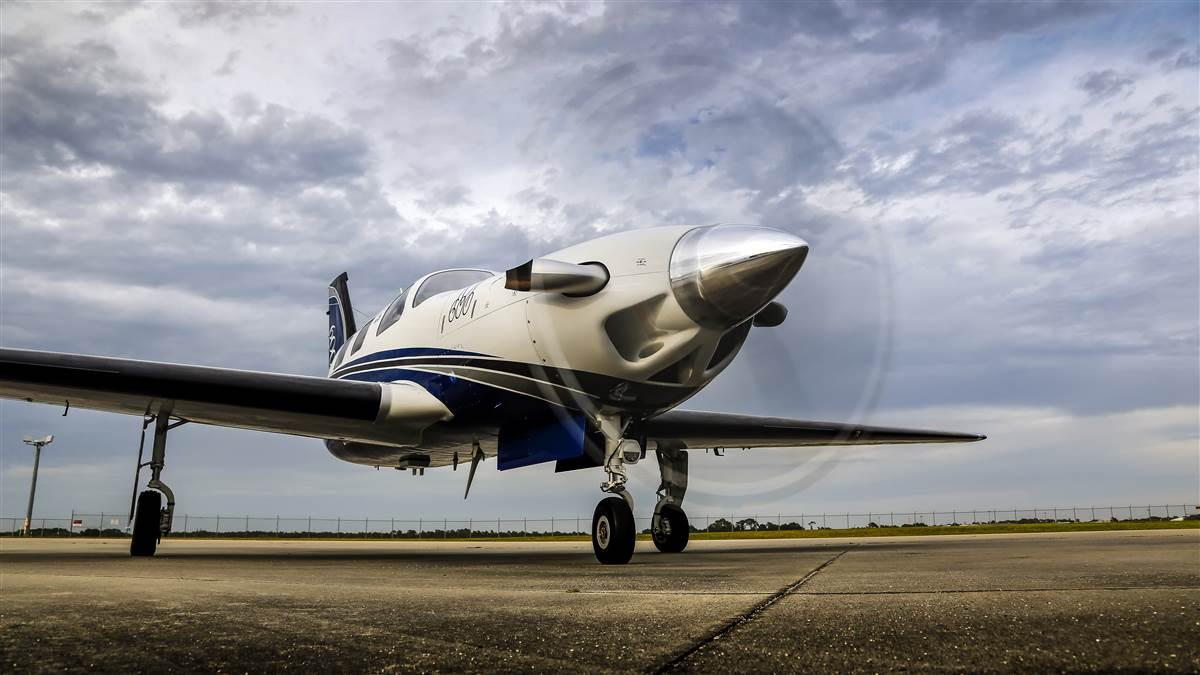 M CLASS. Piper Aircraft introduced the M600 in 2015 as a true business-class airplane. This single-engine turboprop can take its pilot and passengers—bags, too—at speeds of up to 274 knots true for up to 1,441 nautical miles. 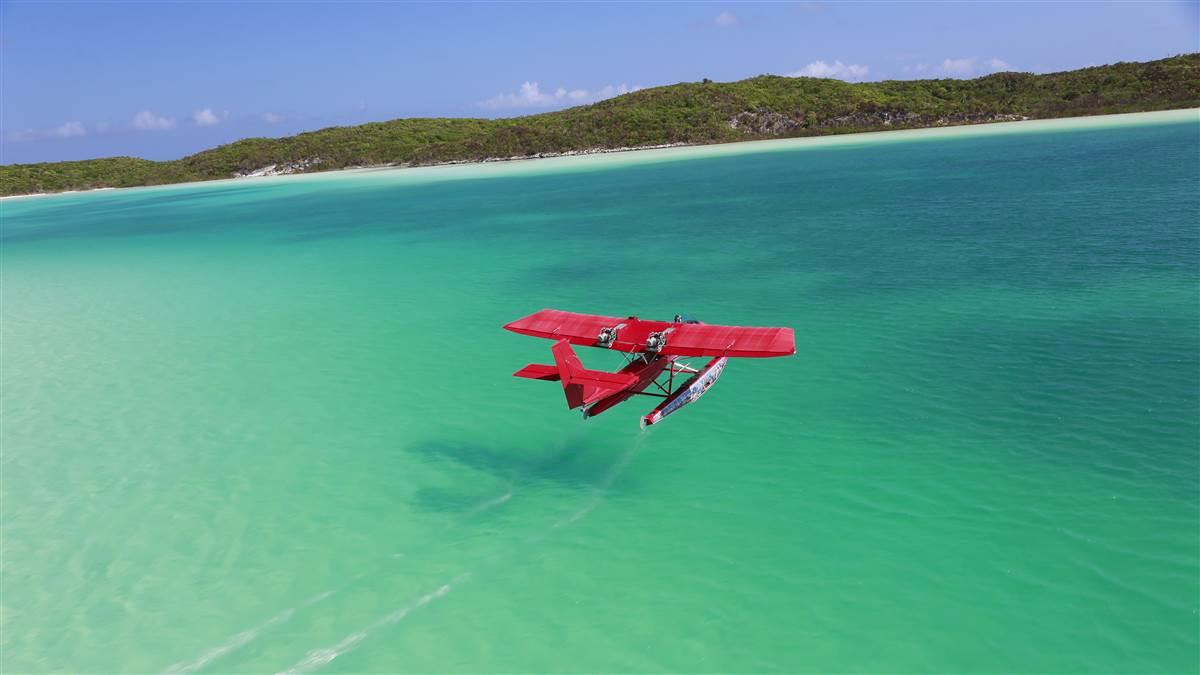 Bahamas beachcomber. The AirCam is a photographer’s delight, but the twin-engine, two-seat aircraft usually is the photo platform, not a subject. Here, an AirCam rises from the surface of a shallow lagoon on Long Island in the Bahamas. About a half-dozen AirCams and their pilot owners made the daylong trek from South Florida and spent several days splashing and dashing along the pristine coastlines of the more distant “Out Islands.” Learn more online (www.aopa.org/pilot/aircamphotos). 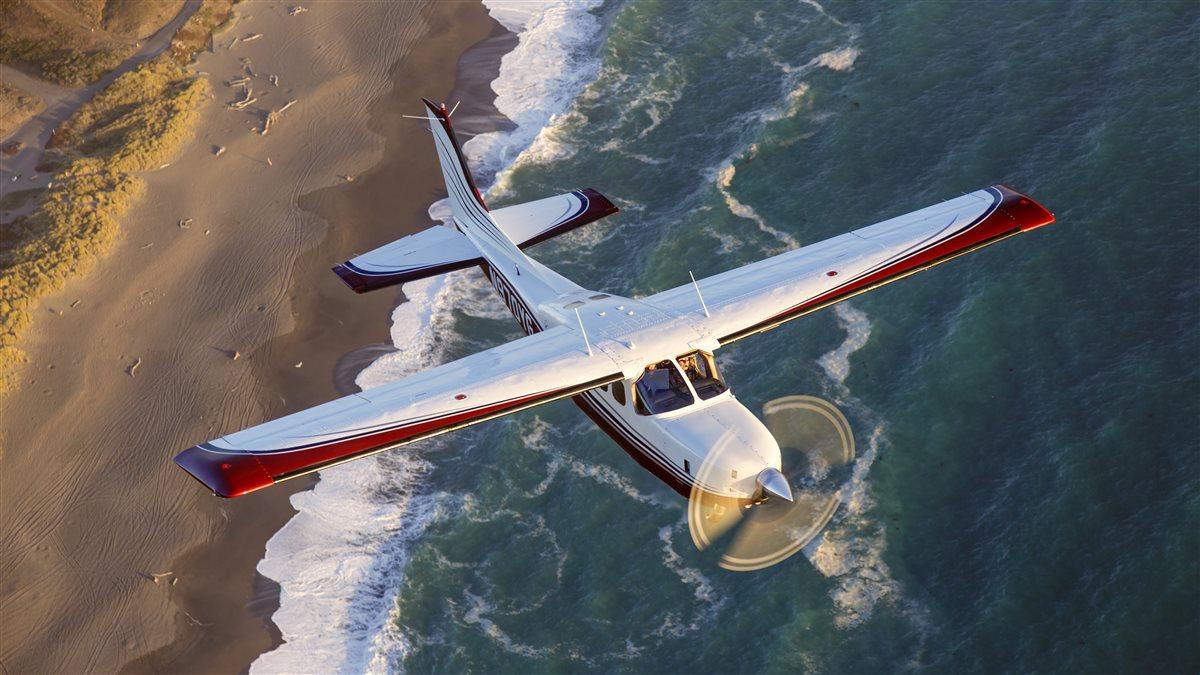 High Flier. This is a Silver Eagle, a modified Cessna P210 featuring an engine conversion by O&N Aircraft Modifications. Heavy modifications can change an aircraft's performance and, in this case, the turboprop P210 can reach 23,000 feet and cruise around 200 KTAS at 16,000 feet. Turbine aircraft owners look for safety as well as speed in in their aircraft, usually used for long-distance travel. 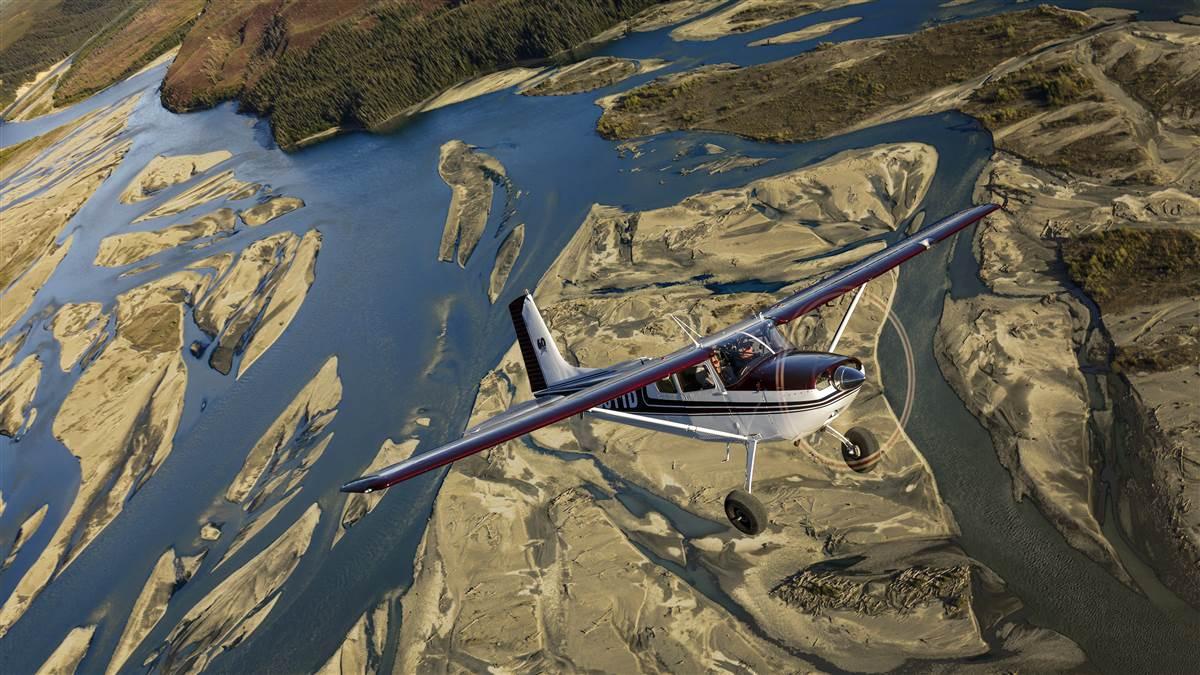 Propeller power. You don't need a jet engine to fly fast and high. Although it was in production for just eight years, the twin turboprop Cessna Conquest II is fast, comfortable, capable, versatile, and economical to operate. With two Honeywell TPE331-10N engines, this 1981 Conquest II can cruise at up to 311 knots at Flight Level 290.

Go Far. For venturing out where 100LL avgas is hard to find, Glasair offers the option of a diesel engine for its Sportsman model. Glasair builds kits in Arlington, Washington, and has eyes on the international market, where the price difference between Jet A and avgas can be as much as $15 a gallon. Where a gallon of jet fuel costs $4.50, avgas might be as much as $20—if avgas is available at all.

In South Florida, Douglas DC–3s help control the mosquito population. These turbine conversions of the Douglas classic await their missions in the hangars of the Lee County Mosquito Control District. The turboprop DC–3s are used for aerial spraying May through October. However, they are soon to be replaced by Beechcraft King Airs, which will deliver a quieter application as they are equipped with ultra-low-pressure-spray systems. It’s only fair—the DC–3s replaced their louder predecessors, the military-surplus, radial-engine C–47s first used for the task in the 1950s.

PBY Catalina aircraft were originally built to defend the coasts of the United States but also served as bombers, escorts, and transports during World War II. Pilots affectionately called them Cats, Pig Boats, or Dumbos. This PBY—the P is for patrol, B for bomber, and Y designates it was built by Consolidated Aircraft—is painted in pre-war colors. It was restored by Jim Slattery for his Greatest Generation Museum at Gillespie Field in San Diego.

The air up there.

Cluster balloonist Jonathan Trappe takes floating to a whole new level as he soars above a cloud layer (see “How it Works,” p. 14). Trappe was on his way from Maine, attempting to cross the Atlantic Ocean in the gas balloon system. He landed in Newfoundland after calculating he wouldn't reach his goal.

WHAT: Custom-built cluster balloon with boat gondola
WHERE: Somewhere over the Gulf of St. Lawrence in eastern Canada
PHOTOGRAPHER: Jonathan Trappe

Flying over the Great Lakes—or any open body of water—takes extra planning. You'll need to pack survival gear such as life vests, a life raft, signaling devices, flashlight, and handheld VHF radio. This Cirrus is equipped with a parachute, but if you were to ditch in the water, a thorough read of Aeronautical Information Manual Section 6-3-3 is good preparation. But don't let a fear of the water ruin your fun. Flying over a serene sea to a faraway place is part of a pilot's special perspective.

Where can you view SAM 27000—known when carrying the president as Air Force One? Head to the Ronald Reagan Presidential Foundation and Library in Simi Valley, California. There, find out how this customized Boeing 707—the last of the 707s used in presidential service—was disassembled and then trucked over more than 102 miles of roads and freeways. It was reassembled over a period of 10 weeks, and now sits in the Air Force One Pavilion.

WHAT: Boeing 707-353B
WHERE: Ronald Reagan Presidential Foundation and Library
PHOTOGRAPHER: Mike Fizer

Tough trainer. The North American SNJ-5 trained generations of pilots in the United States Army Air Force and U.S. Navy to fly air combat maneuvering, aerial gunnery, and ground attack. It continued to serve as a primary training platform into the 1970s. The SNJ-5 cruises at 145 miles per hour, with a range of 730 miles and a climb rate of 1,200 feet per minute. A lightly wing-loaded tailwheel airplane, it demands careful attention to proper rudder pressure and does not reward ham-footed pilots. 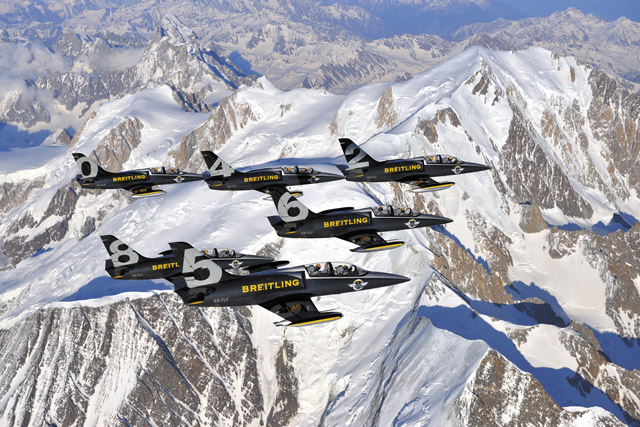 Breitling jet team. Now touring in the United States for the first time, the L-39 Albatrosses—piloted by many former members of the French Air Force—perform a precise ballet in the sky unlike most airshow performances you'll see. Led by Jacques Bothelin (see "Debrief," p. 56) the team is a unique group of highly experienced pilots who have been performing together for more than a decade. Sponsored by the Swiss watchmaker, the Breitling Jet Team's American Tour takes place across the country this summer. 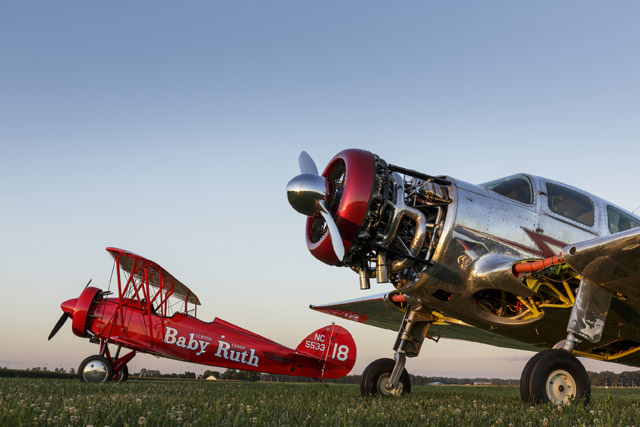 Pristine Queens. Thirty coats of paint glisten on the 1928 Waco ATO—Baby Ruth—while in the foreground a 1939 Spartan Executive 7W shows off a highly polished aluminum fuselage. Both aircraft reside at the Historic Aircraft Restoration Museum at Creve Coeur Airport near St. Louis, Missouri. Some 10,000 people a year come to visit the airplanes, which beautifully tell the story of aviation from its teen years into adulthood. 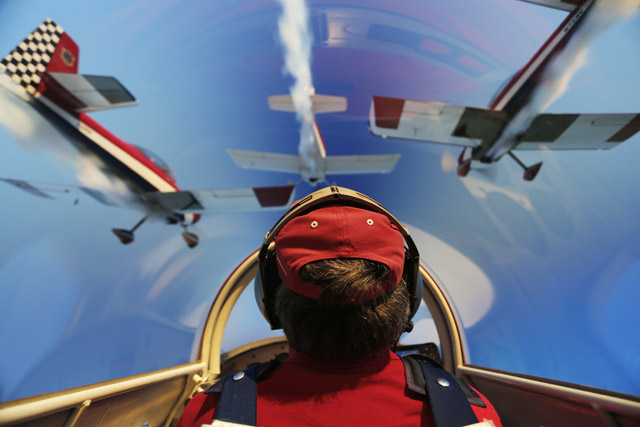 Staying in formation. It seems that once you get a taste of formation and aerobatic flying, it never leaves you. These pilots, who call themselves the Mavericks, are former airshow performers in their 70s—yet they continue to fly together for the sheer satisfaction and enjoyment. They train together at least once a week, polishing their technique and keeping their skills sharp. 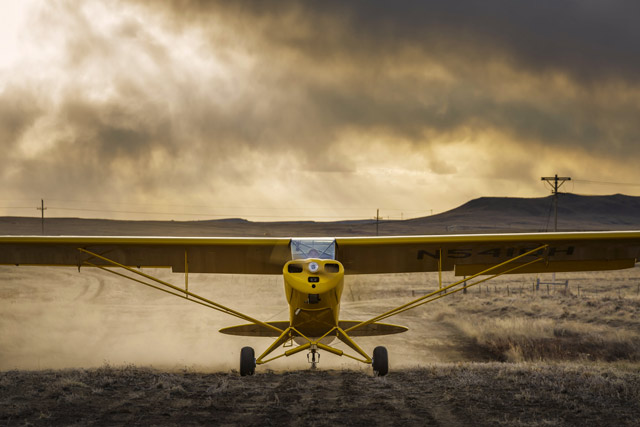 Cub-nificent. The first Piper Super Cub took its maiden voyage on November 23, 1949. It spent decades as a working airplane in Idaho and Montana. When Darin Meggers and his father, Roger, bought the airplane, they decided to take it apart completely and restore it to factory original condition. The airplane has won awards at EAA AirVenture and Sentimental Journey, the annual Piper fly-in at Lock Haven, Pennsylvania—where the Super Cub was born.

How low can you go? When flying a highly maneuverable aircraft such as a helicopter, you can view the world from a completely different vantage point. The Enstrom F-28F, which can seat up to three people, is shown here hovering above Green Bay near Menominee, Michigan, the location of the Enstrom factory. 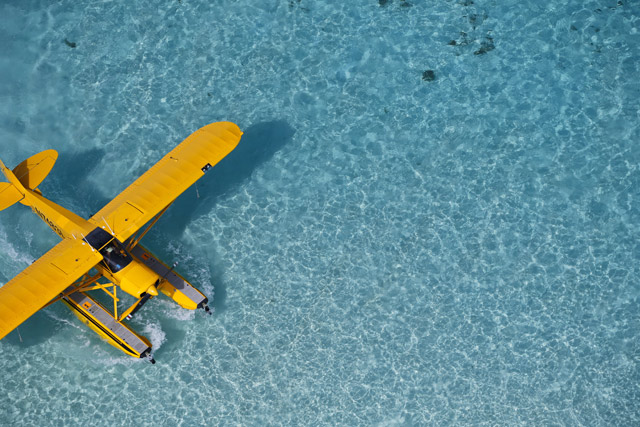 Fun in the sun. “Low and slow” takes on a whole new meaning when flying above the turquoise waters of the Bahamas. Here, a Super Cub on floats taxis to a spot near Pittstown on Crooked Island for some snorkeling and fishing. The availability of  aviation fuel at Out Island airports occasionally can be questionable—an FBO could be closed, or a fuel pump could be malfunctioning—so pilots often carry spare gas cans just in case. 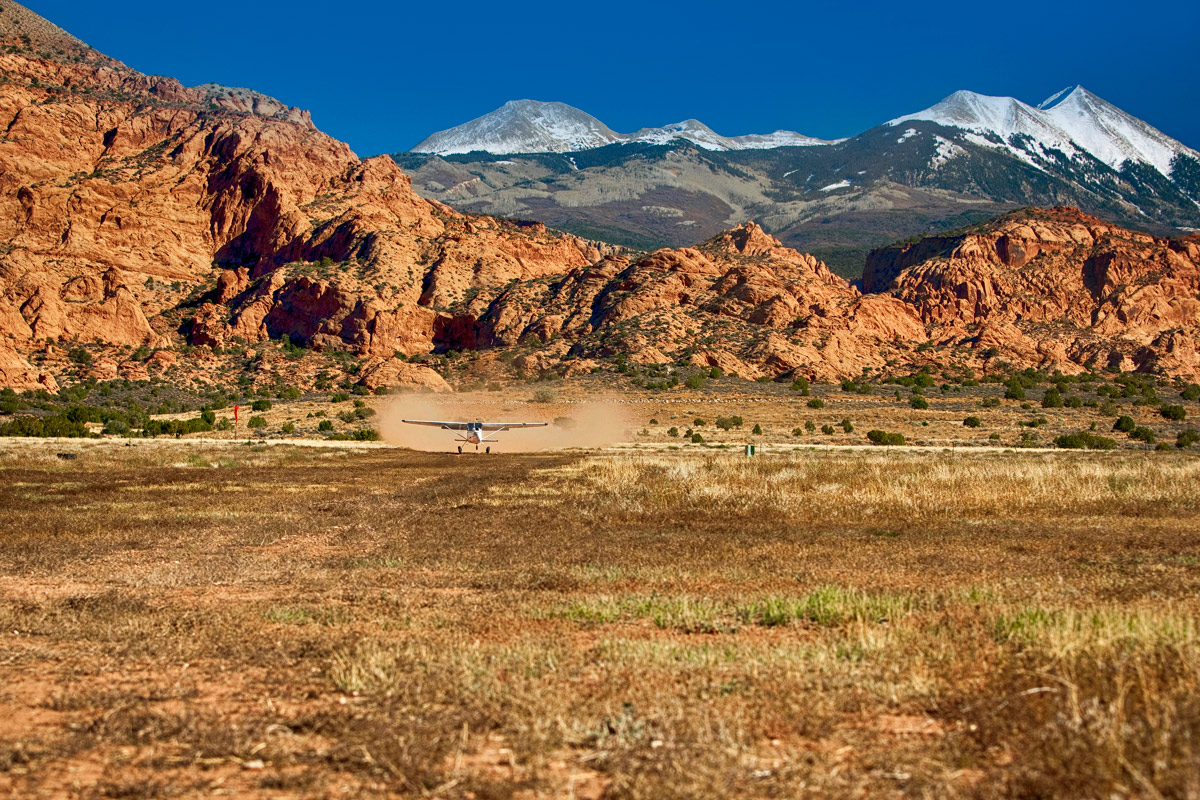 The snowy mountains and deep canyons of Moab, Utah, present a striking backdrop for the Cessna 185 Skywagon in this photo. But the businesslike Skywagon is entirely at home in this rugged part of the country. It’s a true bush airplane—one that will haul pilot, passengers, and camping gear, and has the necessary horsepower to hoist them out of higher-elevation airports. Introduced in 1961 as a follow-on to the Cessna 180, the 185 is a six-seat airplane that can be fitted with floats, amphibious floats, or skis. 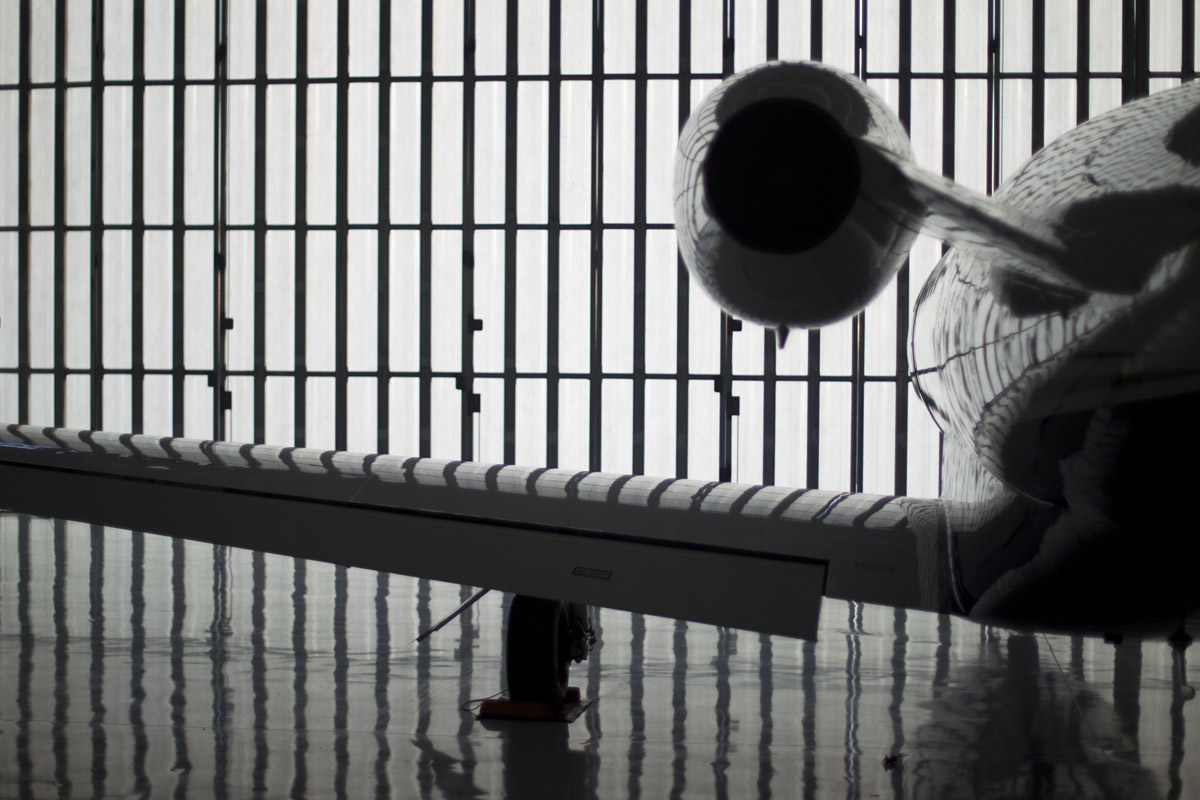 Cessna Aircraft Co. is well known as the manufacturer that launched thousands of student pilots behind the yokes of its popular 152 and 172 training airplanes. It also has a sophisticated line of small business jets, including the CitationJet 3 shown here. The CJ3 was certificated in 2004, and approximately 450 of them have been delivered since 2005. The CJ3 can cruise at 417 knots, and it has a range of 1,771 nautical miles. In 2014 Cessna introduced the CJ3+, featuring a new avionics suite and a redesigned cockpit, among other changes.