Can you afford not to pay your CFIs more?

Many flight training providers have been complaining that they can’t find and keep enough flight instructors. 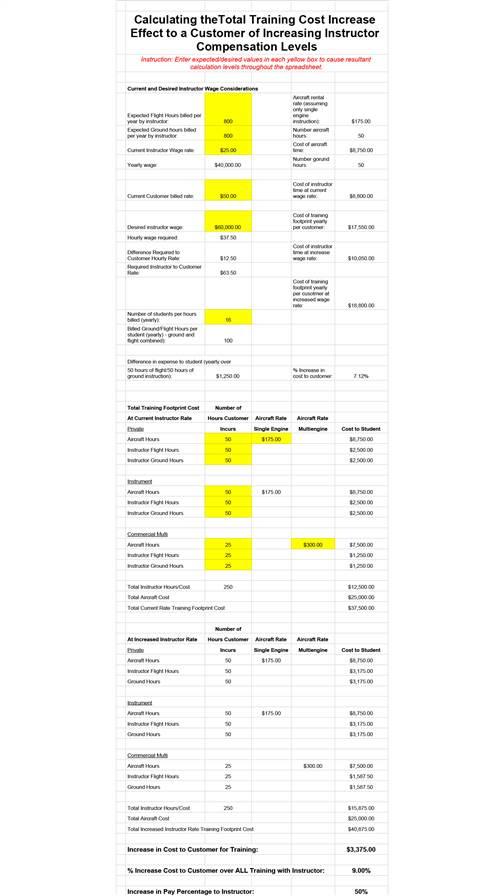 These complaints are not limited to the smaller providers, and it is not something that we can ignore, because it has real effects on the business of flight training. Flight schools that cannot attract and keep instructors are forced to incur repeated training expenses with instructor turnover, or limit their training classes based on instructor availability. This creates a constriction in the training pipeline for future pilots.

Instructor retention problems are rooted in active airline hiring at higher wages than historically experienced. The regional airlines are offering increased pay and incentives to recruit pilots that they desperately need. This has trickled down through the industry to CFI employment and is causing short-term service by CFIs who are being recruited to positions in the industry (mainly regional airline pilot positions) that offer higher pay and better benefits.

If we follow the logic that airlines can attract more pilots by offering better pay and incentives, the same will hold true of CFI employment. Increased pay will result in increased retention and decreased turnover of CFI positions at flight schools.

I want to clarify that “pay more” isn’t just a matter of more pure dollars, but also considering a total compensation package for an employee. Take-home pay is a part of this, but consideration must also be given to health care benefits, days off, a job that doesn’t require being gone for many days, no commuting to a job as many airline pilots do—these are all benefits that may convince a CFI to flight instruct as a career choice. Many flight instruction providers do not provide additional benefits other than hourly pay for hours worked. This is something I have seen in working CFI pay surveys over the past years with two different organizations: the National Association of Flight Instructors, and the Flight School Association of North America (see 2016 FSANA Flight Instructor Compensation Survey for more information). For the most part, flight training providers don’t treat CFI positions as career positions for which they develop compensation matrices that will attract and keep the best instructors.

When asked why they don’t, most business operators indicate that they can’t pay enough and remain competitive with their pricing. I think that is a short-sighted answer, and one that is being given from an uninformed position.

You may be thinking, “Sure, I’d love to give my instructors a raise, but I don’t see how that can be done without increasing the cost of flight training to an unsupportable level.” While increasing compensation may require an increase in the cost to the customer by a small percentage, instructor quality and efficiency of training will likely outweigh that increase. To get a better idea of how much of an increase might be required, I modeled what a $1 per hour increase in wages might represent for an instructor comparing a current wage and a desired yearly salary to conduct the same number of hours of training.

The result was a little surprising. The percentage increase on an exemplar training footprint with average instructor and aircraft pricing that is representative of what many flight training providers may experience resulted in an increase in the overall training cost to the customer, but one that with consideration of other factors may be mitigated and/or acceptable.

The graphic at right shows the example that I ran.

In this example, we find that a pure increase of wage for the instructor (with some basic assumptions of employee tax withholdings and similar concerns built into this calculation) increases the overall training footprint cost to the customer for something like a private/instrument/commercial/multiengine training footprint in a much smaller percentage than it does provide the effective increase in pay percentage to the instructor. This is based on the incremental effect of the direct hours of instructor time relative to the other factors included in the training footprint cost to the customer.

Now, I will qualify that this spreadsheet is certainly incomplete. It doesn’t include things such as medical benefits and paid leave, but a savvy flight training provider could expand the considerations of the sheet to more accurately develop a fully representative calculation. If your flight school has not done this, do it as soon as possible to get a better grasp on staffing costs relative to training pricing.

When considering the increase, and considering customers who are career focused, the pure dollars increase in the training footprint may be less relevant than one might think. Many customers don’t shop just on the “lowest cost” training they can receive. They consider things like training time it will take to accomplish their goals, whether financing is available, and success rates of the training provider’s customers. With proper marketing, these factors could allow a flight training business to attract customers and convince them to spend their money with a training provider that “sold” them training for $40,875 instead of $37,500, if it meant they were likely to have a higher success rate at completing the training with more qualified instructors who have a better pass rate.

Lower turnover means less cost of training (standardization) of instructors into the operation. Instructor turnover rates are currently running approximately nine months. Let’s consider a minimum of five hours of aircraft time (three in the single-engine and two in the multiengine aircraft) and a little time with a senior instructor (five hours with the single-engine and four with the multiengine aircraft) to bring a new instructor into a training operation. The training operator would incur a basic cost of $1,650 for each new instructor. That figure doesn’t take into account the loss of revenue or productivity, orientation, administration, drug testing, and staff time associated with recruiting new employees. These are very real costs to a business. Check out the Society of Human Resource Management’s article, “Placing Dollar Costs on Turnover,” to get a better feel for what turnover costs really mean to businesses.

With that in mind, the number I used in the turnover cost is a very minimal estimation. Many training operators have much more extensive requirements. The real cost is probably more like triple the number I cited above for the direct hard costs. Turnover is expensive. Most businesses have figured this out. Flight training has yet to recognize how expensive turnover really is and make the changes other more mature business environments have done to minimize their staffing costs. Perhaps it is time our industry grows up in that way.

Any changes will come with intended and unintended consequences. Paying CFIs more will certainly come with both. Some we can easily identify, such as a better compensation to the CFI employees, causing them to stay longer and provide more stable service to our customers. Others will be harder to identify or may not even be visible until major changes in the industry are made, and some may in fact have effects on other parts of the industry.

If the flight training industry takes to heart an effort to pay instructors more and try to keep CFIs in their employ for longer periods of time, it is likely to have the effect of finally creating a cadre of career-focused and dedicated instructors who will become a nexus of professional training. This can only improve the overall quality of training as these individuals gain more experience. The transient nature of flight instructing has historically limited the number of people who do this to largely those few senior staff and academic positions in the industry at collegiate/university/academy training providers.

I would be remiss if I didn’t mention one unintended consequence that I believe would also result, and would negatively affect (primarily regional) airline hiring efforts. If instructor positions become less transient and CFIs spend longer portions of their careers in these jobs, it will be less likely that the airlines can hire as many CFIs to fill their ranks. Even a small change in the turnover of CFIs to pilot hiring positions will have a great effect.

Turnover of CFI positions is in almost all cases now nearly a yearly occurrence. If a flight school could pay competitive wages that caused CFIs to work in their positions for longer periods of time, it would cause fewer overall numbers of pilots to be able to “get” CFI jobs and gain the necessary experience required to qualify for other pilot employment minimums (such as Part 121 airline service). There will certainly be pilots who do not wish to be CFIs as a permanent job, but some may choose to do so. If we imaged a few pilots, even 20 percent of them, willing to do this for maybe five years at a time before moving on, it would mean that instead of five instructors getting a job for a year, only one instructor would have that job for five years. This effectively blocks four instructors over that period who would have logged the 800 to 1,000 hours of flight time in a year needed to move on to fly at an airline. Instead, it gives one instructor something like 4,000 to 5,000 hours of total experience over the same period. This could mean that developing a well-paid, experienced, more stable cadre of instructors will reduce the potential positions that would be open for pilots who are seeking to gain necessary experience to work for airlines.

In some respects, this is a negative impact on the overall aviation industry, but from a business perspective, it may be the necessary change to ensure a flight school’s survival. It isn’t the job of flight training providers to be the experience building for pilots; it is their job to provide the training to accomplish certificates and ratings that are needed.

The goal of a flight training provider should be to pay a wage with sufficient benefits to their CFI staff that will make them actively decide not to take a job at another type of pilot position such as a part 121 carrier or corporate/private aircraft pilotage. When this is accomplished, the flight training providers will achieve stable employee retention, reduce turnover/standardization costs in their employees, and develop more experienced CFIs that will reduce failure rates and training time footprints for their customers. The result may be a reduction in costs in some large-scale training provider environments.

If you want to see what this basic model would look like for your flight training business, click here for an interactive spreadsheet.