Get the app Get the app
Get the latest news on coronavirus impacts on general aviation, including what AOPA is doing to protect GA, event cancellations, advice for pilots to protect themselves, and more. Read More
Already a member? Please login below for an enhanced experience. Not a member? Join today
Pilot Resources Aircraft & Ownership Aircraft Fact Sheets Beechcraft Baron 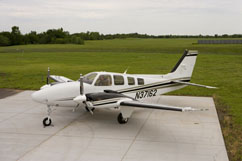 These days light twins can be had for very competitive prices. High fuel and insurance costs are a big reason for the relatively low purchase prices in this class of airplane. Like the oft-bashed sport-utility vehicle on the highway, light twins are hardly pictures of efficiency compared to heavy singles. But if you routinely carry a decent load of people, bags, and fuel the light twin may be the best airplane for you. Beechcraft's Baron line of light twins has been one of the mainstays of this category for more than 40 years.

Similar to the Beech Bonanza but with one more engine, the Baron comes in two sizes. The Baron 58 is the "long" version, and the 55 is the "short." Beechcraft's Model 95-55 Baron was introduced in 1961, and it was basically a modified Model 95 Travel Air that had a swept tail and redesigned nacelles covering new 260-horsepower Continental IO-470 engines. The Baron tacked another 15 knots of speed onto the Travel Air at a penalty of about 5 gallons per hour. You can count on 180 to 185 knots true airspeed on 24 gallons per hour at typical rich-of-peak power settings at 7,000 to 11,000 feet.

Beechcraft’s basic-model Baron 58 is the last piston twin still built and one of only four piston models still made by Beech. Born in 1969, the Baron 58 increased the Baron 55’s cabin length by two feet, creating a six-seat "conference"-style cabin arrangement, and adding 50 horsepower. The Baron also uses the Bonanza’s dual cargo/entry doors on the aft right side. The Baron 58 has greater carrying ability, speed, and gross weight, but climb rate remains the same. Later versions of the 58 included more horsepower, turbocharging (Model 58TC), and pressurization (Model 58P). The Model 58TC and 58P were introduced in 1976 and produced until the mid-1980s. In 1984, both engine and panel were changed; the new compact panel resembles the King Air panel, with twin vertical engine instruments. All Barons were originally equipped with 520-cubic-inch Continental engines, but the normally aspirated Baron switched to the Continental IO-550-C in 1984.

In the 44 years since the Baron line was introduced, Beechcraft spun off many different versions of the basic Model 55 and Model 58 airframes. It can be difficult for the average Joe to tell the difference in the many types. The original 95-55, A55, and B55 models have become known as the "baby Barons" and are easily distinguished by their lack of air scoops on top of the nacelles. Sharper eyes may notice the shorter nose and smaller-span horizontal stabilizer as further evidence. Of the Model 55s, the B55 was by far the most popular, with a total of nearly 2,000 units delivered in both civilian and military (T-42) variants.

Five seats were available in the earliest Barons, with six becoming the norm by 1962 with the introduction of the A55. Over the years, maximum takeoff weight (MTOW) increased incrementally. When the B55 was introduced in 1964 MTOW went from 4,880 pounds to an even 5,000. In 1966, MTOW went up to 5,100 pounds. Useful load is respectable, especially in older models. Typical useful loads are in the range of 1,500 to 2,000 pounds, depending on age and equipment. Older airframes with no deice boots, radar, or well-stocked panel can easily accommodate a family of six, full fuel, and baggage on a four-hour flight with reserves. However, many owners consider the aft-most seats unsuitable for adult humans and remove one or both of them, leaving the cavernous rear compartment open for ungainly cargo. Think of it as a luxurious four-seater that can do six, if needed.

One reason Model 55s are popular for families is the fact that they are significantly less expensive than the slightly larger Model 58, which is still in production. The 58's huge double-door access is far more attractive to charter operators and cargo haulers and commands a significant premium over same-year Model 55s. In the passenger-carrying mode, the 58 offers the option of a club-seating arrangement better suited to business travelers. Riders simply step right into the cabin — no walking on the wing and no limbolike maneuvers through a small baggage door as required with a 55. Asking your kids to enter the airplane through a baggage door is no big deal. But imagine asking a paying charter passenger to do such a thing and you can see why the 58 makes a better charter airplane. If the airplane is to be used primarily for your family, pocket the $30,000-$50,000 difference and go for the 55.

Although Barons are certified in the Normal category, they are stressed to or beyond Utility category limits, bringing often-unseen advantages to prospective buyers. Besides added strength and integrity, the "overbuilding" gives the Baron a relatively high turbulent-air-penetration speed. of 156 knots at max weight. Flight load (G) limits for the B55 are 4.4 positive Gs and 3.0 negative Gs, making it quite stout for a light twin.

This airplane is a normal category airplane. Acrobatic maneuvers, including spins are prohibited. It is approved for day/night VFR and IFR when properly equipped.

Ice protection equipment, which may be installed on this airplane has not been demonstrated to meet requirements for flight into known icing conditions.

Control surfaces are bearing supported and operated through push-pull rods and conventional cable systems terminating in bell cranks. The throw-over type control column for elevator and aileron control can be placed in front of either front seat. The right set of rudder pedals can be placed against the floor when not in use. Aileron and elevator trim is available. Rudder trim is only available on the 58 model.

Spring-loaded linkage from the nose gear to the adjustable rudder pedals allows for nose wheel steering. The landing gear may be electrically retracted and extended, and may be extended manually.

The standard wing fuel system has a capacity of 142 gallons for the 58 model and 106 gallons for the 95-B55 model. Optional higher capacity systems are available. When installed, a visual fuel level sight gage in each wing leading edge can be used for partial filling. A vapor return line returns excess fuel from the engine to its respective wing system. Fuel quantity is measured by float type transmitter units, which transmit the common level indication to a single indicator. The fuel lines for the engines are interconnected by crossfeed lines. During normal operation each engine uses its own fuel pumps to draw fuel from its respective wing fuel system. However, on emergency crossfeed operations either engine can consume the available fuel from the opposite side. An individual two-speed electric auxiliary fuel pump is provided for each engine.