Get the app Get the app
Already a member? Please login below for an enhanced experience. Not a member? Join today
Pilot Resources Aircraft & Ownership Aircraft Fact Sheets Cessna 182 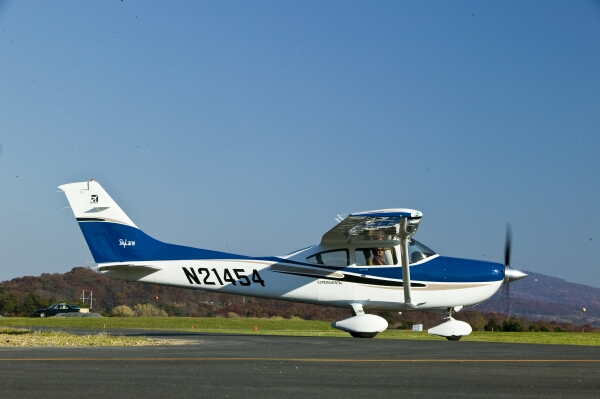 The 182 is an all metal, four seat, high wing, single engine airplane equipped with tricycle landing gear, having a steerable nose wheel and two main wheels.

This airplane is certificated in the normal category. Spins and aerobatic maneuvers are not permitted in normal category airplanes. The aircraft is equipped for day and night VFR/IFR.

The airplane is powered by a horizontally opposed, six cylinder, overhead valve, air cooled, fuel injected engine with a wet sump lubrication system. The engine is a Lycoming Model IO-540-AB1A5 and is rated at 230 horsepower at 2400 RPM. Major accessories include a starter and belt driven alternator, dual magnetos, vacuum pump, and a full flow oil filter. Engine output is controlled through the throttle and propeller control.

Fuel flows by gravity from the two wing tanks through the fuel manifold, and to a four-position selector valve. From there, fuel flows through the auxiliary fuel pump, the fuel strainer and to the engine driven fuel pump. A portion of the fuel is returned to the wing tank selected through use of the fuel return system.

The airplane has a 28-volt direct current system powered by a 60-amp alternator and a 24-volt battery. Power is supplied to most electrical circuits through two primary busses, with an essential bus and a crossfeed bus connected between the two primary busses to support electrical equipment. The two primaries are also connected to an avionics bus through a circuit breaker. The circuit breakers are of the push to reset type.