Get the app Get the app
Get the latest news on coronavirus impacts on general aviation, including what AOPA is doing to protect GA, event cancellations, advice for pilots to protect themselves, and more. Read More
Already a member? Please login below for an enhanced experience. Not a member? Join today
Pilot Resources Aircraft & Ownership Aircraft Fact Sheets Cirrus SR22 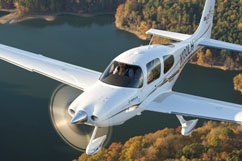 SR22- Handling and Performance
To go faster or farther than a similarly shaped airplane, yours must either be smaller or it must have more power. Period. With that in mind, it is no wonder that the Cirrus SR22, with its 310-horsepower engine, outperforms its 200-hp little brother, the SR20, in every way. Horsepower is an amazing thing, and in this case it transforms the perky Cirrus into a real get-up-and-go traveling machine.

At cruise settings, the horsepower also makes a difference. The increase from the SR20's 160-knot cruise speed at 75-percent power to the SR22's 181 knots is impressive, but you might ask whether the additional fuel burn is worth it. If your budget can stand it, yes, it is worth it for those who plan to travel long distances. Even if you're not flying in the shadow of the Rocky Mountains, the excess horsepower available for improved climb is something you can use to your advantage on every flight. Getting to altitude more quickly and to higher altitudes altogether allow you to fly more efficiently.

The SR22 also carries a longer wing, about three feet longer. The greater span improves the climb rate, decreases stall speed, and gives the SR22 really nice landing characteristics. I found the SR22 to be easier to land than the SR20, partly because it seems more stable on approach, but mostly because the larger wing provides more opportunity in ground effect to finesse the landing.

The SR22 maintains the unusual leading-edge cuff on the outboard sections of the wing that debuted on the SR20. The cuff helps direct the airflow over the ailerons at high angles of attack, allowing the pilot to maintain roll control with the ailerons at very slow speeds. The devices make the Cirrus airplanes docile in stalls and virtually impossible to spin. Cirrus test flights show that both airplanes behave conventionally in spins, but, like most high-performance airplanes, neither is approved for the maneuver.

The Cirrus SR22 is a four-place, low wing, single-engine monoplane with fixed landing gear. The aircraft is constructed of primarily composite materials.
This airplane is certificated in the normal category. In the normal category all aerobatic maneuvers are prohibited. The aircraft is approved for day and night VFR/IFR when equipped in accordance with F.A.R. 91 or F.A.R. 135.

The engine is a Continental Model IO-550-N and is rated at 310 hp at 2700 RPM. It is a six cylinder direct drive, normally aspirated, air-cooled, horizontally opposed, fuel injected engine.

A 81-gallon usable wet-wing fuel storage system provides fuel for engine operation. The system consists of vented integral fuel tanks and a fuel collector/sump in each wing, a three-position selector valve, an electric boost pump, and an engine-driven fuel pump. Fuel is gravity fed from each tank to the associated collector sumps where the engine-driven fuel pump draws fuel through a filter and selector valve to pressure feed the engine fuel injection system. The electric boost pump is provided for engine priming and vapor suppression.