Get the app Get the app
Get the latest news on coronavirus impacts on general aviation, including what AOPA is doing to protect GA, event cancellations, advice for pilots to protect themselves, and more. Read More
Already a member? Please login below for an enhanced experience. Not a member? Join today
Pilot Resources Aircraft & Ownership Aircraft Fact Sheets Diamond DA20 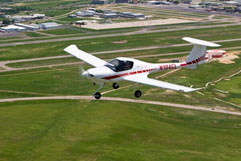 Appearances are deceiving. In the world of automobile design, for example, it's common to introduce a supposedly fresh model that is really a new body atop the old platform — giving what seems to be a clean-sheet design that in fact shares engine, suspension, and other major components with the outgoing version. It's a time-honored way to add sizzle to a well-aged steak.

But just the opposite is true regarding Diamond Aircraft's latest version of the two-place Katana trainer, the DA20-C1. It's grown the C1 suffix as a result of a 125-horsepower Continental IO-240-B under the cowling that drives a fixed-pitch propeller. Even when you know that fact, a casual examination of the C1 barely discloses the differences from its predecessor, the Rotax-powered A1. A wasp-waisted empennage still draws the eye, as do the bubble canopy; sailplane-like T-tail; and long, graceful wing. You could check out the airplane on the ramp and conclude that only the cowling and prop have changed in response to the new engine.

That's hardly the case. Diamond's C1 is a significantly new airplane — with differences that start right at the propeller but certainly don't end at the fire wall. When Diamond certified the A1 Katana in 1994 with the 80-horsepower Rotax 912, mechanics from Presque Isle to Imperial Beach could be heard complaining about this unfamiliar engine that didn't even have a proper magneto. Early predictions of a short-lived engine have come to naught; in fact, the Rotax has had a good service record in the Katana, routinely making the 1,200-hour TBO in typical fly-it-often primary training. Rotax apparently also had poor after-sale support, which left Diamond to pick up the slack. In a way it's easy to understand; Rotax has mainly supplied the experimental market and is a big player in the motorcycle and watercraft fields. Aviation is a comparatively small part of the business.

Taken as a whole, these events have caused Diamond to look carefully at the future of the DA line and conclude that the Rotax's day is, for now, over. Alongside the C1 prototypes and early production models on the line are the last A1s to go out the door; during our April visit, the final A1 (serial number 343) was nearing completion.

While Diamond anticipates better support from Continental, pilots and instructors can look forward to a better-performing Katana. Even with a higher maximum gross weight — 1,654 pounds, the limit under JAR-VLA regs and 45 pounds more than the A1 — the C1 tromps the older airplane in all performance categories. Maximum stated cruise speed is up to 135 knots, and the sea-level rate of climb is now 1,105 fpm — big jumps over the A1's 117-knot cruise and 680-fpm climb rate.

Included as standard are full instruments (now with pneumatic attitude and directional gyro in lieu of the A1's all-electric ensemble), dual brakes, and a host of smaller items that make the airplane remarkably complete in the fly-away package.

Avionics are part of the base price, too. They include an AlliedSignal Bendix/King KX 125 nav/com, KLX 35A GPS with moving map, KT 76A transponder, PS Engineering PM501 intercom, and blind altitude encoder. Avionics option packages can take the Katana up to a KX 165 nav/com with glideslope, KLX 135A GPS/com, and KMA 24 audio panel with marker beacon. Remember, though, that the airplane is still not legal for IFR flight, in part because it's not lightning hardened. Instrument training can take place under VFR conditions, however.

In order to accommodate the extra 70 pounds of the IO-240, Diamond's engineers went on a quest both to balance the heavier engine and to draw nonstructural weight out of the airframe. The Katana's battery now lives behind the baggage bay, for example, to help move the empty cg aft, and the wing sweep has been changed from 1 degree aft to just 0.5 degrees back to shift the center of lift forward. Previous Katanas had simple hinged flaps — but at the higher maximum weight, more sophisticated slotted flaps were necessary to bring the stall speed to the JAR-VLA-specified 45 knots.

A revised tail section is also part of the C1 transformation. Gone are the anti-servo tabs — often mistaken for trim tabs — and their associated hardware. A stronger spring pack provides longitudinal trim; the electric servo driving this setup is now mounted on the aft side of the vertical stabilizer's main spar, for better accessibility. Horizontal stabilizer and elevator area are both up by 10 percent, and the stabilizer's incidence is increased slightly.

Inside the Katana's side-by-side cockpit are a host of modifications as well. The all-metal instrument panel — introduced as the Canadian-built DA20s came on line in 1995 — has been rearranged and moved forward and up by a couple of inches. This frees some legroom while maintaining the same overall panel size. As before, the engine instruments are grouped to the right of the radio stack — although the large tach is now among the primary flight instruments — and the electrical switches are repositioned to minimize hand-changing from the stick for critical items like the fuel pump or master switch. The guarded preselect flap switch has been shifted over slightly to keep from fouling the knees of long-legged pilots.

In the center console, you'll find that the prop and carb-heat levers have been supplanted by mixture and alternate-air controls, and that the climate-control panel has been simplified. As a carrot for northern operators, Diamond has given the C1 a heater/defroster system with much more capacity. The electric pitch trim switch resides behind the throttle/mixture levers; a lot of pilots would probably prefer that this control be repeated on the stick.

New in the C1 are revised seating arrangements, too. Where the old fixed backrests were essentially straight from the shoulder to the floor, the new ones have a slight cutout that is said to make the position more comfortable for the long haul. The previous setup didn't seem particularly trying, so it's hard to say whether the C1's will be an improvement.

In spite of having made comprehensive changes to the engine, airframe, control system, and ergonomics, the C1 Katana flies pretty much like, well, a Katana. Ground steering by differential braking is familiar, and now the brakes seem more powerful and responsive as well. Diamond is experimenting with a number of different nosewheel friction settings to minimize brake use during taxi. One complaint remains from the older Katana, though — the rudder pedals are squeezed into a rather small footbox, so pilots with double-digit shoe sizes will want more room. The adjustable rudder pedal setup has been improved with a more positive locking latch.

On the runway, the C1's extra power is immediately evident. The C1 accelerates to the 55-knot rotation speed briskly, even with the cruise-oriented prop out front. Once airborne — the departure still benefits from use of the recommended 15-degree takeoff flap setting — the C1 really gets down to business. At 80 knots indicated, about 5 knots above the best-rate climb speed, we saw a steady 1,000 fpm from 1,000 feet msl, 800 fpm through 3,500 feet, and 500 fpm climbing through 5,000 feet; fuel flow is about 8.5 gph. In cool Canadian springtime weather, the Continental was, if anything, slightly overcooled; the cylinder-head temperature never even got into the lower portion of the green arc during the climb.

Cruise performance is also noteworthy — although many flight schools won't much care. At a density altitude of 7,000 feet, with the engine turning over 2,700 rpm and consuming 7.7 gph, the C1 indicated 130 knots, for a true airspeed of 144 knots. These figures were obtained in the prototype airplane with the Hoffmann propeller and flight-test instrumentation, which is assumed to be reasonably accurate. Pulled back to a more reasonable 2,500 rpm, the C1 still indicated 119 knots on 7 gph, for a true airspeed of 132 knots.

Generally, the IO-240 is well-behaved in flight, but the fuel-injection system is likely to give beginning pilots reason for head scratching. Unlike a carburetor — or even the Bendix-style injection system used on the new Cessnas — Continental's injection setup bases fuel flow on throttle position and engine speed. Originally designed to be used with constant-speed props, the TCM setup occasionally operates counterintuitively with a fixed-pitch prop. For example, if you lean the mixture for high cruise conditions, and then change the throttle position to obtain a lower-speed cruise, it's likely that you will have to enrich the mixture to maintain the same reference to peak EGT. More commonly this adjustment would call for a further leaning of the mixture at the lower power setting.

Handling qualities have been influenced by the change to the Continental engine, too. With greater longitudinal stability and higher stick forces in pitch, the controls are now better harmonized; we complained of heavy roll forces in the Rotax airplane. Now the Katana's roll forces are about the same, but far less objectionable because of the improved balance. Compared to the other axes, the rudder feels stiff and uncommunicative; and, with the more powerful engine, you'll be using more of the rudder during takeoff and climb. The airplane is, nonetheless, easy to keep in coordinated flight.

Slow flight and stalls — two flight regimes the Katana will no doubt see plenty of — show a good compromise between being too benign to teach anything and too sharp for neophyte pilots. The T-tail remains responsive throughout all normal slow flight, and the stall comes with so much aerodynamic warning that you'd have to be fast asleep to miss impending loss of lift. It stalls straight ahead with little fuss, amazing when you consider that the wing has no washout at all save for the upswept tips. The Katana is approved for spins.

It's clear that Diamond has listened to the schools and made worthwhile changes to improve utility and reliability. The move to a conventional aircraft engine should only drive the Katana further into the training mainstream. How the comparatively beefy Continental fares in the dog-eat-dog world of flight training remains to be seen. But with more than 300 airplanes flying in the United States and Canada, Diamond's designers think they know how to build a better trainer; the C1 is the embodiment of this hard-won experience.
Diamond Katana: Continental Education
Marc E. Cook, AOPA Pilot, June 1998

The airplane is powered by a horizontally opposed, four cylinder, direct drive, normally aspirated, air cooled, fuel injected engine. The engine is a Continental Model IO-240-B and is rated at 125 horsepower.

The aluminum fuel tank is located behind the seats, below the baggage compartment. The tank filler on the left side of the fuselage behind the canopy is connected to the tank with a rubber hose. The tanks vent line runs from the filler neck through the fuselage bottom skin to the exterior of the airplane. The tank has an integral sump which must be drained prior to each flight. Two outlets with finger filters, one left and one right, are installed at the bottom of the tank. Fuel is gravity fed from these outlets to a filter bowl and then to the electric fuel pump. The filter bowl must also be drained prior to each flight. The electric fuel pump primes the engine for engine starting and is used for low throttle operations. Some aircraft also have a fuel vapor separator in the distribution manifold. These aircraft have a second vapor return line from the distribution manifold to the firewall.