Get the app Get the app
Get the latest news on coronavirus impacts on general aviation, including what AOPA is doing to protect GA, event cancellations, advice for pilots to protect themselves, and more. Read More
Already a member? Please login below for an enhanced experience. Not a member? Join today
Pilot Resources Aircraft & Ownership Aircraft Fact Sheets Piper Archer 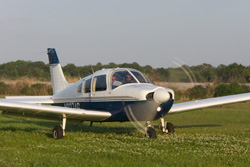 Archers, which were simply renamed Cherokee 180s, debuted in 1974, and made their entry wearing the old Hershey Bar wings. They differed from the Warrior not just in the horsepower department, but also in size. In 1973 the airplane was given a five-inch fuselage stretch; a bigger door, cabin, and stabilator area; a new version of the O-360; a 50-pound gross weight increase; and an instrument panel redesign. Like the Warrior, airplanes in the 1974 model year were first called Challengers.

In 1976 the wing planform was tapered and the aircraft were renamed Archer IIs. Archer manuals proclaim maximum cruise speeds in the 125-kt range at 75-percent power — about the same as the Warrior II's — but Archers have maximum gross weights 225 pounds greater.

Let's just say this up front: Archers aren't speed demons. Realistically, you'll get maximum true airspeeds of 120 kt or so from an Archer. Fuel burns at these settings will be approximately 10.5 gph. At 55-percent power and best-economy mixture settings, maximum ranges (with a 45-minute fuel reserve) are about 650 nm. Of course, if you fly at those power settings you'll lop 15 to 20 kt off your maximum cruise speed potential. At 75-percent power and optimum altitudes, ranges drop to 550 nm or so.

Useful loads vary with each airplane, of course, but Piper and The New Piper give maximum useful load figures of approximately 980 pounds for the Archer. Consequently, payloads with full fuel run about 700 to 800 pounds — not bad. Fill the tanks to the tabs (the 17-gallon mark in each wing tank) and your useful load jumps to approximately 775 to 886 pounds. Enough to take a spouse and kids on a 300-nm trip, say.

The Archers are tame, docile creatures with unremarkable handling characteristics. The stall is almost a nonevent, and these airplanes take a lot of provoking to spin. Many pilots feel that Archers are easy airplanes to consistently land well. They handle crosswinds with minimal fuss and minimal footwork, and make you look good in front of passengers and airport gawkers alike.

The airplane is a four-place, low wing, single engine airplane equipped with fixed tricycle landing gear, having a steerable nose wheel and two main wheels. The basic airframe, except for a tubular steel engine mount, steel landing gear struts, and other miscellaneous parts is of aluminum alloy construction.
This airplane is certificated in the normal and utility category. In the normal category all aerobatic maneuvers including spins are prohibited. In the utility category certain maneuvers as per the aircraft’s POH are permitted. The aircraft is approved for day and night VFR/IFR when equipped in accordance with F.A.R. 91 or F.A.R. 135.

The engine is a Lycoming Model O-360-A4A and is rated at 180 horsepower at 2700 RPM. It is a four-cylinder, normally aspirated, direct drive, air-cooled, horizontally opposed, carburetor equipped engine. Major accessories include a starter at 60-amps, 14-volt alternator, a shielded ignition, vacuum pump drive, fuel pump, and a dry, automotive type carburetor air filter.

The electrical system includes a 14-volt, 60-amp alternator, a 12-volt battery, a voltage regulator, an overvoltage relay and a master switch relay.