Get the app Get the app
Already a member? Please login below for an enhanced experience. Not a member? Join today
Pilot Resources Aircraft & Ownership Aircraft Fact Sheets Piper Arrow 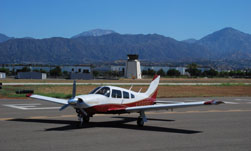 Decades later, and more than 6,000 units after the Piper Arrow was introduced, it is still in Piper’s new-product lineup. The Arrow may be a good choice for a pilot with little complex aircraft experience or one who does not fly often. It was designed to be an easy step up for pilots transitioning from a trainer to a single with retractable landing gear and controllable-pitch propeller. The primary reason is that the Arrow is a simple retractable to fly. It has the same predictable handling as the Cherokee line of singles in which many pilots have learned to fly, but it's a little faster and sexier, thanks to its retractable gear. The Arrow has just enough power to keep the scenery going by at a satisfying pace, yet not enough to get you into trouble.

The Arrow’s most unique feature is the automatic gear. Piper anticipated that most of the people who would be flying Arrows would have little or no experience in retractables. To ease their transition into complex aircraft, Piper designed a system that, operated properly, makes it extremely difficult to land wheels-up. The mechanism prevents the gear from being retracted on takeoff until a safe climb speed is reached and automatically lowers the gear when power and airspeed are reduced below a certain point.

Sorting through the plethora of changes in the Arrow models to find the one with the best combination of performance, comfort and price is enough to confuse the most determined shopper. The Arrow has undergone a long evolution, but there have been four improvements that have had the most significant effects on performance, utility and comfort: The introduction of a 200-horsepower model in 1969, a five inch stretch of the fuselage in 1972, 77 gallon tanks in 1977 and the introduction of a turbocharged model that year. Piper also increased the wingspan, enlarged the stabilator, dressed up the interior, changed the wing planform and introduced a T-tail model.

Most structures are of aluminum alloy. The airplane is a four-place, low wing, single engine airplane equipped with retractable tricycle landing gear, having a steerable nose wheel and two main wheels.

Fuel is stored in two 38.5 gallon tanks, one in each wing. Each tank is equipped with a filler neck indicator tab to aid in determining fuel remaining when the tanks are not full. The tanks are attached to the leading edge of the wing with screws and are an integral part of the wing structure. An electric fuel pump serves as a back-up feature. Fuel quantity and pressure are indicated on gauges located in the engine gauge cluster on the instrument panel.

The primary electrical power source is a 14-volt, 60-amp alternator, which is protected by an alternator control unit that incorporates a voltage regulator and an overvoltage relay. Secondary power is provided by a 12-volt, 35-ampere hour battery.