Get the app Get the app
Get the latest news on coronavirus impacts on general aviation, including what AOPA is doing to protect GA, event cancellations, advice for pilots to protect themselves, and more. Read More
Already a member? Please login below for an enhanced experience. Not a member? Join today
Pilot Resources Aircraft & Ownership Aircraft Fact Sheets Piper Seneca 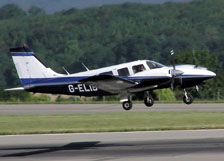 These days, conventional wisdom holds that the market for new piston twins is all but finished — a tiny and shrinking slice on the pie chart of annual general aviation sales. Can it really be that we're watching the twilight of the multis, that their glory years are gone for good, that turbine singles and next-generation mini-fanjets will finish them off completely?

Yes and no. True, the market for twin-engine piston aircraft is comparatively small. But that's always been the case, even from the mid-1950s through the late 1970s. If piston singles rolled out factory doors by the thousands each year back then, piston twins were built by the hundreds. So it's a matter of scale: Piston twins represent a small chunk of the total market, and that market is certainly smaller today than it was 40 years ago.

But today, if the trends realized at The New Piper Aircraft Inc. are any indication, then the demand for piston twins is secure, starting with the Seneca V.  Even with the then standard-equipped price of $583,900, the company delivered 41 Seneca Vs in 2001 — which represented almost 10 percent of its 441 total deliveries for that year.  The following year, New Piper planned to sell 37 Seneca Vs, with most buyers going for options that pushed prices close to $690,000.

Who buys new Seneca Vs? Chris Layson, president of Northern Air, a Grand Rapids, Michigan-based New Piper dealership, says that the typical Seneca V buyer has owned a New Piper Saratoga II for two to three years, although some "come right out of an Archer, just to build multiengine time." For this reason, Layson schedules demonstration flights in Seneca Vs after his Archer and Saratoga buyers pass the two-year mark.

John Lowe, president of Des Moines Flying Service — the oldest Piper dealership in the nation — says that the optional known-icing package is an important draw. "It's a good winter airplane, it can get in and out of 2,700- to 3,000-foot strips easily, it has an excellent single-engine service ceiling, and the turbos give it good performance at high density altitudes," he says. Most of Lowe's Seneca Vs are sold to small- to medium-size companies and serve in corporate fleets. They provide transportation on shorter trips, or swing into action when the company jet is unavailable.

Layson echoes the known-icing draw. "It's not so much that it's got a second engine — though that's a big factor for those who spend a lot of time crossing the Great Lakes — it's that the airplane can get in and out of Michigan and the other states up north in the winter."

New Piper officials point out another reason why some owners are drawn to the Seneca V. Some pilots would like to buy New Piper's turboprop single, the Meridian, but can't meet insurance prerequisites for flying a turbine-powered airplane as pilot in command. The desire for certification for flight into known-icing conditions seals the deal.

Although the Seneca V is based on a 1972 design — the Seneca I — it's the beneficiary of refinements made over the years. The first Senecas came with 200-horsepower Lycoming IO-360 engines. In 1975 the Seneca II offered 200-hp turbocharged Continental engines. The Seneca III came with a 28-volt electrical system, one-piece windshield, Continental TSIO-360 engines of 220 hp, three-blade propellers, and a redesigned Royalite-free instrument panel. The Seneca IV added high-end instrument options, a deicing package, a leather interior, and optional air conditioning. The V came out in 1997 and brought intercooling to the turbocharged Continentals.

The 2002 Seneca V flown for this article was decked out with popular options: copilot instruments; Honeywell Bendix/King RDR 2000 vertical profile weather radar; air conditioning; yaw damper; and the known-icing package. It's interesting to note that New Piper won't sell you ice-protection equipment piecemeal. You either buy the full, approved FIKI (flight into known icing) package or nothing at all. This includes pneumatic leading-edge deice boots, electric windshield and propeller heating elements, electrically heated pitot-static probes and stall warning vanes, plus an ice light for illuminating the left wing leading edge to check for ice buildups when flying at night.

The system is effective, but like any ice-protection system it is not designed to take on he worst icing conditions, or to let you mill around in ice-laden clouds for indefinite periods of time. The system merely allows you some extra time to escape icing should it be encountered.

If you want even more large-display acreage, then you can order up what New Piper calls the Situational Awareness Package — which was also aboard our demonstration airplane. This adds a Goodrich WX-500 Stormscope and Goodrich SkyWatch traffic advisory system, plus Avidyne's FlightMax 750 Flight Situation Display (FSD). Moving map, lightning, aeronautical charts, radar imagery, and Stormscope returns can all play on the FSD's large color display.  The Stormscope and SkyWatch option can be bought independent of the Avidyne FSD and play on the Garmin 530 instead.

Fly a Seneca V and you'll quickly understand why Archer and Saratoga pilots make smooth transitions. The control feel is very much like that of a Saratoga — kind of trucky, what you'd expect from a 4,750-pound airplane — and so are the target airspeeds used in the pattern. On short final, the Seneca V can be flown as slow as 82 knots and yes, the airplane is easy to land.

Setting power is no sweat, thanks to the V's automatic wastegates. You simply throttle up to the manifold pressure you want, and the wastegates hold that value as you climb to the critical altitude — the altitude where the wastegates are closed and power output begins to drop off, approximately 19,000 feet according to New Piper. Even so, the V's Rajay turbochargers let you cruise as high as 25,000 feet — but up there you'll need the built-in oxygen system option.

The Seneca is also sometimes used as a trainer, but the new airplane with it’s sophisticated and comfortable interior, and take-me-anywhere panel seems to be more of a traveling machine. The turbochargers provide the get-up-and-go to at least top some of the weather in the lower flight levels and the deicing system makes winter flying a whole lot more practical.

The introduction of the Seneca V is just one just more example of Piper's ability to identify market potential for its designs and then implement a program of systematic improvements to attract new buyers. The scrappy team from Florida refuses to quit and from it we can expect much more in the coming years.

The aircraft is powered by a Lycoming IO-360-C1E6 and a LIO-360-C1E6, rated at 200 horsepower each. Both are four cylinder, normally aspirated, direct drive, air cooled, horizontally opposed, fuel injected engines.

Two 25-gallon aluminum tanks in each wing are interconnected to eliminate problems of tank selection and to simplify fuel management. Both tanks in each wing are filled from a single opening in the outboard tank, and fuel from the outboard tank flows into the inboard tank as the fuel from the inboard tank is consumed. In normal operation, each engine operates with an independent fuel system, drawing fuel from the tanks in the wing on the same side as the engine. However, the two systems are interconnected by crossfeed lines which will permit an engine to use fuel from the tanks on the opposite side in order to extend single-engine range and to enable the pilot to keep fuel weight balanced. An engine driven fuel pump is the primary means of supplying fuel for each engine. In case of failure, there is an auxiliary fuel pump installed. To permit the pilot to monitor the system, fuel pressure, fuel flow, and fuel quantity gauges are mounted on the instrument panel.

Electrical power is supplied by two 60 ampere alternators, one mounted on each engine. A 35 ampere-hour, 12-volt battery provides current for starting, for use when the engines are not running, and for a source of stored electrical power to back up alternator output. An overvoltage relay in each alternator circuit prevents damage to electrical and avionics equipment.