Get the app Get the app
We will be performing maintenance on our systems Sunday, 8/21, beginning at 12:00 A.M. ET and ending at 6:00 A.M. ET. During this time, you may experience intermittent service outages. We appreciate your patience.
Pilot Resources Medical Resources Medications Database

AOPA offers a list of FAA allowed/disallowed medications for pilots who hold FAA-issued medical certificates. Under BasicMed, your physician will discuss the medications you are taking and their potential to interfere with the safe operation of an aircraft. Please read more below. 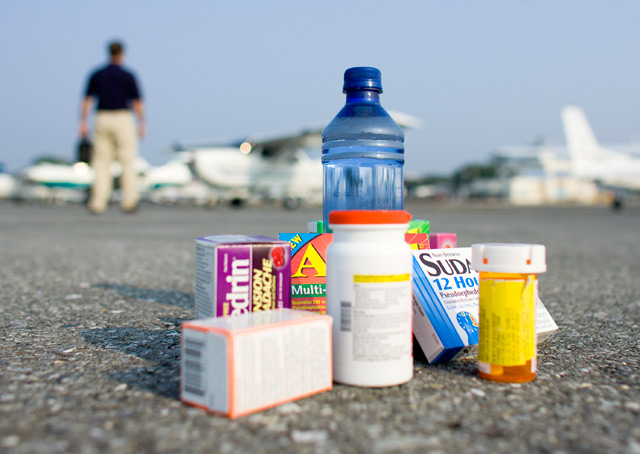 The Federal Aviation Regulations include no specific references to medication usage. FAR 61.53 prohibits acting as pilot-in-command or in any other capacity as a required pilot flight crewmember, while that person:

Further, FAR 91.17 prohibits the use of "any drug that affects the persons faculties in any way contrary to safety."

However, there is no official FAA "list" of drugs that is available to the public. Because FAR 91.17 doesn't include the names of the prohibited drugs, there is no requirement that the drugs being taken be made known to the FAA prior to completing an FAA airman medical application and physical examination. There are several thousand controlled prescription drugs currently approved by the U.S. Food and Drug Administration. This doesn't include OTC (over the counter) drugs. Virtually all drugs have the potential to cause adverse side effects in some people. That's one reason why so many medications carry the generic warning to avoid operating heavy machinery or motor vehicles while using the drug. These warnings pose obviously greater significance for flying. While some individuals experience no side effects with a particular drug, others may be noticeably affected. Since each person's response is different, the FAA has to consider the worst possible reaction to a drug in evaluating the decision to allow flight duties.

Drugs that cause no apparent side effects on the ground can create serious problems with only moderate increases in altitude. Even for general aviation pilots flying at relatively low altitudes, the changes in concentrations of atmospheric gases, including oxygen and nitrogen, in the blood can enhance the effects of seemingly innocuous drugs and result in impaired judgment, decision-making, and performance.

Some of the most commonly used OTC drugs, antihistamines and decongestants, have the potential to cause some of the most noticeable side effects and may well be disqualifying as a result. The symptoms associated with common upper respiratory infections, even a bad cold, will usually suppress a pilot's desire to fly, and treating symptoms with a drug that causes side effects only compounds the problem. Allegra (fexofenadine), Claritin (loratidine) and Hismanol (astemizole) are noted to be non-sedating and are allowed by the FAA, even though you still might not be legal under FAR 61.53. Remember, a bad head cold may be a "medical deficiency" under the regulations.

For other pulmonary conditions such as asthma, the FAA approves the use of inhalers, including Proventil, Azmacort, Becanase, or Vancenase, on a case-by-case basis, based on a review of the history of symptoms.

Many antihypertensive and cardiac drugs may also be allowed, case-by-case. For blood pressure control, five categories of medications are acceptable: angiotensin converting enzyme inhibitors (ACE) inhibitors, beta adrenergic blocking agents, calcium channel blockers, alpha-adrenergic blocking agents, and diuretics encompass about 60 different acceptable medications. Other cardiac drugs, such as antiarrhythmics, may also be approved, based on the condition for which the medications are prescribed. Agents used to control angina (chest pain) called nitrates, including nitroglycerine, are not permitted.

Any drug that produces drowsiness or other central nervous system effects and experimental or investigational drugs are prohibited. These medications include narcotic analgesics, stimulants, sedatives, hypnotics, amphetamines, barbiturates, anti-anxiety drugs, muscle relaxants, tranquilizers, and antipsychotics (neuroleptics). Among the drugs classified as stimulants is Ritalin, which is used to treat attention deficit disorder (ADD). Lithium carbonate, used to treat certain types of depressive disorders, may be allowed after careful case evaluation.

All antidepressants are disqualifying. These medications are often prescribed for "off label" use, that is, they are treating symptoms other than those for which the Food and Drug Administration approved the medication. The underlying symptoms and diagnosis may be disqualifying, and the use of an antidepressant medication compounds the situation. However, four SSRI’s, Prozac, Lexapro, Celexa, and Zoloft may be considered for special issuance authorization.

Anticonvulsants, including phenytoin (Dilantin) and carbamazepine (Tegretol) are disqualifying because of the specific medical history that may include a prior seizure, seizure-like event, or risk of seizure. Although these drugs minimize the possibility of a seizure recurrence, their usage does not absolutely preclude another event.

If you are taking a medication that is currently on the disallowed list, it doesn't automatically mean it is disallowed under BasicMed. When you visit your physician for the BasicMed examination, the checklist that you and your physician complete will list any prescription or non-prescription medication that you currently use, as well as information such as the medication name and dosage. Your physician will then address, as medically appropriate, any medications the individual is taking and discuss the medication’s potential to interfere with the safe operation of an aircraft or motor vehicle. Certain medications are not safe to be used at all while flying and others require a reasonable waiting period after use. Pilots, in discussion with their physician, should consult available aeromedical resources to understand potential flight hazards associated with any medications being taken, such as whether the underlying condition the medication is being taken for makes flight unsafe, or to understand side-effects that may be unnoticeable before flight but could impair the ability of a pilot to make sound decisions. In addition to the BasicMed rules, pilots taking medication must also comply with existing Federal Aviation Regulations, such as the self-grounding requirements of FAR 61.53 and FAR 91.17’s prohibition on operations while using any drug that has effects contrary to safety. AOPA’s online medical education course will include medication considerations when evaluating your fitness to fly. AOPA is also continuing to work with the FAA concerning the use of certain medications under BasicMed rules.

Find out the FAA’s position on medications in this database compiled by the AOPA Pilot Information Center. The status of some medications changes from time to time so check back periodically. The database information is verified with the FAA Aerospace Medical Certification Division in Oklahoma City.

If you do not see a particular medication in the database, please call the AOPA Pilot Information Center, 800/USA-AOPA (872-2672), and speak with one of the medical certification specialists . For a more in-depth review of your medical records, consider enrolling in AOPA’s Pilot Protection Services program.