Get the app Get the app
Already a member? Please login below for an enhanced experience. Not a member? Join today
News & Media 2007 AOPA Fly-In and Open House 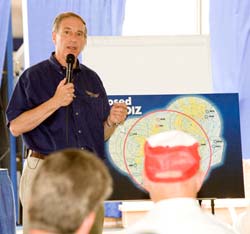 When it comes to the FAA funding debate, "what it's really all about is a huge tax break for the airlines," AOPA President Phil Boyer said June 2 during an informal hangar session during the AOPA Fly-In and Open House.

Most pilots are aware of the threat of user fees and increased taxes on general aviation. Boyer simplified the issue into three points.

"First, take user fees off the table, even for the airlines. User fees are the beginning of the end of general aviation as we know it. Second, know that the airlines are trying for another giant financial bailout by removing the only aviation tax that they pay. Finally, if there is a need to address growing use of the system by some segments of general aviation, primarily corporate operators, then let's pay for that with an incremental increase in the fuel tax." User fees in disguise... 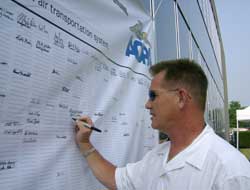 Pilots at AOPA's Fly-In and Open House are making a point to do their part to protect general aviation by signing the petition against user fees. And they're not shy about sharing their opinions of the funding proposal.

"I think it's a bad, bad idea," says student pilot Shawn Stephens of Severn, Maryland, explaining that new pilot starts would decline. Let's not be like Europe...

More than 5,000 AOPA members and aviation enthusiasts descended on Frederick, Maryland, on June 2 to experience general aviation in all its glory. Some 300 airplanes from all over the country and as far as Canada came for the AOPA Fly-In and Open House at the association's headquarters.

The event attracted a unique group of people like the Oxman's, a father and son team, who flew in ready to have some fun.

"We heard you were having a party," said pilot Steve Oxman from Annapolis, Pennsylvania. Oxman jokingly asked about where to find the free fuel as he parked his Beechcraft Bonanza. He said he came for the vendors, the safety seminars, and to talk with AOPA President Phil Boyer. Good spirits, big smiles... 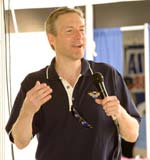 AOPA Project Pilot spokesman Erik Lindbergh had always been comfortable in the air, but not so much because of his famous last name.

When he was little everybody called him "Airik." He was a champion gymnast and an accomplished skier, among other things. But at the age of 21, he was diagnosed with rheumatoid arthritis, which changed his life entirely.

"My life became mostly sitting," he told the crowd at the AOPA Fly-In and Open House. Pass the juice...

Technique: One hand or two on the yoke for flaring?
Procedure: Put the gear down before landing.
Safety: Learn SRM for single-pilot IFR operations.

Pilots of all skill levels discussed those techniques and more with aviation experts from the AOPA Air Safety Foundation and aviation humorist Rod Machado during AOPA's Fly-In.

"There's more than one way to fly an airplane," Machado told more than 100 pilots during his "Yoke and Pedal: Secrets to Better Piloting Proficiency" seminar. While techniques can differ, Machado pointed out that procedures stay the same.

The key, he said, to developing different personal techniques is to be safe.

SRM, single-pilot resource management, is the key to safe operations alone and in the soup.

If you couldn't make it to Wright's seminar, learn safety tips in the free Single-Pilot IFR online course.

AOPA members at the AOPA Fly-In and Open House had a rare opportunity to see exactly what work is being done on the 2007 Sweepstakes Catch-A-Cardinal aircraft. Project Manager Julie K. Boatman showed off photos of the insides of the aircraft (how many times have you seen the inside of the fuselage from the end of the tail?) and the work that has been done so far. The 1977 Cessna 177B, which is in Georgia awaiting its first engine run and test flight, is being restored in an owner-friendly fashion. For example, the cowling features adjustable fasteners so that as the aircraft ages, it will still be easy to connect the bottom and top cowls. Stay tuned to the sweepstakes restoration page for the aircraft's first test flight.

Are you ready for AOPA's Fly-In?

AOPA's seventeenth annual Fly-In and Open House kicks off this weekend (Saturday, June 2) with one of the largest aircraft displays ever — more than 45 aircraft. It's a busy time while you prepare for the most exciting GA event this year. Use this checklist to plan a safe arrival and get the most out of this one-day event.

Pack your flight bag, grab your flight planning gear, and get ready to fly in to AOPA's Fly-In and Open House on Saturday, June 2, at Frederick Municipal Airport (FDK) in Frederick, Maryland. It's the perfect excuse to commit aviation.

While you're planning your flight, make sure you download and study our new arrival procedures. We've relocated the VFR holding pattern to give you greater clearance from the Washington, D.C., Air Defense Identification Zone (ADIZ). You'll be holding just south of the Westminster VOR near Carroll County Regional Airport (DMW) in central Maryland. Be sure to make right-hand turns in the holding pattern because turning to the left could push you into the ADIZ. With hundreds of pilots expected to fly in, remember to be especially vigilant for traffic and to keep your radio communications terse and to a minimum. We will have a temporary air traffic control tower in operation that day.

Add hundreds of pilot products, dozens of aircraft, thousands of aviation enthusiasts, and a dash of good weather, and you've got a recipe for the event of the summer— AOPA's Fly-In and Open House on Saturday, June 2, at our home airport in Frederick, Maryland.

Our doors will be wide open so that you can meet the experts who helped you get back your medical or answered your technical aviation questions. Outside, we'll have nearly 40 aircraft on display, including our/your Catch-A-Cardinal sweepstakes airplane, and more than 100 aviation product exhibits to take care of all your pilot and aircraft owner needs. And we'll have our petition against user fees and avgas tax increases front and center for you to sign. More than 22,500 signatures were collected in April during Sun 'n Fun in Lakeland, Florida. We're also offering multiple AOPA Air Safety Institute seminars.

With the best of GA being represented that day, be sure to bring your friends and family members who are interested in learning to fly. This is the event that will hook them! They'll also get the chance to listen to AOPA Project Pilot spokesman Erik Lindbergh talk about the future of GA.

More than 30 aircraft will be featured during AOPA's Fly-In and Open House on Saturday, June 2. And all segments of general aviation will be represented, from light sport aircraft to traditional trainers to business jets. For a list of aircraft that will be on display and photos of last year's exhibit. AOPA's 2007 sweepstakes Catch-A-Cardinal, a 1977 Cessna Cardinal, will also be on display for each member to get a look at what could be his or her new aircraft early next year.

Save on fuel at AOPA Fly-In 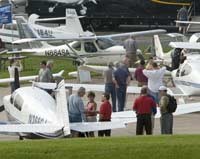 Looking for an excuse to get away for a weekend? Come to AOPA's Fly-In and Open House on Saturday, June 2. We've got plenty of reasons you can use to convince your friends and family.

See the latest aircraft on the market. Shop for your pilot needs at 100 exhibits. Increase your proficiency through aviation safety seminars. Tour AOPA headquarters. Learn about the state of GA. And yes, there's more—fuel discounts.

This year the FBO at Frederick Municipal Airport, Frederick Aviation, is partnering with Avfuel to provide pilots with the "Take 25" promotion. If you fly into Frederick on June 1 or 2, you will receive a discount of $0.25 per gallon of fuel. If you buy 25 gallons or more, you will be entered to win one of 10 $25 savings bonds.

You can check the fuel prices in AOPA Airports, which recently added FBO fuel prices for thousands of airports nationwide. The discounts in fuel on those days will be reflected in the FBO/Facility/Fuel Information tab for Frederick Municipal Airport.

They'll be speaking on topics including user fees, aviation safety, and growing the pilot population. Machado will cover the lighter side of general aviation with his popular seminars — "Aviation Humor with Rod Machado" and "Yoke and Pedal: Secrets to Better Piloting Proficiency."