Get the app Get the app
AOPA Members DO more LEARN more SAVE more - Get MORE out of being a pilot - CLICK HERE
News & Media Answers for Pilots: Birds in the news

Answers for Pilots: Birds in the news 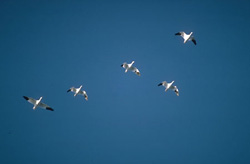 News coverage of Captain “Sully” Sullenberger’s celebrated landing of US Airways Flight 1549 in the Hudson River in January, just a few minutes after the Airbus A320 he was flying struck a flock of large birds on takeoff from LaGuardia Airport, has raised birdstrike awareness and spurred conversations on the topic across the country. Those of us who fly particularly admire Sully’s ditching success and applaud the safe rescue of all on board. We hope we could do as well, if ever faced with similar circumstances. In fact, statistics show that the likelihood of encountering birds in the airspace we share is increasing, as large bird populations continue to grow annually.

According to a June 2008 collaborative report from FAA, U.S. DOT, and APHIS (U.S. Department of Agriculture, Animal and Plant Health Inspection Service, Wildlife Services), titled “Wildlife Strikes to Civil Aircraft in the United States, 1990—2007,” the population of large birds has increased steadily over the past couple of decades. Fourteen species of birds are classified as large, each weighing in at more than eight pounds. Thirteen of these 14 species show population growth. Of the birds that were identified, these have had the highest strike incidence and caused the greatest economic losses over the past 18 years: gulls (20 percent, $35,471,453 loss), doves/pigeons (14 percent, $11,034,436 loss), raptors (13 percent, $34,782,970 loss), and waterfowl (9 percent, $95,799, 452 loss).

The good news is that 87 percent of the total known bird strikes had no effect on the outcome of the flights. However, couple this with an increase in air traffic at an average rate of about 2 percent a year, which is expected to continue well into the next decade, and we can understand the growing concern.

The wildlife strike report points out other interesting facts: strikes occur most frequently in four states: California (6,920), Texas (5,317), Florida (5,178), and New York (4,333); birdstrike totals peak across the country during the months of July through October; about 62% of the total known strikes occur during the day, with a surprising 28% that occur at night. (The data shows more than 1,000 owl strikes with an economic impact of $4,003,288.) Very few strikes occur at dawn or dusk.

Logically, the data shows that 93% of all known birdstrikes occur either on or close to the ground—during takeoff, climb, approach, or landing, with the approach phase having the highest incidence. Having said this, it’s worth pointing out that the higher altitudes are not exempt from the problem—more than 300 strikes have been reported at altitudes above 10,000 feet AGL.

As I was writing this article, it occurred to me how fortunate we were not to have many large birds around Frederick Municipal Airport. Located in central Maryland, the airport is partially surrounded by farmland. AOPA headquarters sits adjacent to the airport. Late that same afternoon, as I began my drive home, I was surprised to see several dozen geese feeding on corn left from last fall’s harvest in a field less than 1,000 feet from Runway 5-23. It seems we are not as immune as I thought, and perhaps I haven’t been paying enough attention.

Some airports have been engaged for years in dissuading birds from landing nearby. A recent news article on CNN, written by Patrick Oppmann discusses how Sea-Tac persistently shoos away birds from Seattle’s airport environment. The problem is not new—they’ve had a wildlife biologist on staff for more than 30 years, whose efforts to create an unfriendly bird environment have apparently paid off. Part of the effort is biological—since birds like to land in flat open spaces, those areas have been planted with shrubs. Part of the effort is technological— lights, noise, and occasional booms from guns (using blanks) constantly harass feathered fliers. Sea-Tac even has radar terminals designated for bird tracking, providing opportunity to spot them before they come close enough to the airport to be visible.

If your local airport has problems with birds, and you want to explore possible solutions, you might want to check out FAA’s Airport Wildlife Hazard Mitigation Web page. It includes a lot of information on the challenges you may face, and some resources for working toward developing a wildlife management plan.

In the event that some portion of Sully’s luck becomes yours, you can report a birdstrike online. Directions on how and where to send bird remains are included at the bottom of the form. Actually, let’s hope you share all of Sully’s luck—in that you walk away unscathed, just as he and his 152 passengers did.