Get the app Get the app
AOPA Members DO more LEARN more SAVE more - Get MORE out of being a pilot - CLICK HERE
News & Media What's up with 121.5 MHz ELTs?

U.S. pilots should beware that satellite monitoring of 121.5 MHz emergency locator transmitters (ELTs) ends on Feb. 1. However, existing 121.5 MHz ELTs will continue to meet the FAA’s regulatory requirements after that date.

Even though the satellites will no longer monitor 121.5 MHz signals, the search and rescue community will still respond when notified through other means. ELTs were originally intended to use 121.5 MHz to inform air traffic control and pilots monitoring the frequency of an emergency. It will continue to serve in that role in a limited capacity, relying on fellow pilots and ground-based radio facilities to monitor the signals.

An upgraded ELT, the 406, will be monitored by satellites and contains a 121.5 MHz ELT within it. When linked to a GPS, it provides precise coordinates to search and rescue responders, narrowing the search area. For more information about the differences between the two ELTs, read “ Blind to the satellites” from the October 2008 “AOPA Pilot.”

“AOPA has worked hard to prevent a mandate to equip with 406 MHz ELTs in the United States,” said Andy Cebula, AOPA executive vice president of government affairs. “The choice to switch to the 406 MHz ELT remains in the hands of pilots, who we believe are best positioned to evaluate their individual situation and decide what kind of ELT they need.” 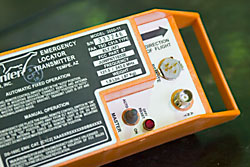 U.S. aircraft owners have the option of replacing their 121.5 ELTs with newer models that broadcast on 406 MHz. The new ELTs cost about $900 plus installation. Because of AOPA’s efforts, it’s up to aircraft owners and pilots to decide whether to buy and install new ELTs, use handheld personal locators, or stick with their existing 121.5-based ELTs. Those who continue using the 121.5 MHz ELT should consider carrying other equipment such as personal locator beacons, cell phones, or other devices in addition to using flight plans and radar services. Pilots should take as many steps as possible to improve their chances of being located in case of an emergency.

The decision to continue flying with 121.5 MHz ELTs or to upgrade to the 406 MHz ELT should be based upon a number of factors, including the type of flying they do, the equipment they carry, and the type of terrain they overfly.

The rules for U.S. pilots flying internationally to equip with a 406 MHz ELT are more complex and evolving.

Canada has proposed, but not yet required, that aircraft flying within its national airspace boundaries be equipped with fixed 406 MHz ELTs. So for now, U.S. aircraft flying to and from Canada may have either 121.5 MHz or 406 MHz ELTs. Canada is planning a two-year conversion period for the new equipment after the new rules are set. AOPA will report changes as soon as the Canadian rule is finalized and published.

Mexico will allow U.S.-registered aircraft to continue using 121.5 MHz ELTs until July 1, 2009, or their next mandatory ELT battery replacement, whichever comes first. AOPA is working with officials in Mexico to determine ELT requirements after July 1. A position statement (written in Spanish) from the Direccion General De Aeronautica Civil is posted online, and AOPA recommends that pilots who fly to Mexico carry a copy of it with them to avoid confusion among local officials. Read an English summary of its contents and more information on flying to Mexico.

Bahamas officials will allow U.S.-registered aircraft to continue flying there with 121.5 MHz ELTs until Feb. 1, 2011, and then reevaluate. The Bahamas Ministry of Tourism has also issued an “ Exemption from Mandatory 406MHz Emergency Locator Transmitter,” which is available online and should be printed and carried to the Bahamas to present to officials, if needed. Read more about flying in the Bahamas.

For more information about ELT requirements in other countries, call 800/USA-AOPA.

What do you think about the discontinued satellite monitoring of 121.5 MHz? Will you switch to the new ELT or keep your existing one? Let us know your thoughts in this short survey.