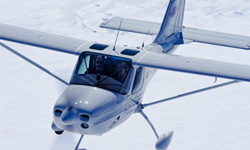 In the letter of interpretation signed Jan. 16 and sent to AOPA this week, the FAA said that each encounter with ice will be judged by whether a “reasonable and prudent” pilot would take the same actions or make the same decisions as the pilot in the icing situation.

“For two years, AOPA urged the FAA to incorporate the pilot’s entire decision-making process into a revised definition of known icing conditions. This interpretation brings us much closer to an operationally prudent definition,” said Randy Kenagy, AOPA government affairs chief of staff.

In the past, the FAA considered any situation where temperatures were below freezing and there was visible moisture to constitute known icing conditions. A 2006 interpretation from the FAA also included relative humidity as a factor, grounding many GA pilots even when no visible moisture was present.

AOPA wrote to the FAA in November 2006, asking the agency to rescind the letter, which it agreed to do in September 2008.

The new letter of interpretation stresses that pilots should have the necessary weather knowledge to make sound flight planning decisions. AOPA Air Safety Foundation Executive Director Bruce Landsberg’s blog on the subject makes the point a little differently. “From a practical perspective the idea is to get as much utility out of our aircraft without getting caught between hard ground and hard ice. Regardless of good or not-so-good forecasts, we need to have a solid escape route available at any time,” he writes.

Pilots can get help expanding and reinforcing their weather knowledge through the AOPA Air Safety Foundation’s free interactive online courses and publications. Courses includes “ Weather Wise: Precipitation and Icing,” “ Do the Right Thing: Decision Making for Pilots,” and “ SkySpotter,” which teaches pilots how to give pilot reports. Each course takes about an hour to complete and may qualify for accident forgiveness under your insurance policy and for FAA Wings credit.