Get the app Get the app
News & Media Never Again: Playing through

Gripping the instrument panel, my friend looked over at me and said, “I guess we’re playing through!” My Piper Cherokee 180 roared over a golf green about 10 feet above the grass as four very surprised golfers and a caddy instinctively ducked. At the moment, I was thankful that we were off the ground at all.

The Cessna pilot’s decision to gently set his airplane down on the lakeshore to enjoy a few moments of solitude went badly wrong when the airplane sunk to its axles and came to an abrupt stop. Find out how the pilot got his airplane off the beach, and back into the air.

Read this latest installment and other original “Never Again” stories published each month on AOPA Online.
“Never Again” is sponsored by the AOPA Insurance Agency. 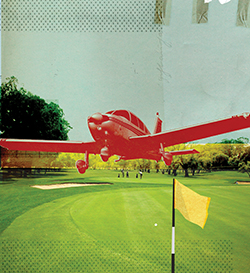 Gripping the instrument panel, my friend looked over at me and said, “I guess we’re playing through!” My Piper Cherokee 180 roared over a golf green about 10 feet above the grass as four very surprised golfers and a caddy instinctively ducked. At the moment, I was thankful that we were off the ground at all.

Earlier that day, we took off from New Hampshire’s Berlin Municipal Airport, bound for Plymouth Municipal, a relatively short hop over the White Mountains. A typical New Hampshire summer day, it was hot, hazy, and humid. It was also my first short cross-country in my new airplane with passengers after receiving my private pilot certificate.

With my baby daughter Moriah fast asleep in a car seat in the back, I answered questions my friend, Don, had about indicators and devices on the panel. Sluggish at best would describe the aircraft’s performance, even though the airplane had 180 horsepower and a light load. We flew over the Presidential Range, the 6,000-foot peaks looking flat in the haze below, talking and laughing. I have to admit my pilotage was less than meticulous.

With Don helping, we both scanned for the runway at Plymouth. Plymouth is close to the only major interstate highway in the area, I-93. Westerly winds, being what they are at altitude, had shifted our flight path slightly east.

However, I spotted an airplane in a clearing on the ground near a golf course as was expected. The peculiar thing was the size of the windsock. It looked to be about half the size of the ones I’d seen at municipal airports. The runway was much shorter, too.

With the onset of a little nervousness, I guessed I was losing some of my “right stuff” confidence. I set up for a downwind leg, using smoke from a nearby stack as it surely was easier to see than the tiny windsock. As we entered short final I noticed the grass runway looked as though it hadn’t been cut! A queasy feeling in the pit of my stomach came creeping in. I made the executive decision to continue the landing, although it all didn’t seem to add up. On final, holding the nose gear off until the yoke was in my lap, I discovered what I’d hoped was an illusion.

Tall grass! Up to your knees grass! We pulled off the runway and I shut down the engine.

Don asked, “Are you sure we’re at the right airport?”

We got out, leaving the door open for my little sleeping beauty in the back seat. She was totally unaware of her daddy’s blunder. Don paced the runway and came back with a length guesstimate for me to assess. I decided to make a run for it. Although we were in a field, I later learned it was a private strip (Bradley Field, NH49), hence the airplane that we spotted and the condition of the field.

The departure end of our homemade airstrip was at the edge of a green on the golf course. On the other side was a downhill run to a river and a shallow valley with a 75-foot cliff on the west side. To the east was an elevated highway, I-93. Tight wouldn’t have described it. Squeaky tight would be better.

After an eternal back-taxi on the field, engine temps rising right in sync with my blood pressure, I lined up for takeoff and pushed the throttle up. So began the longest 17 seconds of my flying career. Genius that I wasn’t, I could see we were barely reaching 50 knots and I needed 60-plus to rotate—with a slight bit of ground effect coming into the picture. My mind racing as we neared the fairway, and with that granite cliff filling the windshield at an increasing rate, about to take out four golfers and a caddy, I had a thought—bounce!

I pulled the nose up, getting enough lift to slam the airplane flat-footed to the ground just before the end of the runway. Bam! We hit hard, doing a couple of yes-ma’ams as our heads bobbed, but the baby didn’t even wake up! The green and the fairway sloped nicely toward the river, and between ground effect and a rising airspeed, I ever so gently nursed the airplane down the valley until we could climb out. The red stall warning light winked off.

“I guess we can breathe now,” I said.

More amazingly still, my passenger said, “You know, I was thinking, he’s got his baby daughter in the back and I know he won’t kill her!”

Little did he know, there had been a moment when I wasn’t quite sure.

After reaching a reasonable 7,500 feet, we started recounting the events. It was more a distraction to extinguish the severity and the peril we had just dodged that we laughed heartily. We both knew full well the impending doom I had put the three of us through. This is when Don brought up the golfers and caddy ducking as we launched over their heads, with the stall warning light blazing red. He reiterated, “Hey, I guess we were just playing through!”

After landing back at Berlin, my instructor David Nichols couldn’t help but make a comment. “You boys been haying a field?”

Sheepishly, I told him about my mistakes. I’d landed at the wrong airport and compounded my mistake by taking off despite the short runway, tall grass, and high density altitude. The fact that I was an inexperienced pilot in a relatively unfamiliar airplane should have lessened my bravado, but didn’t. However, I’ve left the bush flying to real bush pilots ever since.

Daniel Penney, AOPA 1036899, is a flight instructor and commercial pilot with instrument and multiengine ratings and about 3,000 hours flight time. He lives in Gainesville, Georgia.