Get the app Get the app
AOPA will be closed July 4th, in observance of the Independence Day holiday. We will reopen at 8:30 am ET on Tuesday, July 5.
News & Media Ready ... set ... rally! 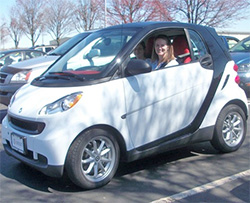 The Fun to Fly Remos is waiting in its hangar, poised for action. The Smart car has gone to be outfitted with designs that are sure to turn heads along I-95. It’s almost time for the Road and Runway Rally.

The rally—a dash from Frederick, Md., to Lakeland, Fla.—starts April 10 and will take four intrepid contestants down the eastern United States for a grand arrival at Sun ’n Fun April 13. They’ll stop at airports along the way to take on wacky competitions and show off the small but very capable machines that carry them: a Remos GX light sport aircraft and a Smart fortwo car.

The car was getting its fair share of attention around town in Frederick, even before it was rally-ready with colors. AOPA eMedia Managing Editor Alyssa J. Miller took the car for a spin March 31 to get a feel for its handling—and to find out some of the flourishes that make the car unusual. It’s not just the size; Miller got to try out the automated manual transmission, but kept her hands off the paddle shifters by the steering wheel … at least for now. There’s a long road ahead. 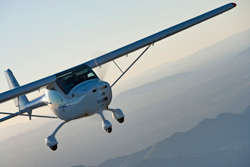 In the meantime, Flight Training Deputy Editor Ian J. Twombly was getting checked out in the Remos. The capable machine rivals a Piper Archer in many performance characteristics, Twombly said. Like the Smart car, the Remos has some qualities that may take some getting used to—like the Rotax engine, which is self-leaning, starts and stops quickly with the key, and needs a good burp before flight (seriously).

What’s in a name? Meet teams Orville and Wilbur

Last week, we asked you to help us come up with a name for the two teams that will dash to Lakeland. What could capture the essence of the competition? Members weighed in with their suggestions.

Some zeroed in on the contestants, who gamely agreed to this adventure, or the vehicles, which make a good case for thinking small. Gordon Feliciano gave us “The Mad Dashers,” and Don Thomsen gave us “Light Sports High and Low.” Doug Swan gave us “Team Dart and Team Smart” (the latter may be the car, or our bright contestants), and Max Trescott gave us the “Mercedes Smarties and Remos Hearties.” Our ralliers do have a lot of heart.

Others got inspiration from television or the silver screen. “‘Smokey’ (Smart Car) and (yes, you guessed it) ‘The Bandit’ (Remos),” wrote R. Judy. (We assure you, our contestants will be staying on the right side of the law…) Chris Johanessen suggested “RoadRunners and Tweety Bird.” Our compliments to the Acme Corporation.

In the end, the inspiration came from two adventurous spirits who set the stage for generations of pilots to come: Orville and Wilbur Wright. We won’t be ushering in the era of heavier-than-air human flight, but we will be paying tribute to the heart and ingenuity of these aviation greats.

In Miller’s right seat will be Wired.com correspondent Jason Paur, rounding out Team Orville. An instrument-rated private pilot from Seattle, Paur has logged about 325 hours in 35 different kinds of aircraft.

Joining Twombly will be MotorWeek reporter and producer Steve Chupnick on Team Wilbur. While Chupnick only has about 25 minutes in the Remos, he has been behind the wheel of an original Model T and a DeLorean; he leads our competitors in automotive bona fides.

Team Orville will start the rally in the Smart car, while Team Wilbur will take off in the Remos. Halfway through the trek, the teams will switch vehicles—but their names will stay the same. Start rooting for a team!

Check to see if the rally will be in your area. If you can’t make it in person, track the adventure online. The contestants will tweet, blog, and post pictures from the road.