Get the app Get the app
Already a member? Please login below for an enhanced experience. Not a member? Join today
News & Media Fuller, other international leaders call for united front 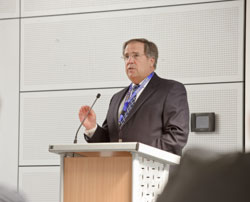 Collaboration among aviation groups has proven effective in the United States and it can help strengthen general aviation in Europe too, international officials declared during the first day of the Aero 2010 aviation show in Friedrichshafen, Germany.

At a press conference on opening day sponsored by the General Aviation Manufacturers Association, AOPA President Craig Fuller reminded attendees that collaboration helped present a united front against user fees in the United States, causing the notion to be withdrawn from consideration for probably at least two years. Cooperation by the same user groups helped foster a GA caucus in the U.S. Senate and another in the House of Representatives.

In his role as president of the International Council of Aircraft Owner and Pilot Associations, Fuller called on the 470,000 AOPA pilots in 68 countries to work together for similar results elsewhere; 33 countries in Europe have AOPA organizations as members of the international federation.

The challenges internationally and especially in Europe are huge, according to Ed Smith of GAMA. Smith said the creation of the European Aviation Safety Agency (EASA), which unites aviation rulemaking throughout Europe, is a big step in unifying regulations on the continent.

“We’re in the middle of it now; in the eye of the storm and it’s important that all stakeholders come together,” Smith said. Among the biggest challenges in Europe are the completion of the unification process, dealing with environmental issues, and moving forward with ATC modernization, he continued.

EAA Vice President of Industry and Regulatory Affairs Earl Lawrence said adoption of light sport aircraft standards worldwide is an important step in making aviation as accessible and affordable as possible. Many countries as diverse as China, Australia, and Colombia have adopted the standards, but many others have not. EASA will play an important role in uniting Europe behind LSA standards, he said. The transition to an unleaded fuel is critical for GA, as international governing bodies will soon prohibit the use of any fuel with lead in it.

“There is no easy answer,” Lawrence said, but it is an environmental and economic problem that must be dealt with collectively.

Nicolas Chabbert, representing the European committee of GAMA and a coalition of European aircraft manufacturers, said his group plays an important part in helping the European authorities understand general aviation. “GA is not competition to public transportation, it is a complement,” he reminded.

During a question and answer session, Michael Kraft, general manager of Lycoming, reiterated Lawrence’s comments about the importance of dealing with the leaded fuel issue. “We only get one chance to get it right. Leaded avgas will go away,” he stressed, because of political, regulatory, and economic pressures.

Editor in Chief
AOPA Editor in Chief Tom Haines joined AOPA in 1988. He owns and flies a Beechcraft A36 Bonanza. Since soloing at 16 and earning a private pilot certificate at 17, he has flown more than 100 models of general aviation airplanes.
Go to Thomas B Haines's Profile
Topics: Advocacy