Get the app Get the app
AOPA will be closed July 4th, in observance of the Independence Day holiday. We will reopen at 8:30 am ET on Tuesday, July 5.
News & Media Pilots pledge to engage in aviation on AOPA Day

Pilots pledge to engage in aviation on AOPA Day


Pilots are stepping up to do their part to protect their freedom to fly. More than 2,000 Sun ’n Fun attendees have stopped by AOPA’s Big Yellow Tent to pledge to engage in aviation this year.

The push for pilots to engage in aviation coincides with AOPA President Craig Fuller’s message April 15 at Sun ’n Fun in Lakeland, Fla.

“Being more engaged can be as simple as staying informed about the issues that affect your flying and as involved as hosting a major public event. But in between are almost infinite opportunities,” Fuller told pilots Thursday evening during an early kickoff for AOPA Day. SkySpot Advertising, LLC sent a specially equipped aircraft over the grounds advertising the talk to attendees in a lighted message. 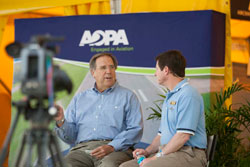 Pilots are submitting their pledge to engage in aviation at kiosks set up in AOPA’s Big Yellow Tent after signing up for a chance to win a Bose Headset X. And they are coming up with many ways to engage: encouraging younger students to earn their pilot certificate, breathing new life into the general aviation community, advocating for GA among nonpilots, and finishing the current certificate or rating for which they are training, are just a few. Most pilots pledged to get engaged by attending an aviation event, supporting their airport, and reading industry news to stay current on the state of GA. Others said they would find out where their elected officials stand on GA. In addition, nearly 1,000 pledged to contribute to the AOPA Foundation, AOPA Political Action Committee, or GA Serves America.

They’re also engaging with AOPA, signing up for the association’s various programs, renewing their membership, and, of course, trying to figure out ways to increase their chances of winning AOPA’s 2010 Fun to Fly Remos GX Sweepstakes aircraft.