Get the app Get the app
AOPA will be closing at 3:15pm ET Thursday, December 1st. We will reopen Friday morning at 8:30am ET.
AOPA Members DO more LEARN more SAVE more - Get MORE out of being a pilot - CLICK HERE
News & Media Politicians & Planes 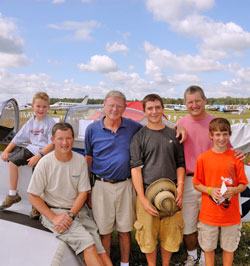 Inhofe flies during his frequent visits to Oklahoma. “I take one day and I go to as many as four or five different communities. My state legislative director can’t find a place in the state I haven’t flown to,” he said.

“I always like to go back to the basics,” said U.S. Sen. Jim Inhofe (R-Okla.), a commercial pilot and CFI who prefers to teach in taildraggers. Inhofe applies a similar attitude to his work in Congress. He recently toured the Air Force’s pilot training program. “They actually start their flight training with gliders,” he observed.

Inhofe’s chief of staff, Ryan Thompson, is the son of a former chief of staff. The senator was visiting Thompson’s father at home one day, “and this skinny kid was flying this flight simulator” on a personal computer, Inhofe recalled. He took Thompson flying in a Citabria, and Thompson is now a student pilot.

The value of GA

After eight years in the House of Representatives, Inhofe decided in 1994 to run for the Senate. His competitor, Dave McCurdy, also had served in Congress for eight years. “He should have won,” Inhofe said. “One of the major reasons he didn’t was that I was everywhere,” thanks to the use of general aviation. “You have the total flexibility” to go where you want to, when you need to, he said.

Inhofe started flying 54 years ago, training at Harvey Young Field, a grass strip in Tulsa, Okla. “At that time you could get your license for $32—eight hours at $4,” which included the rental of an old Aeronca Champ. He credits the ability to fly on business with keeping him engaged in aviation. 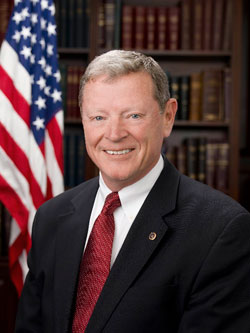 “Many new pilots can’t keep flying, and they’re not in an occupation that can sustain it,” said Inhofe, who was in the development business at the time. He flew to South Padre Island, Texas, every weekend and regularly flew to Arkansas. Now he flies during his frequent visits to Oklahoma. “I take one day and I go to as many as four or five different communities. My state legislative director can’t find a place in the state I haven’t flown to,” he laughed. “I’ve always been able to use flying with what I’ve been doing.”

Inhofe earned his flight instructor certificate to teach his children how to fly, and now his grandchildren are learning from Inhofe’s son, who also is a CFI. “I can remember the first time my son Perry [now a hand surgeon] soloed. On his first flight some guy in a Cessna 421 busted the pattern and he had to do an emergency go-around,” he said. “The reason he was such a good instrument pilot was that when he was younger, he wasn’t tall enough to see over the instrument panel.”

He even became an aircraft dealer briefly. “Back when Gulfstream bought out Grumman, they had 54 Grumman Tigers,” recalled Inhofe, who went to buy one of them. He ended up buying them all. While his wife was used to him buying airplanes, “to call her up and say, ‘I bought 54 airplanes,’ was a bit of a surprise.” Inhofe said he always liked that airplane because it employed a lot of advanced technology for its day. “Honeycomb construction, for example, came out of Experimental aircraft construction.” He still has one—it survived a forced landing after the propeller departed the airplane in flight.

“A lot of people don’t understand general aviation,” Inhofe said. “They think if you own an aircraft you’re a fat cat, and you don’t want to be taxed.” 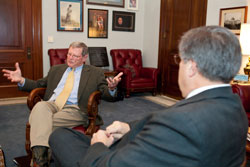 But individuals can make a difference. Inhofe recalled efforts in the early 1990s—when product liability concerns had a chilling effect on the industry, and Cessna stopped building piston-engine aircraft—to establish an 18-year statute of repose as a means of limiting the liability of aircraft manufacturers. “We had holdouts in a number of states,” he said. Inhofe spoke on a Saturday morning at Oshkosh during EAA’s convention and he said, “‘We can pass this bill from Oshkosh.’ I explained why it was that we were a dying industry.” He went on to name members of Congress who were not supporting the bill. Soon thereafter, the General Aviation Revitalization Act of 1994 was passed. “As a result of that, [the United States] is a major manufacturer of aircraft and parts, instead of an importer.”

Inhofe also recalled the struggle to pass what’s been called “the Hoover bill,” which gives pilots a means of appealing an emergency revocation of their pilot certificate. It took three years to push through Congress. “At that time there were so few people who had an understanding or appreciation for aviation,” he said. “I learned the hard way how hard it is. I’m the last active commercial pilot in the Senate.”

One of Inhofe’s most memorable flying experiences took place on an around-the-world flight in a Cessna 414. “We were trying to emulate the flight of Wiley Post”—his first around-the-world flight, Inhofe was quick to clarify. “Flying across Siberia is just unbelievable. But the gas was awful.” The fuel was so bad that it kept clogging the fuel lines, and the engines were running roughly—and the nearest airport was 625 nm away. But they kept running, he said.

Inhofe owned a 1939 Stinson 10A that he found in a barn. “I really liked that plane. It was like a brand-new airplane.” To fly it out of the field beside that barn required lifting off and banking nearly vertically to fly between trees at the end of the runway—a technique shown to Inhofe by the airplane’s previous owner on a demo flight. Later, the Stinson’s 90-hp Franklin engine quit in flight, and Inhofe deadsticked to a landing on a residential airpark. “[A mechanic there] had the only parts for a Franklin 90 engine in the world—and I landed at his airport.”

One day, while flying to a tornado memorial near Ada, Okla., Inhofe’s Tiger lost its prop, the flywheel—and a chunk of the engine itself. “I had to figure out the new stalling speed,” he noted. When he glided to a landing at an airport in Claremore, Okla., “I didn’t have a nose gear but I didn’t know it,” and on landing the airplane stood up on its nose. The prop had landed in a farmer’s yard, nearly hitting him. It turns out the farmer and Inhofe had attended high school together 40 years earlier. 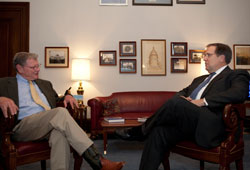 Inhofe supported the cosponsors of the Senate’s GA Caucus, and is pleased that its leaders aren’t long-time pilots. “This broadens the appeal,” he said.

At the time Inhofe moved from the House to the Senate in 1994, the House had an aviation caucus. “When we came over to the Senate we didn’t have one. We’ve been talking about it for a long time.” He supported the cosponsors of the Senate’s GA Caucus, and is pleased that its leaders aren’t long-time pilots. “This broadens the appeal,” he said.

“The goal I have in this is to get to the point where you won’t have problems like I had with the Hoover revocation bill,” said Inhofe, who encourages other senators to attend aviation events like EAA AirVenture in Oshkosh. “If you get other members of the Senate expressing an interest in learning more about [general aviation]—that would be the primary objective that I would have.”

Technical Editor
Mike Collins, AOPA technical editor and director of business development, died at age 59 on February 25, 2021. He was an integral part of the AOPA Media team for nearly 30 years, and held many key editorial roles at AOPA Pilot, Flight Training, and AOPA Online. He was a gifted writer, editor, photographer, audio storyteller, and videographer, and was an instrument-rated pilot and drone pilot.
Go to Mike Collins's Profile
Topics: Advocacy