Get the app Get the app
AOPA will be closed July 4th, in observance of the Independence Day holiday. We will reopen at 8:30 am ET on Tuesday, July 5.
News & Media Ford touts GA on Hill

Whether backcountry flying in an Aviat Husky or airlifting supplies to earthquake-ravaged Haitian communities in a Cessna Grand Caravan, Harrison Ford is engaged in aviation.

The actor and avid pilot shared his love of flying with members of the congressional general aviation caucuses on Capitol Hill April 27 and discussed the importance of GA to economic development, humanitarian efforts, and medical services. In a discussion with AOPA President Craig Fuller, caucus members, and industry leaders, Ford stressed the importance of sharing aviation with the next generation of pilots and preserving the American freedom to fly. 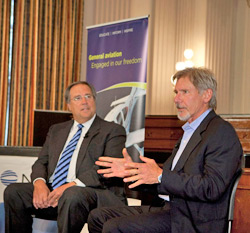 “America has a great legacy of aviation,” Ford said. “We’ve led the world in aviation for much of its hundred-year history.”

“Early last year, we came to the conclusion that we needed to do a better job explaining what general aviation is all about,” Fuller said. So, AOPA approached a pilot with a very recognizable face to help get the word out. Ford volunteered to be the spokesman of the General Aviation Serves America campaign to help communicate the importance of GA to the nation. A year later, House and Senate GA Caucuses are spreading understanding of GA in the halls of Congress while joint industry efforts spread the word to the public.

Co-chairs Allen Boyd (D-Fla.) and Vernon Ehlers (R-Mich.) formed the House GA Caucus one year ago to help teach their colleagues more about GA. The caucus has grown to 116 members. The Senate version, formed shortly thereafter by co-chairs Mark Begich (D-Alaska) and Mike Johanns (R-Neb.) has grown to 29 members. During the discussion, Boyd, Ehlers, Begich, Johanns, and others talked with Ford about the challenges ahead, GA relief flights to Haiti, the growing caucus, and recreational flying. 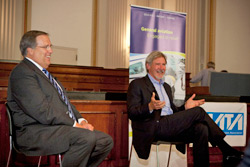 Begich asked Ford about the biggest challenge to ensuring that GA grows and remains strong in the United States, noting that GA is alive in his home state but still faces hurdles. Ford, the former honorary chair of the EAA Young Eagles program, is mindful of the need to interest children in flying and offered his perspective: “We have to continue to build people’s interest in aviation so that we have new pilots coming in.” He added that it is important to draw young people into aviation industry jobs as well.

Johanns cited the GA flights that brought volunteers and supplies to Haiti after the devastating Jan. 12 earthquake and asked Ford about the recovery ahead. Ford has firsthand experience in Haiti; he made several trips to a remote dirt strip in Haiti, airlifting a team of doctors and nurses, as well as critical medical supplies, to a facility in Hinche.

“It was very gratifying to be able to contribute in some small way to the effort,” Ford said. He added that he saw many GA pilots display selflessness and dedication in Haiti. GA pilots have conducted thousands of flights to deliver supplies and aid workers to the earthquake-ravaged nation. 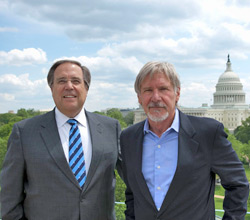 Ehlers encouraged members of Congress on both sides of the aisle to join the caucuses: fly right, see him; fly left, see Boyd. ( Check the full list to see if your senators and representative are members of the caucus.)

Boyd thanked Ford for his involvement in the GA Serves America campaign and asked him about his favorite aircraft for recreational flying. “I’ve got five kids. I don’t have a favorite kid,” Ford responded. He has many airplanes, he said, and each has its purpose. But, he added, “The de Havilland Beaver has got a special place in my heart.” Ford flew the Beaver on-screen in the film Six Days Seven Nights.

Ford will go back to filming a new movie in June: Cowboys and Aliens. But he won’t give up flying for the shoot, even though oftentimes production companies try to impose restrictions on actors’ activities while filming. “Since the very beginning I’ve been anxious to preserve the ability to fly while I’m making a film,” he said.

“A pilot that’s not flying is at a safety disadvantage, and I like to keep flying,” he added. His efforts in the public eye and on Capitol Hill are helping to ensure that pilots across the nation can do the same.