Get the app Get the app
News & Media &lsquo;Growing the pilot population - one youth at a time&rsquo;

&lsquo;Growing the pilot population - one youth at a time&rsquo; 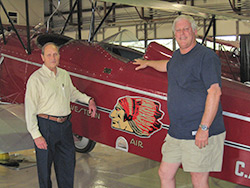 The American pilot population has been decreasing for years, but a group of pilots at the Peachstate Aerodrome in Williamson, Ga., have launched a program to help reverse the trend—and help young people achieve their dreams of flight.

The group formed the Candler Field Flying Club in November 2009 to offer affordable flight instruction for young people and pass on the legacy of flight to the next generation. After only five months, the club already has 23 members, eight of them under the age of 20. AOPA Foundation President Karen Gebhart came across this remarkable story when she traveled to the Peachstate Aerodrome/Candler Field for a pilot town hall meeting April 21.

Gebhart came to the field at the invitation of active pilot and general aviation advocate Lance Toland, and she spoke to pilots about the state of GA. While there, she met with two principal supporters of the club, Ron Alexander and Glen Marsh, and said their effort to share flight with the next generation of pilots is an inspiring example.

“The Candler Field Flying Club shows how a few pilots who want to give back can make a big difference in the lives of young people,” Gebhart said. “These pilots are my heroes for growing the pilot population—one youth at a time.”

The flying club rents its Cessna 172, donated in the name of Marsh’s father, for $70 wet to members. That makes the goal of a pilot certificate more achievable for young people scraping together the money for training. Students may also train in an Aeronca Champ: “Instruction techniques will reflect time honored methods of flying to include proficiency in operating antique and tailwheel aircraft while meeting modern FAA flight requirements and standards,” the website explains.

Alexander, the owner of the Peachstate Aerodrome and a retired Delta captain, lent his support to the club because he wants to get more young people into flying. Programs like the Young Eagles do a great job of sparking children’s interest in aviation with a first flight, and he saw an opportunity to build on that interest by providing an affordable avenue for flight training. Five retired pilots have offered to give back through the club and help young people make the transition from dreamers to pilots.