Get the app Get the app
Already a member? Please login below for an enhanced experience. Not a member? Join today
News & Media Answers for Pilots: Aircraft Buyer's Market 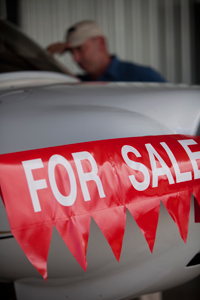 There are signs that the challenging economic conditions have stabilized and are beginning to recover, and the aviation industry seems to be following that trend. While aircraft owners have watched the value of their aircraft drop over the last few years—making it a good idea to hold on to their investments for awhile—the resulting buyer’s market has offered remarkably low aircraft prices for those in the market to purchase. AOPA Pilot published a group of stories in July’s issue, “ Time to Buy: Seizing the day”, describing the aircraft-buying experiences of four very happy, new owners who were able to take advantage of extraordinary deals.

Here’s an example of the changes in aircraft value over the past few years. In January, 2007, Vref valued a 1980 Piper Archer II at $63,000. Their graph shows a steep decline in value to $51,000 as of the end of May 2010. However, in June, the graph begins a climb—showing the same Archer valued at $53,000 in mid-June, when this article was being written. While sellers are crossing their fingers that the upward trend will continue, buyers should realize that the tremendous purchasing opportunities of the past couple of years may be coming to an end.

Hmmm, so maybe you’re thinking of doing a little browsing? If you want succinct information on a variety of aircraft, check out AOPA’s online collection of aircraft fact sheets, offering synopses for dozens of used aircraft. Each fact sheet includes a picture, an overview, a summary of performance, aircraft specifications, links to archived articles on the aircraft, and a list of additional resources—making them useful for comparing similar aircraft, or for a quick look at one that piques your interest.

Dreaming of loops and rolls? Read the aircraft fact sheet about American Champion’s Decathlon. The overview gives insight into the history of its production, discussing Champion Aircraft Company’s original Citabria and the improvements the company incorporated into the production of the Decathlon. AOPA Pilot writer, Alton Marsh shares, “The Decathlon is the next step up from simple positive-G aerobatic airplanes like the Aerobat or the Citabria. It has what country and western stars call crossover, the ability to please more than one crowd at a time. It can be a trainer and Sunday fun airplane, or it can do serious airshow work. Patty Wagstaff is among the many pilots who have thrilled crowds using a Decathlon.”

Looking for family transportation? If you’ve had enough of crowded highways and traffic jams getting your family to your vacation spot, you might want to compare Cessna’s Skylane and Piper’s Arrow for performance and capability.

If your browsing leads to thoughtful consideration of purchasing an aircraft, we invite you to listen to AOPA’s recorded Webinar on Aircraft Purchasing. Woody Cahall, Vice President of the Pilot Information Center says, “There’s a lot of planning and preparation involved in buying an aircraft, and in this Webinar, AOPA experts answer questions and explain the process.” Topics covered include aircraft valuation, costs and financing, insurance, inspections, required paperwork, title and escrow services, aircraft records, taxes, and more. Representatives from AOPA’s Aircraft Financing Program, the AOPA Insurance Agency, and AIC Title Service also participated to answer questions.

Whether you currently own an aircraft, or are just exploring the idea, we invite you to attend the free AOPA Webinar, Reducing the Cost of Flying, on August 11. Dave Hirschman, AOPA Pilot senior editor and author of the popular “Frugal Flier” column will be joining senior aviation technical specialist, Rodney Martz, to share ways to trim flight costs, both short term and long. Sign up online to join one of two sessions, at 3:00 or 9:00 p.m. Eastern Time.