Get the app Get the app
Already a member? Please login below for an enhanced experience. Not a member? Join today
News & Media Next step toward NextGen

Next step toward NextGen

What does the FAA's ADS-B Out final rule mean to you?

The FAA took a giant step toward implementation of the Next Generation Air Transportation System (NextGen), its initiative to modernize the air traffic control system, in late May when it issued a final rule requiring many aircraft to equip with ADS-B Out capability by 2020. Automatic Dependent Surveillance-Broadcast is one of the primary technologies supporting NextGen, which will shift ATC’s reliance from ground-based radar to satellite-derived position as the basis for aircraft separation and control.

The FAA took a giant step toward implementation of the Next Generation Air Transportation System (NextGen), its initiative to modernize the air traffic control system, in late May when it issued a final rule requiring many aircraft to equip with ADS-B Out capability by 2020. Automatic Dependent Surveillance-Broadcast is one of the primary technologies supporting NextGen, which will shift ATC’s reliance from ground-based radar to satellite-derived position as the basis for aircraft separation and control.

Any aircraft that operates in Class A, B, or C airspace; within the 30-nm Mode C ring around a Class B primary airport; and most Class E airspace at or above 10,000 feet—in other words, everywhere a transponder is required today—will have to equip by January 1, 2020, with an ADS-B Out transmitter to continue flying in that airspace.

ADS-B technology has proven itself in Alaska for more than 10 years through the FAA-funded Capstone program. It’s also operating successfully in low-altitude airspace over the Gulf of Mexico, and in Louisville and Philadelphia.

Concerns about the rule

Most FAA rulemaking is safety-related, but the agency acknowledges that the ADS-B Out rule will not significantly affect safety. Instead, the mandate is intended to help NextGen move forward. “AOPA is not happy about this rule,” said Melissa Rudinger, AOPA senior vice president of government affairs. “We have supported transitioning through a benefits-driven process instead of a mandate—give us some benefits and [general aviation] will equip.”

ADS-B can be a two-way street for information. The FAA’s May 2010 final rule requires ADS-B Out, a broadcast signal providing the aircraft’s location, but does not mandate ADS-B In—which can deliver to the cockpit weather and traffic information that greatly enhances pilot situational awareness. ADS-B In “is where most aircraft owners are going to receive benefits,” Rudinger said. The ADS-B ground infrastructure being developed will support both ADS-B In and Out capabilities.

Expanded coverage would be another potential incentive for GA aircraft owners to equip with ADS-B. The FAA is installing ADS-B infrastructure to provide coverage at least as good as existing radar. The industry has called for future expansion beyond the current radar service area.The FAA plans to complete installation of the nationwide ADS-B ground infrastructure by 2013.

The ADS-B equipment currently installed in fewer than 1,000 aircraft does not meet the final rule’s requirements, although manufacturers believe most equipment could comply after upgrades or modification—engineers still are exploring their options. Eventually, ADS-B may eliminate the need for today’s Mode C transponders—but not in 2020. “The government still needs the transponder to fulfill their responsibility of traffic separation,” Rudinger said. Traffic Alert and Collision Avoidance System (TCAS) equipment installed on airliners and other primarily large aircraft rely on them. The FAA has indicated that transponders should become unnecessary sometime in the future.

Eventually aircraft owners will have to choose between benefits of the two ADS-B systems, the aforementioned UAT, using 978 MHz, or the Mode S 1090 MHz Extended Squitter (ES) broadcast link—the latter is a message the transponder broadcasts automatically, independent of any radar interrogation, over the busy 1090-MHz frequency.

The Mode S option has been agreed upon for international operations, and the FAA rule requires that aircraft operating in Class A airspace use the Mode S-based datalink. However, the 1090 MHz ES link does not support FIS-B weather and airspace information because of the link’s bandwidth limitations. Aircraft flying in ADS-B airspace below 18,000 feet can use either datalink. To maximize potential benefits, the future may see an optional dual-mode ADS-B transceiver, perhaps transmitting on the 1090 MHz ES frequency and receiving on both it and the 978 MHz UAT link. 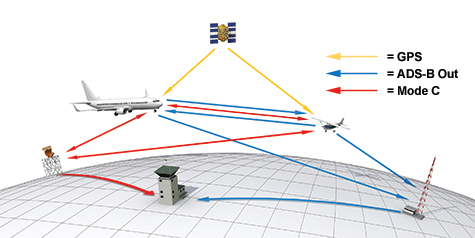 ADS-B is “a really complex subject and pieces of the puzzle continue to appear,” said Bill Stone, avionics product manager for Garmin International. The final rule is more of a business challenge for Garmin than a technological one, he said. “[No pilot] wants to comply for the sake of compliance. ‘If I’m going to spend the money, what am I getting for it?’ That’s the tough question there. What options will allow them to see value?” he said.

“The FAA is really faced with a daunting task of modernizing the ATC system while operating the current system,” he said, and it could have held up ADS-B Out until ADS-B In applications mature—delaying implementation. “Applications are being dreamed up but making them happen is a long, time-consuming process,” Stone said.

“Owners will have to carefully evaluate what’s being offered under the name of ADS-B, because I think the term has been overused,” he said. “This is an investment in infrastructure; it’s not a gee-whiz box in your airplane. It’s the cornerstone of a huge system that will be implemented through it. A decision for quick, low-cost compliance may not be the best decision for the future.

Chris Benich, director of civil aviation in Honeywell’s government relations office said, “What we’re looking for is new ways of using the data to provide benefits for the user, so that the operator is motivated to install it on their aircraft,”

Different operators will see different benefits from ADS-B. For GA, expanded surveillance capabilities at “one-in, one-out” airports would provide better access. Transoceanic operators will benefit from shorter in-trail separation. “Once we settle on standards for alerting to runway incursions, for example, the safety benefit will pay the way,” Benich said. “You need to keep the Mode A/C transponder. You can replace that with Mode S and be compliant, and not have to carry two transponders.” A Mode S transponder installed today will have to be upgraded at some point in the future, he said.

In July, the Soaring Society of America and the FAA, with support from AOPA, collaborated on proof-of-concept flight tests of a prototype low-cost, portable ADS-B transceiver. The prototype was built by Mitre, the private, not-for-profit engineering organization that developed UAT in the mid-1990s.

Mitre had been studying small, unmanned aircraft systems. “We looked at really miniaturizing the size, the weight, and the power requirements,” said Rob Strain, associate program manager for surveillance and broadcast applications. The 9.6-ounce prototype measures about 4 inches by 2 1/2 inches by 1/2 inch and includes a GPS receiver, temperature-compensated pressure sensor, antenna, and battery. Like other current ADS-B equipment, it doesn’t comply with the FAA’s recent ADS-B Out final rule.

The industry and AOPA would like to see transceivers priced below $2,000, and ideally closer to $1,000. The prototype’s low cost of parts should help keep the price down, if a manufacturer chooses to produce the design.

Other products currently on the market are in that price range. NavWorx Inc. offers both portable and remote-mount ADS-B equipment priced from $1,500 to $2,700; SkyRadar’s portable receiver is $1,200 and shows TIS-B and FIS-B data on iPhones and other displays.

Many aircraft owners are wondering what to do in preparation for this mandate that becomes effective in slightly less than 10 years. The smart move right now? Do nothing. The next 12 to 18 months should provide new options and opportunities. Educate yourself, keep up with developments in this arena, and let the technology mature before investing.

Under Automatic Dependant Surveillance-Broadcast (ADS-B), aircraft equipped with GPS receivers automatically transmit their location, altitude, and velocity to ATC ground stations and nearby aircraft. Unlike today’s Mode C transponders, these broadcasts do not result from an interrogation by ATC radar or another aircraft’s collision avoidance system. Cost savings from a reduced ATC radar infrastructure is one of NextGen’s benefits.

Nationwide ADS-B implementation will use two different datalinks—Mode S datalink for airliners and other high-flying aircraft. Universal Access Transceiver (UAT) is expected to be popular with lighter aircraft. The systems operate on different frequencies, and cannot “see” each other. For ADS-B to provide comprehensive traffic information to aircraft capable of receiving and displaying it, a network of ground stations will receive Mode S ADS-B position reports and rebroadcast them to UAT-equipped aircraft—and, similarly, will relay UAT broadcasts to aircraft receiving Mode S datalinks. This is Automatic Dependent Surveillance-Rebroadcast.

The FAA plans a network of about 800 ADS-B ground stations to provide ATC separation services throughout the country, located 150 to 200 miles apart to assure coverage at the rule’s required minimum transmission power (16 watts for UAT, and 125 watts for 1090 MHz ES). This will support ATC in areas where radar service now exists; other than the Gulf of Mexico, where ADS-B is used to control helicopters serving offshore oil platforms, capabilities are not being extended into nonradar airspace. The ground stations are scheduled to be operational by 2013. — MPC