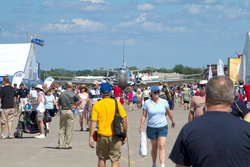 The EAA AirVenture crowd totaled 535,000 this year, including 4,000 people who were issued exhibitor passes to work in the booths and exhibits, and nearly 1,000 with press passes. That’s down 7 percent from last year.

“We had expected to have a slightly lower attendance figure this year after last year’s blockbuster event,” said EAA President Tom Poberezny. “This year’s weather challenges early in the week also had an effect. The second half of the week, however, was outstanding, especially with such activities as those on Saturday that included the night airshow. We were not only very pleased with the attendance figures, but also with the positive response and the upbeat spirit from all those who attended.”

Poberezny called preparations for the event, “The most challenging in my 35 years as chairman, as the rain in July caused major setbacks as we got ready for AirVenture.” Early attendees found ditches still flowing with runoff water and muddy parking fields, many of which had to be closed to cars and airplanes. Aircraft initially were sent to other airports to find drier parking spots.

The International Council of Airshows said attendance is up at many airshows this season—particularly those associated with a military facility. (Not all airshows had increases.) However, attendance figures are not up as dramatically as the 2009 season. Like last season, airshow attendees are doing things closer to home to save on vacation expenses. EAA AirVenture, however, is not primarily an airshow, although there are aerial performances every day, and visitors incur travel expenses to attend. 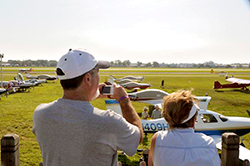 More than 10,000 aircraft arrived at Wittman Regional Airport in Oshkosh, Wis., (or tried to arrive but were turned away because of lack of dry parking spaces) and other airports in east-central Wisconsin. There were 2,380 showplanes, including 1,106 homebuilt aircraft, 635 vintage airplanes, 374 warbirds, 115 ultralights, 120 seaplanes, and 30 rotorcraft.

Commercial exhibitor numbers were 777 (up from 750 in 2009). The number of international visitors who happened to register at the International Visitors Tent totaled 2,167 people from 66 nations, with Canada (586 visitors), Australia (350), and Brazil (221) the top three nations.

Fly-in and drive-in campers are estimated at more than 36,000. There were 979 media representatives on-site from five continents.

“AirVenture has already been designated a major event by the U.S. Navy for its Centennial of Naval Aviation celebration in 2011,” Poberezny said. (The Blue Angels are not scheduled to attend.) “The overwhelming positive response to our inaugural night airshow on July 31 also solidifies our plan to do it again next year.”