Get the app Get the app
AOPA Members DO more LEARN more SAVE more - Get MORE out of being a pilot - CLICK HERE
News & Media Fuller talks engine technology, avgas outlook with TCM head 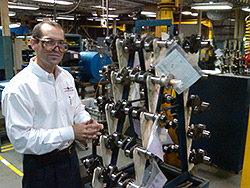 TCM president Rhett Ross (pictured) spoke with AOPA President Craig Fuller about how his company is adapting to a changing marketplace.

With the prospect of a transition to an unleaded avgas on the horizon, many prospective aircraft buyers are taking a renewed interest in what’s under the cowling. AOPA President Craig Fuller met with officials at Teledyne Continental Motors in Mobile, Ala., Aug. 18 to get a firsthand look at the engines and discuss how the manufacturer is planning for an unleaded future.

Fuller is making the rounds of all stakeholders in the issue of removing the lead from avgas to help ensure that the industry arrives at a solution that will work for everyone, from the manufacturers who build engines to the pilots who fly with them. TCM President Rhett Ross, a private pilot and AOPA member, shared with Fuller how his company is adapting to a changing marketplace—by introducing enhancements to its engines such as full authority digital engine control (FADEC), adding diesel engine technology to its portfolio, and testing potential replacement fuels.

Ross said his company began testing various fuels, including automotive gasoline, Swift Fuel, and unleaded variants of 100LL as early as 2008, and has just received samples of the G100UL prototype fuel from General Aviation Modifications Inc. (GAMI) for testing. He also clarified TCM’s position on the search for a 100-octane equivalent to 100LL: The company uses a worst-case-scenario fuel, at 94 octane, as a design point to ensure maximum security and flexibility for customers, he said—but that doesn’t constitute an endorsement. TCM continues to support efforts to find a viable 100-octane fuel. 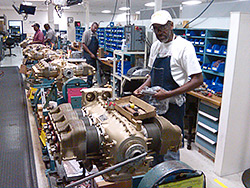 Teledyne Continental Motors Inc. employees work on the assembly line in Mobile, Ala. The company has plans to stay competitive in the global market now while it prepares for the removal of lead from avgas in the long term.

“TCM continues to test concept fuels and collaborate with a wide variety of innovators as it supports the industry’s focus on finding a 100 octane equivalent replacement fuel for 100LL,” Ross said.

While it is preparing for a transition to an unleaded fuel in the long term, TCM is also focused on producing engines for a global market today, Ross said. The company sees a growing interest in turbine engines among aircraft buyers and is also working to certify a diesel engine, a piston alternative to avgas-powered engines that would run on Jet A.