Get the app Get the app
Already a member? Please login below for an enhanced experience. Not a member? Join today
News & Media Associations address new pilots, political landscape 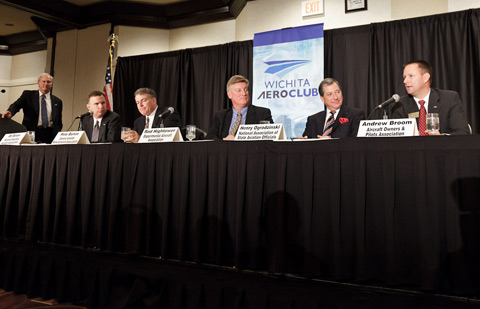 The Wichita Aero Club’s “On-Air Summit” Nov. 30 brought together senior executives from the major general aviation associations to tackle the pressing issues of the day: growing the pilot population, the changing political landscape, the challenge of transitioning to an unleaded avgas, and more.

“It was great to get together with other association leaders to address the challenges we face as an industry,” said Broom. “We’re strongest when we work together, and everyone can do his or her part to get engaged and support general aviation.”

The panelists discussed political and regulatory challenges that face general aviation, such as NextGen air transportation system modernization, FAA reauthorization, and the changing political landscape in Washington, D.C. They also discussed the industry’s plans to move away from leaded avgas—a process they agreed was necessary but that requires deliberation to find a solution for both new aircraft and the existing fleet.

The declining pilot population is a major concern for AOPA and EAA, whose complementary approaches to the problem are designed to carry potential pilots from the moment of inspiration to the achievement of their certificate. Hightower talked about his association’s goals of getting people inspired and into training; Broom discussed AOPA’s flight training student retention initiative, designed to address the 80-percent dropout rate among people who start training. AOPA has regional meetings planned in 2011 to identify best practices among flight schools and instructors and share them with the industry.