Get the app Get the app
AOPA will be closed July 4th, in observance of the Independence Day holiday. We will reopen at 8:30 am ET on Tuesday, July 5.
News & Media Yaw dampers

The name is a misnomer

The term “yaw damper” (not “dampener”) is somewhat of a misnomer in that its purpose is not to reduce yaw. After all, a conventional turn is a yawing and pitching maneuver, and if a yaw damper really did damp or arrest yaw, an airplane equipped with one would not turn very well. 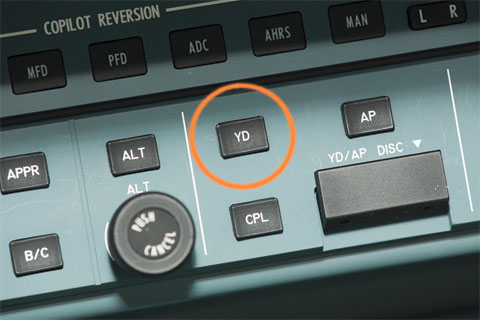 The term “yaw damper” (not “dampener”) is somewhat of a misnomer in that its purpose is not to reduce yaw. After all, a conventional turn is a yawing and pitching maneuver, and if a yaw damper really did damp or arrest yaw, an airplane equipped with one would not turn very well.

A yaw damper prevents slipping and skidding and more properly should be called a slip damper. It consists of a rate gyro in the tail that senses the onset of a slip or skid and sends an electrical signal to a servo that immediately applies just enough rudder pressure to arrest the slip. It is also useful for smoothing flight about the yaw axis during turbulence.

The action of the yaw damper also explains why a pilot is not required to apply rudder pressure when entering and exiting turns in aircraft equipped with one. The yaw damper senses the slipping caused by the adverse yaw effect from aileron deflection. This makes it much easier to fly such airplanes than conventional airplanes that do not have a yaw damper. A pilot can roll in and out of turns with his feet flat on the floor, and the slip/skid ball remains nicely centered.

The yaw damper became popular on turbojet- and turbofan-powered airplanes because it overcomes instability about the yaw axis common to airplanes with swept wings at high altitude. It also prevents Dutch roll, a yaw/roll coupling that if not corrected can become dynamically divergent (worsen) if left unchecked and cause loss of control. This is why a yaw damper also is called a stability augmentation system (SAS). By reducing or eliminating aircraft yawing (fishtailing), the damper improves ride comfort.

Engaging a yaw damper is as simple as pushing a button. Depending on the airplane and avionics manufacturer, it’s sometimes possible to disengage the autopilot while still retaining the yaw damper. In the Pilatus PC-12, for example, pressing down halfway on the red control-yoke-mounted autopilot-disengage switch kicks off the autopilot, but leaves the yaw damper on. Just remember to leave the yaw damper off for takeoffs and landings or you will fight it should you need strong rudder deflections to deal with crosswind corrections or stopping the yaw created by a twin’s failed engine.

The Boeing 727 was particularly in need of yaw dampers. These were so critical to flight safety that the 727 had two of them, one to operate the upper rudder and the other to operate the lower rudder. During Boeing 727 transition training, pilots were advised that a failure of both yaw dampers above FL 350 (such as would occur during a total electrical failure) would result in an irrecoverable loss of control (referred to by insurance carriers as a hull loss). There presumably was no way for a pilot to recover from the “three-holer’s” instability at high altitude without at least one operative yaw damper. Needless to say, many pilots would not operate a Boeing 727 above FL 350. (According to the operating limitations of the 727-100, for example, an immediate descent to FL 260 is required in the event of a single yaw damper failure.)

Modern turbofan airplanes have full-time yaw dampers that do not have to be turned on and off by the pilot. Aircraft such as the Beechcraft Bonanza have an optional, part-time yaw damper that is turned on after takeoff and turned off before landing. A yaw damper eliminates the Bonanza’s fishtailing, an unpleasant characteristic familiar to all who fly this otherwise marvelous airplane.