Get the app Get the app
AOPA Members DO more LEARN more SAVE more - Get MORE out of being a pilot - CLICK HERE
News & Media Pilots fly holly, gifts to island in Tangier Holly Run 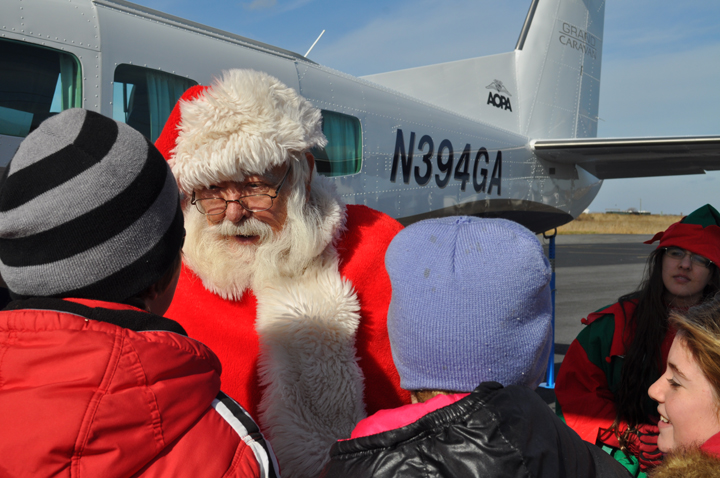 Santa seemed right at home with a blustery wind from the North sending him and Rudolph One to Tangier Island Dec. 4 to bring toy cars and dolls, coloring books and crayons, balls and bats, and knit caps to children on the remote island off the Virginia coast in the Chesapeake Bay.

“The plane is gassed up, ready to go!” Santa exclaimed to pilots chowing down on pancakes, sausage, bacon, and orange slices in the Chesapeake Sport Pilot hangar at Bay Bridge Airport. His sleigh, AOPA’s Cessna Caravan, was dubbed Rudolph One and filled with toys and eager helpers, including three young elves. The pilots also would become elves for a day to ferry fresh-cut holly as a gift to the 600 island residents. They use holly to decorate their homes and golf carts. Few families have cars on the tiny island, most opting to travel by golf cart on the narrow roads. In December, the fire department hosts a Christmas parade and judges which golf cart is the most decorative.

With below-freezing temperatures in Maryland Saturday, many pilots had to devote extra time to their normal pre-flight procedure to remove frost from the aircraft before departing for Bay Bridge Airport, the designated meeting area for the forty-first Holly Run. AOPA President Craig Fuller departed AOPA headquarters at Frederick Municipal Airport in central Maryland in the Caravan shortly after 7 a.m. to pick up Santa before heading to Bay Bridge. (See Fuller’s blog entry about the trip, “ Bringing Christmas to one small island.”) 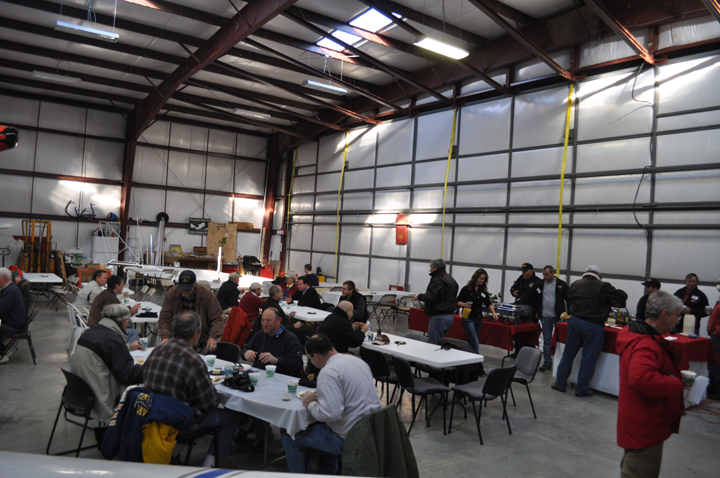 “I’ve been ready since about five minutes after I got up this morning,” one participant shared over breakfast as pilots continued to pile into the hangar, tables set up among a Sky Arrow 600 Sport and Patriot Sport Cruiser, and beneath a wingless red-and-black 1946 Piper Super Cruiser hanging from the ceiling. Chesapeake Sport Pilot owners Al Adelman, son Tim Adelman, and Jason Levin set up the breakfast line and flipped 500 pancakes just in front of the 50 white trash bags of holly to be delivered.

“It’s just something that would appeal to pilots as a neat adventure with a good cause at the heart of it,” Tim said of the event’s success. He had participated in the event for four years before helping to host it for the first time this year at Bay Bridge on Maryland’s Eastern Shore.

Pilots quickly turned their attention from breakfast as sounds of a turboprop drifted into the hangar, and a momentary hush was quickly replaced with chatter that it must be AOPA’s Caravan.

“That’s it!” one pilot exclaimed after peeking out the door to see what had caused such a stir.

“The most exciting moment will be when Santa steps out of AOPA’s Caravan for the kids who are eagerly awaiting him,” Fuller said in anticipation of landing at Tangier Island Airport. “The Caravan has that big pod underneath, and it is loaded!”

Before grabbing a bag of holly to depart, pilots gathered for a safety briefing and a few words of encouragement.

“I don’t think I’ve ever had as much fun as being designated Rudolph One to pick up Santa and the presents,” Fuller told the group. “We look forward to seeing everyone down at Tangier.”

Ed Nabb Jr., whose family has hosted the Holly Run for 40 years, also welcomed pilots, explaining, “This means something to those folks on the island.” The island museum has an exhibit about the Holly Run that Nabb’s family started with a single Ercoupe in 1968. Last year, Woods helped Nabb host the event at Cambridge before transitioning to Bay Bridge this year. “Have a safe flight,” he said. “I hope this is something you’ll decide to make a tradition.”

Santa led the 71-nautical-mile flight to Tangier Island Airport, followed by a formation of RVs and a string of dozens of single- and twin-engine aircraft. Three RVs flew a low pass over the airport in formation with smoke trailing to signal Santa’s arrival.

“Did you see those planes?” a child asked his friend as they waited to help Santa unload the gifts. “One was smokin’!” 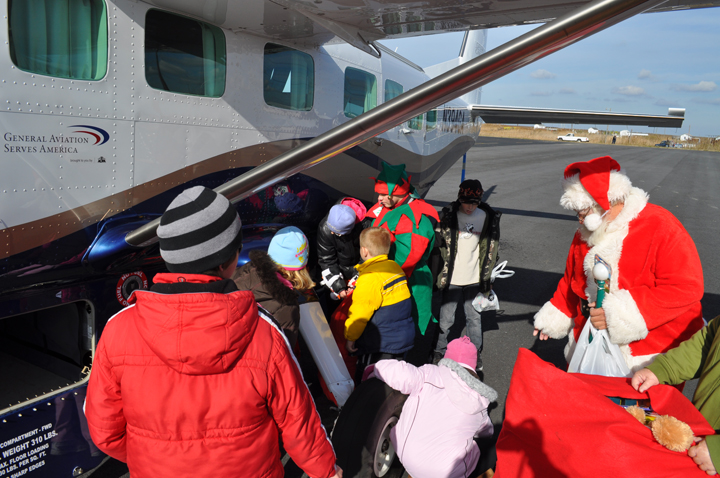 A handful of children braved the cold to meet Santa at the airport, something they look forward to, according to Tangier Island Mayor James “Ooker” Eskridge. “The kids, they really look for it,” he said, explaining that they watch for the first airplane to fly overhead as their signal to head to the airport.

Children and elves climbed in the Caravan’s cargo pod to get every last toy, and golf carts were loaded with heavy red bags to be taken to the community center where dozens more children were waiting.

“Do you guys want to sing ‘Jingle Bells’ first or get presents?” Santa asked a room full of children.

“I shouldn’t have asked that,” he joked.

Children chattered with their parents as they opened their toys and began playing with dolls and rolling monster truck toys across the community building’s floor.

“I got it!” one young blond boy exclaimed, his tiny arms barely reaching around the red monster truck and football that he received from Santa. He quickly found an open spot at a table near Alliance for Aviation Across America Executive Director Selena Shilad for some play time. Later, he charmed another toy car from Santa and enlisted Shilad to help him open the gift and get the car rolling.

“It’s a great event,” said Shilad, who flew with Santa on the Caravan. “It’s a great example of general aviation in action—getting out there to areas that are a little remote.”