Get the app Get the app
AOPA will be closed July 4th, in observance of the Independence Day holiday. We will reopen at 8:30 am ET on Tuesday, July 5.
News & Media &lsquo;New&rsquo; Wright B model flying 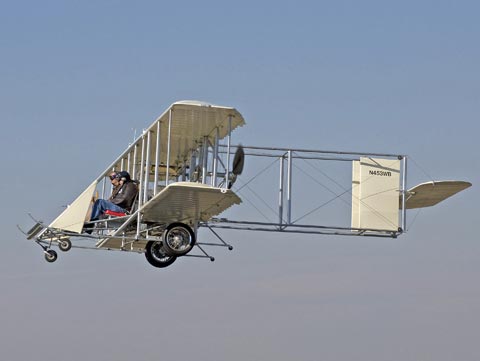 A one-of-a-kind airplane designed to showcase Dayton, Ohio’s aviation heritage around the world has made brief hops off the ground and is ready for a formal flight test program next spring. It was built by an all-volunteer group.

Since October, volunteer test pilots have put Wright B Flyer No. 002 through a series of low- and high-speed taxi tests at Dayton-Wright Brothers Airport, where Wright B Flyer Inc. has its hangar and museum. Pilots also have made 76 brief hops in which the airplane rose several feet into the air but remained above the runway. It will cruise at 70 mph.

Dubbed the “Silver Bird” because of its silver-painted steel frame, the airplane is built to modern standards but resembles the Wrights’ first production flyer, the Model B. It has been in development since 2007, when the organization decided it needed a second Model B lookalike that was easy to ship, assemble, and fly at international events.

The organization’s flagship Model B, the familiar “Brown Bird,” has been flown at events across the United States and shipped as far as Berlin, Germany, for displays. But tearing it down, shipping it, and making it flyable again is expensive and takes a large crew of skilled volunteers.

“This airplane extends our reach in promoting our aviation heritage and Ohio’s aerospace business. We used to have regional markets. We have a global market today, and there’s no place in the world we can’t take this airplane,” said John Bosch, chairman of Wright B Flyer’s board of trustees.