Get the app Get the app
Already a member? Please login below for an enhanced experience. Not a member? Join today
News & Media Vermont proclaims value of GA 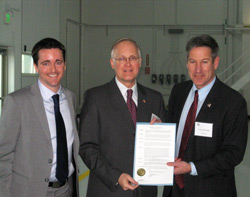 While some may see red hearts this month, Vermont Gov. Jim Douglas and Lieutenant Gov. Brian Dubie want state residents to look up and see blue skies. On Feb. 18, Douglas signed a proclamation declaring February to be “Aviation and Aerospace Appreciation Month.”

Douglas signed the proclamation during an open house hosted by the Vermont Aerospace and Aviation Association (VAAA), an organization chaired by Dubie. Dubie, who is an airline captain, invited AOPA Manager of State Legislative Affairs Mark Kimberling to join him at the podium during the ceremony as he spoke about the value of aviation to the state.

“As we look at our growing aviation and aerospace industry, general aviation is a vital component of that,” he said. He stressed the importance of attracting GA pilots to Vermont--“and AOPA can help us with that,” he said.

The declaration cites the strong aviation presence in his state. The Vermont aviation and aerospace sector provides more than 2,800 jobs, from creating aircraft and avionics parts such as tires and carbon composites to engine manufacturing and aerospace defense.

In the general aviation sector, the proclamation states that Vermont depends on GA for “mobility, access to medical treatment, economic opportunity, disaster relief, and a wide range of critical resources.”

Kimberling said the proclamation is a welcome recognition for an embattled industry.

“These are challenging times for general aviation—we have been fighting off excessive new tax proposals and aviation funding raids across the county from lawmakers that don't necessarily understand the breadth and value of GA in their states,” Kimberling said. “It's very significant for the leaders of Vermont to deliver a clear message in support of general aviation right now—to everyone in Vermont and beyond.”

Neither Douglas nor Dubie is a stranger to aviation. In August of 2003, Douglas created an aviation advisory council in order to engage all stakeholders in the state’s aviation programs. Dubie is the chair of VAAA and the chair of the Aerospace States Association.