Get the app Get the app
AOPA Members DO more LEARN more SAVE more - Get MORE out of being a pilot - CLICK HERE
News & Media Have history, will travel

Have history, will travel 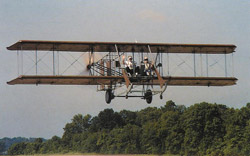 Wright B Flyer Inc., a nonprofit aviation history organization in Dayton, Ohio, has dispatched 13 people and two replicas of the famous 1910-1913 Wright B Flyer to Texas to take part in a historical celebration.

It was the first mass-production Wright airplane. More than 100 were built by the Wright Brothers, either by them or under license around the world.

The aircraft will take center stage in San Antonio on March 2 when two Wright B Flyer aircraft take part in a celebration of the first military solo flight from a military airfield at Fort Sam Houston. One is an exact replica while the other is a “lookalike,” Dayton officials of the Wright B Flyer organization said.

On March 2, 1910, Army Lt. Benjamin Foulois made the first military solo flight from a military airfield–Fort Sam Houston’s parade field. The airplane he flew, Army Signal Corps No. 1, was a 1909 Wright Flyer built in Dayton by the Wright brothers.

The organization sends its Wright B lookalike and replica aircraft around the world to historical celebrations on a limited schedule. A replica that can be folded and loaded into a shipping crate is under construction and will be used to support a greater number of events.

“It’s the first time we’ve deployed two airplanes simultaneously to an out-of-town event,” said Mitchell Cary, Wright B Flyer Inc.’s president and chief pilot. “This probably is the largest crew we’ve put on the road, out of necessity,” he said.

It isn’t the group’s first visit to San Antonio. Cary said volunteers took a Flyer there in 1987 to help celebrate the seventieth anniversary of Brooks Air Force Base. 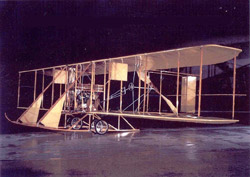 A San Antonio-based chapter of the Order of the Daedalians, a fraternal organization of military pilots, requested Wright B Flyer’s participation in the March 2 event and is underwriting the cost with private donations.

“The year 2010 has been declared the Centennial of Military Aviation in Texas with activities all year long. The big kick-off for the whole program will be the Foulois Centennial,” said Bill Stewart, heritage officer for Order of the Daedalians Stinson Flight No. 2 and a retired Air Force colonel.

To accomplish this safely, Wright B Flyer will use two airplanes.

Its “Brown Bird,” a modern airplane built to look like a Wright Model B Flyer, will be flown from nearby Stinson Municipal Airport for flybys during the ceremony. On the parade field below, volunteers dressed in period Signal Corps uniforms will taxi the “Yellow Bird,” a close replica of a Wright Model B that is used for ground displays.

Neither airplane looks exactly like the Wright machine Foulois took to Texas. “We’re the closest thing to a 1909 Flyer that’s available,” Cary said.

Foulois’ first flight is historic in more ways than one. He’d had just 54 minutes of instruction from Wilbur Wright at College Park, Md., when Brig. Gen. James Allen, chief of the Signal Corps, dispatched him and the airplane to Fort Sam Houston with orders to “teach yourself to fly,” according to Foulois’ memoir, From the Wright Brothers to the Astronauts.

Foulois wrote that he exchanged letters with the Wright brothers, who offered tips on controlling the machine. That correspondence “later led him to describe himself as the first pilot who had ever learned to fly by mail,” said Tom Crouch, senior curator of aeronautics for the Smithsonian Institution in Washington, D.C., where Signal Corps No. 1 is on display in its original configuration.