Get the app Get the app
AOPA will be closing at 2:30pm ET Wednesday, November 23rd, and will remain closed Thursday and Friday in observance of the Thanksgiving holiday. We will reopen Monday November 28th at 8:30am ET.
AOPA Members DO more LEARN more SAVE more - Get MORE out of being a pilot - CLICK HERE
News & Media Valkaria Air Fest: Made by pilots, with pilots, for you

Valkaria Air Fest: Made by pilots, with pilots, for you 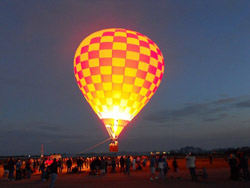 When you need to put your airport in the best light, show, don’t tell.

Aviation enthusiasts weren’t alone in orchestrating this airshow; the Grant-Valkaria EAA Chapter, the Melbourne Area Pilots Association, and the local Civil Air Patrol squadron assisted in the event. The community benefitted the most from this collaboration: Citizens saw local businesses that use aviation to provide jobs; law enforcement agencies displayed their use of the airport; and the community had the chance to take a first flight in an airplane or helicopter.

This celebration of aviation comes after a long battle by the local pilot community and AOPA to keep aviation alive in this area of Florida; not long ago, the prospect of learning to fly in Grant-Valkaria was a thorny one. The town tried to restrict flight training, they lost. The town then tried to request jurisdiction over  the county-owned airport, they failed.

Others stepped in to help, and the FAA said that the airport was still under grant obligations; the Florida State Attorney General’s Office also noted that the city couldn’t deny access to any aeronautical user, close the airport, prohibit touch and goes, or prohibit aircraft runups, among other things. The nearby Melbourne Area Pilots Association and local AOPA Airport Support Network volunteers also came to the aid of Valkaria.

AOPA hosted booth at the show, manned by AOPA Manager of Airport Policy John Collins, who emphasized how pilots and aviation enthusiasts need to engage their communities.

“When you want to put your airport in the best light, put on an airshow,” Collins recommends. “Not only do you show pilots and your airport at their best, but the opportunity to work together with different airports and aviation segments becomes priceless.”