Get the app Get the app
News & Media Get off the fence: It&rsquo;s time to engage everyone in aviation

Get off the fence: It&rsquo;s time to engage everyone in aviation 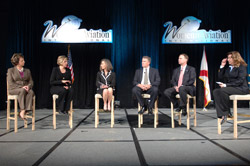 General aviation leaders gathered at the Women in Aviation conference to discuss ways the industry can come together and engage in aviaiton.

Pilots must reach beyond their small, close-knit community to engage everyone in aviation, representatives of the nation’s aviation associations said Feb. 26 at the twenty-first annual International Women in Aviation conference in Orlando, Fla.

Studies show that 70 percent of people who get started in flight training eventually drop out, said Karen Gebhart, president of the AOPA Foundation, the central philanthropic arm of AOPA. Those who don’t finish generally cite time and money as their reasons for dropping out, but “they have time and money to do other things,” she said. There’s a need to push further and find out the answers to these questions, she said, adding, “Once we get the answer, we will work with others in the industry to address these issues.”

In the meantime, pilots need to become more vocal about the positive aspects of flying, Gebhart said. “We’re ambassadors, and we’re not doing a good job of it.” AOPA President Craig Fuller has dubbed 2010 the year to engage in aviation, and has urged members to become more engaged with the issues and decision makers that help to determine GA’s future. AOPA Online has created a special page that lets members know how they can stay informed about the issues that affect their flying or host a major public event at their airports.

Ed Bolen, president of the National Business Aviation Association, echoed that theme, stating, “There’s no group that has more of a shared passion than we do. The challenge is to turn that passion into engagement.”

Bolen cited “an enormous coming together within the general aviation community.” “It was easy for us to see what separates and divides us but over the last 18 months we’ve seen what unites us,” he said. He urged the aviation community to express itself on Capitol Hill. “All of us in every aspect of aviation have an opportunity to tell a good story,” he said.

Sharing the passion and fun of flying is a huge part of the Experimental Aircraft Association’s mission, EAA Vice President Elissa Lines said. “EAA’s visions and goals are geared toward growing aviation through participation,” she said, pointing to EAA’s Young Eagles program, in which members take young people on free introductory flights. The association last year added a new component to the program: access to free online ground school instruction through Sporty’s. More than 2,200 youngsters are taking ground school instruction right now, she said. EAA hopes to spread that message even more widely on May 15, which has been designated the International Learn to Fly Day, she said.

Aviation has a vested interest in making sure that it isn’t unfairly singled out in favor of other forms of transportation, according to Pete Bunce, president of the General Aviation Manufacturers Association. “This form of transportation is safe and secure,” he said, but “when we look at Austin, it translates to pressure on Capitol Hill.”

The key to standing up to pressure on Capitol Hill and building the pilot population is creating a unified, engaged front of pilots. As national GA advocacy organizations continue to build their relationship and reach out to those inside and outside the GA community, pilots can begin doing the same.